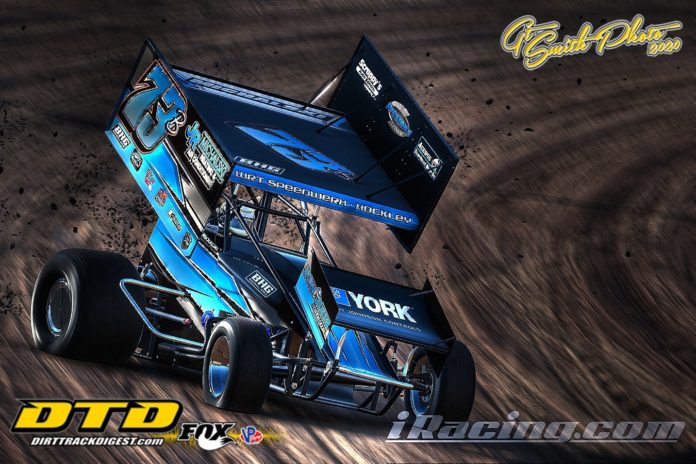 BREWERTON, NY – Last time around Brett Michalski did a great job representing the special invite drivers in the Lockdown Showdown.  The Pennsylvania Posse driver completed the podium behind two of the best iRacers in the country.

For round two of the Dirt Track Digest COVID-19 shutdown race series, Michalski is back and leading the charge for the invite drivers against the iRacing regulars in the Billy Whittaker Cars & Trux Confinement Classic at the virtual Eldora Speedway.  The 410 Sprint Car regular is looking for a two spot in improvement in the Confinement Classic.

Giving a serious challenge to Michalski is going to be another iRacing expert in Kevin Swindell.  Swindell is a two-time winner this year with the virtual NOS Energy Drink World of Outlaws. Swindell will be a real threat to the iRacers in the event as he looks to take his Swindell SpeedLab No. 39 to the front.

Another newcomer to the special invite list is Justin Grant.  Grant is an accomplished USAC racer in non-wing Sprint Cars, Silver Crown as well as Midgets.  He a multi-time winner of qualifying night action at the Chili Bowl in Tulsa, Okla.  Like Michalski and Swindell, he’s also an accomplished iRacer.

Leading the charge for the Modified contingent for the second race in a row is Mike Mahaney.  Mahaney was the highest finishing Northeast Modified driver in the last event where he finished 13th.  He’s joined by Sprakers, N.Y., driver Stewart Friesen.  Friesen was quick at the virtual Knoxville Raceway easily making the show.  He’ll look to do the same at Eldora as will Larry Wight.  Wight also transferred to the finale of the Lockdown Showdown only to have a tough final night.


Anthony Perrego returns to the fold along with Syracuse, N.Y., driver Chris Hile.  Perrego just missed qualifying for the Lockdown Showdown while Hile hopes to make it to the Saturday night program this time around.  Central New York driver Jimmy Phelps is a new Modified name added to the Confinement Classic.  Phelps has been honing his skills on iRacing the last month.  The Baldwinsville, N.Y., driver is ready to tackle the virtual Eldora Speedway.

Canada is well represented by a pair of Modified drivers in Chris Raabe and Chris Herbison.  Raabe was the 2019 Mohawk International Raceway Champion who is still learning the iRacing ranks.  Herbison, a multi-time winner at Brockville last season, is hoping to show speed and make the Saturday night program.

Billy Whittaker retired from big-block Modified competition in the last few weeks, but he didn’t retire from online racing.  Whittaker is getting up to speed on iRacing and hopes to challenge for a spot in the big dance as does Lebanon Valley Speedway driver Keith Flach.  Flach is bringing his knowledge of the high banks of ‘The Valley’ to the high-banks of the virtual Eldora Speedway.  The final Modified entrant secured recently is Southern Tier standout Nick Rochinski.  Rochinski is a master of the bullrings of Penn Can and Five Mile Point.  He was a multi-time winner at ‘The Home Speedway’ of the Southern Tier in 2019.

Michalski isn’t the only Pennsylvania Posse member to try his luck in the Billy Whittaker Cars & Trux Confinement Classic as Lance Dewase has returned.  Dewease had some horrendous luck in the Lockdown Showdown.  He was leading a heat race on qualifying night before getting into a tangle.  The same happened in the night’s C-Main.

Elida, Ohio driver Max Stambaugh joins the fray for the first time.  Stambaugh was the 2017 All-Star Circuit of Champions Rookie of the Year when he finished fourth in points.  In 2019, Stambaugh finished fourth in FAST Series for the 410 Sprint Cars while also scoring a win in the prestigious John Reeve Memorial at Butler Speedway.

The Lucas Oil Empire Super Sprints bring three drivers to the party led by Jordan Poirier.  Poirier finished 22nd in the Lockdown Showdown after getting into an early jingle in the A-Main.  The Quebec driver will want a bit more out of the Confinement Classic.   The ‘Honey Badger’ Sammy Reakes IV is back.  He fell short two weeks ago finishing in the back of the B-Main.  New to the list is multi-time winner with the series Billy VanInwegen.  VanInwegen recently upped his iRacing system in order to improve results.

Matthew Henninger is back on board as an invite driver as well.  Henninger is the owner of Wicked Cushion and has continued his support of the iRacing world, including support for multiple-teams in the Confinement Classic.  He also promotes numerous iRacing events.

The Billy Whittaker Cars & Trux Confinement Classic presented by Dirt Track Digest is an iRacing event being held at the virtual Eldora Speedway. The entire program will be broadcast live through the Dirt Track Digest Facebook page and on DirtTrackDigest.TV in full HD with racing beginning at 8 p.m. on Thursday, April 23 for DIG Race Products Qualifying Night and for Burton’s Logging & Equipment Qualifying Night on Friday, April 24. The Saturday night program begins at 7 p.m. The feed features a Dirt Track Digest TV Xtra format with live scoring and in race commentating from the Ground Control Lawn and Snow Studios with Northeast announcers Shane Andrews and Mike Mallett.

NOTE:  A minimum of 10 of these drivers will advance to the final program on Saturday night.