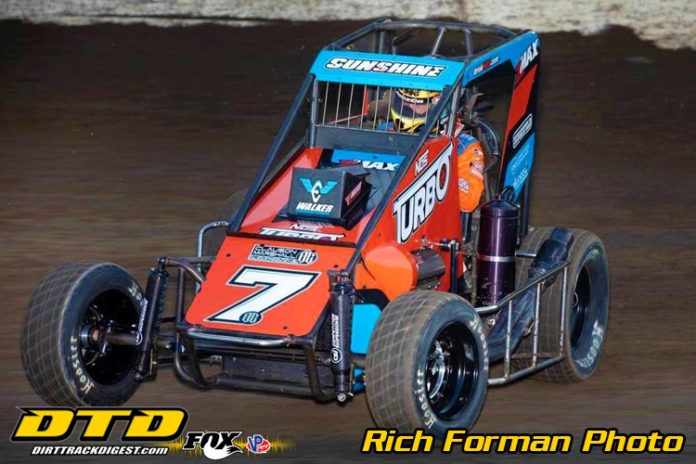 TULSA, OK – It’s been quite awhile since Tyler Courtney and the USAC NOS Energy Drink Midget National Championship were last in competition – 76 nights to be exact.

A little rust here and a few cobwebs to knock out there, the quarantine period during the COVID-19 pandemic around the world has knocked anybody and everybody off their normal routines.

But what has become routine over the last several years is a Courtney feature victory and the defending champ once again nestled into that routine Friday night for his first series victory of the year in the inaugural Werco Manufacturing T-Town Midget Showdown presented by B & H Contractors at Port City Raceway in Tulsa, Okla.

While it wasn’t exactly a rough start to the season by any stretch for the Indianapolis, Ind. driver with a 4th, a 2nd and a 20th in his first three series starts, Courtney and the Clauson-Marshall Racing team dug deep during the time off to find that little bit of “extra” to propel them back to victory lane where they had resided eight times a year ago, including three of the first four, with the series.

“We made a few changes during quarantine and I think we found some stuff,” Courtney admitted after capturing the victory in is NOS Energy Drink Turbo – ZMax/Spike/Stanton SR-11x. “I was a little rusty on the cushion there at the end of the race, and I need to get a little better at that. I saw those guys coming on the bottom, but I was kind of committed to the top by that point.”

Courtney was referring to his late-race execution there, but first, he had to charge from the sixth starting position after establishing a track record earlier in the night during Fatheadz Eyewear/MSW Motorsports time trials, a lap of 9.444 seconds around the 1/8-mile dirt bullring, the first sub 10-second qualifying quick time lap in a USAC National Midget points race since John Andretti at the Toronto Skydome in 1993.

It was Courtney’s CMR teammate Cole Bodine who established the early lead from the pole after an early side-by-side scuttle with outside front starter Chris Windom. Windom remained up top and eventually drove by on lap five for the race lead.

Courtney moved into the top-five on lap 10, passing second quickest qualifier Thomas Meseraull for the position. Moments later, Meseraull’s bid for a frontrunning result came to an abrupt halt when he contacted Courtney’s rear bumper and slid to a stop. Meseraull restarted and finished 13th.

Nearing midway, Courtney had closed in on a three-car tussle for second, which also involved Tanner Thorson and Buddy Kofoid. On the 21st lap, Courtney emerged from the herd with the runner-up spot, although Windom still held a hefty lead of nearly two seconds ahead of him.

That advantage was erased on the following lap when 15th running Daison Pursley stopped at the top of turn four, thus bringing out the yellow flag and bunching up the field for the restart. Courtney gripped low while Windom ran the top, but on the 25th lap, Windom’s slight stumble on the turn one curb gave Courtney the crack in the door he needed to get through as he jolted to the race lead.

Windom remained in touch with his former CMR teammate Courtney just prior to a yellow for first-time USAC starter Emerson Axsom who spun between turns three and four.

Following a restart with 10 to go, Windom ultimately recharged the figurative batteries and made his bid to overtake Courtney, successfully sliding past in turn two with eight laps remaining. Courtney instantly ducked to the inside of Windom exiting turn two, and to Courtney’s left, both Logan Seavey and Thorson created two more lanes of space on the bottom to briefly make it four-wide for the lead.

Courtney escaped the jam and entered turn three on the bottom with the lead with Windom going topside back to second and Thorson and Seavey getting momentarily shuffled out. Windom took one more run at Courtney in turn three to no avail just as the red flag flew on lap 34 when Hank Davis and Clinton Boyles made contact in turn one, sending Boyles flipping near the outside wall. He was uninjured.

On the ensuing restart, Courtney utilized a quality start on the opening lap to carve out some distance between he and Windom. A hard-charging Seavey, who started all the way back in 19th, picked his way to second past Windom on the bottom with four to go and tried to hunt down Courtney, but time was short his hourglass was out of sand.

The checkered flag was Courtney’s for the 14th time in his USAC NOS Energy Drink National Midget career, tying him with Chuck Arnold, Jack Turner and Leroy Warriner for 49th all-time.

“It feels really good, especially being the first time back,” Courtney said. “It’s cool to come to these races when your friends Xia Xianna and Brady (Bacon) are promoting it, and stepping up, especially in a hard time like this. Thanks to them and Mike and Megan Eubanks who’ve done a hell of a job with this place.”

Courtney competed in a micro sprint in his only previous Port City racing experiences, but this marked his first visit in a midget at the track, and after Friday’s triumph, he’s looking for even more on Saturday night.

“Tomorrow’s going to be a tough one,” Courtney continued when speaking of Saturday’s night two of the T-Town Midget Showdown. “All these guys are going to keep getting better, so you can’t slouch off. Hats off to my whole team who’ve worked their tails off with nothing really to do; they haven’t backed down.”

Sutter, California’s Seavey made his debut in the Reinbold-Underwood Motorsports Midget a memorable one, driving from 19th to 2nd to earn Hard Charger honors courtesy of KSE Racing Products and Jerry Medlin in his AME Electrical Contracting – ZMax/Spike/Stanton SR-11x.

“We just had a heck of a racecar there,” Seavey exclaimed. “I feel like we’ve struggled the past couple of days, but finally got the car gripped up to where I could drive through the slick and keep the car straight. That’s really what you need on a track like this.”

“I feel so good,” the 2018 USAC NOS Energy Drink National Midget champ stated. “I really wish we could’ve gotten by Sunshine (Courtney) there. He’s passed me a lot driving through the slick while I’m up there pounding the curb, and I was hoping we could reverse the roles tonight but didn’t quite get it done. I needed to make a few better moves once I got into the top-five; I just wasn’t quite pouncing on the opportunities like I needed to. That’s kind of what ended it for me once Sunshine got out to a little bit of a lead, I could close a little bit, but I knew there wasn’t enough to get all the way there.”

Windom (Canton, Ill.) led a race-high 20 laps, and after losing the lead with 16 laps remaining, came back with a strong second effort, although he fell to third at the conclusion after admitting to needing to “make a few less mistakes” in his Tucker-Boat Motorsports/NOS Energy Drink – Pristine Auction – K & C Drywall/Spike/Speedway Toyota.

“We got the lead and I started hitting the curb a little bit and getting tight on entry and Tyler got by us,” Windom recalled. “We had a hell of a race back to the lead, but (Courtney) was just a little better at the end than I was. Obviously, we’ve got a really fast racecar and these guys are at the top of their game.”

**Matt Sherrell flipped during the third heat. Clinton Boyles flipped on lap 34 of the feature.