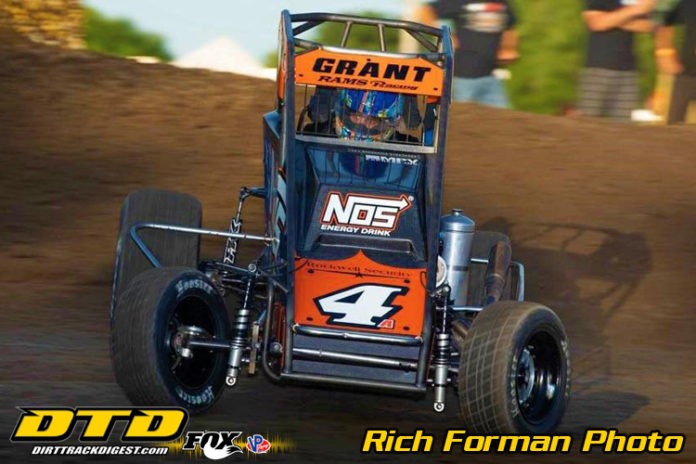 TULSA, OK – In any instance, you take inspiration from anywhere you can gather it up.

“This track was a ton of fun, just right on the fence, banging the curb,” Grant colorfully explained. “We were watching Fast Times at Ridgemont High this morning and Spicoli said, ‘It’s a way of looking at that wave and saying, hey bud, let’s party.’ That’s how I felt tonight. You always want it to end when you’re leading, but I almost wish that thing was 80 laps, I was having such a good time.”

To steal (paraphrase) another line from Spicoli while we’re at it, “Racing’s not merely a sport, it’s a way of life, it’s no hobby.” Grant has made winning a way of life in USAC competition, but this was just the fifth career series win for the Ione, Calif. native and second for the RAMS Racing team with whom he joined at the beginning of the 2019 season.

“About time I got this (car) back in victory lane,” Grant exclaimed after wheeling the RAMS Racing/NOS Energy Drink – Rockwell Security – Veterans Community Projects/Bullet/Stanton SR-11 to his first triumph of the season. These guys have been spending money like crazy and I haven’t been getting them to victory lane. Glad I could, finally.”

Grant began the 40-lap feature from the third spot as a flurry of activity surrounded him on the racy 1/8-mile dirt oval. Pole sitter Kevin Thomas Jr. led the opening lap on the bottom, but Chris Windom rode the rim up top, then split across and between both Thomas and Grant to scurry to the bottom of turn one, sliding up in front of Thomas to put his name on top of the leaderboard while Grant secured the low lane to move to second.

Following a restart due to sixth-running Daison Pursley getting sideways and stopping in turn one, the 11th lap saw Grant make his move to slip by Windom, leading at the stripe by a mere car length. Windom wasted no time trying to return the favor as he slid past Grant utilizing the bottom entering turn one. Nearing turn two, the pair made contact, with Grant’s right front wheel hopping over Windom’s left rear.

The duo kept the train a rollin’ and Grant recovered a half-lap later when he took his chances on a turn three slider that successfully prevailed and instantly jettisoned Grant to an advantage he wasn’t soon going to lose, that is if it went clean and green the rest of the way.

The story for Grant became as repetitive as the lyrics to “Surfin’ Bird” by The Trashmen. Grant got a great start, steadily built up his lead while an incredible race for position occurred behind him between Windom, Thomas, Jason McDougal, Cole Bodine and Thomas Meseraull, among others, in a relentless boxing match where the combatants traded jab after jab. Then, a yellow flag would ultimately fly for a caution, erasing Grant’s lead.

On the 26th lap, Kevin Thomas Jr. reloaded and went on the attack for second, trying to slide past Windom entering turn one. However, halfway up the banking, the car locked up and Thomas skidded to a stop, ending his fine run, and relegating him to a 14th place finish at race’s end.

That dismantled Grant’s two-second lead, and on the ensuing restart, he reconstructed a 1.6-second advantage before Presley Truedson, making her first career series start, stopped along the wall in turns three and four.

Grant got back on the horse again, and within two laps, had another gargantuan 1.879 lead. Gargantuan, considering Cannon McIntosh’s track record run in qualifying stopped the watches at a ripping 9.398 second clip. Speaking of McIntosh, he was the subject of the next yellow on the 31st lap as he jumped the cushion and got into the turn four wall and stopped while contesting for the second position with Windom.

In just five more laps after the lap 31 restart, Grant’s lead ballooned to over three seconds when series Rookie Jesse Love flipped in turn two on the 36th circuit. That reset and re-racked the lineup once more as Grant shot away on the restart and was primed and headed for the promised land, but as he approached the white flag, Clinton Boyles took a second tumble in as many nights in the fourth turn. He was uninjured.

In the final two-lap sprint, Windom took a run at Grant, but didn’t have enough oomph to slide past Grant who ripped the lip to pull away for a 1.322 second victory over Windom who did his best Teflon impression to withstand every single challenge thrown at him throughout the feature. Tyler Courtney, Cole Bodine and Logan Seavey rounded out the top-five.

Priority Aviation added $1,000 to Grant’s winner’s share to make it a $4,000 night for the victor. Beaver Stripes also stepped up with an extra $1,000 added to the night’s total prize money.