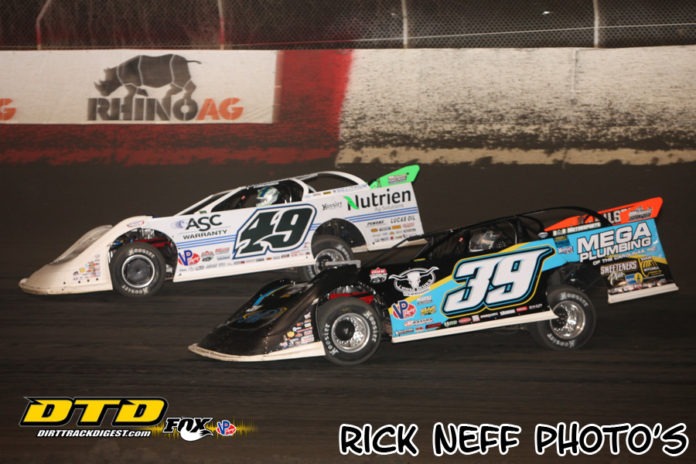 TAMPA, FL – Defending Series champion Jonathan Davenport came from the fifth starting spot to win Monday Night’s Lucas Oil Late Model Dirt Series event at East Bay Raceway Park.  Davenport took the lead on lap 31 from fellow Georgian Shane Clanton and then pulled away for his eighth career win at “The Clay by the Bay.”
Clanton led 29 laps of the 40 lap event and appeared poised to pick up his first ever win at East Bay, but Davenport slid under him with nine laps to go to grab the top spot.  Clanton finished in the runner-up position, with point leader Tim McCreadie coming home in third. Jimmy Owens finished in fourth with Tyler Erb rounding out the top five drivers.
Clanton and Overton had a heated battle for the lead for several laps until Overton slowed on the track after a lap 19 restart that forced Overton from the event. Overton led one lap during the exchange with Clanton as the two fought tooth-and-nail around the 1/3 mile oval.
With Overton out of the race Clanton again showed the way with several drivers nipping at his heels including Owens who moved to second after Overton’s exit. Davenport moved to third and then eventually to second around Owens. Davenport then set his sights on Clanton as has the two crossed the stripe to complete lap 31 Davenport slid down low heading into turn one and slid up in front of Clanton to take the lead.
In Lucas Oil Victory Lane for the 49th time in his career Davenport, the 3-time and reigning series champion was relieved to be back in the winner’s circle for the first time since February. “I didn’t really know where to go in the corners of the track tonight. It was so slick in the center I had to wait a long time to take off, because I didn’t think running the ring around the cushion was the way to take off. Drivers kept piling up behind me. I was just trying to keep the car in the right position. It’s been a struggle the last few weeks.”
“We’ve changed everything on this car except for the driver. I hope everybody that watched at home enjoyed the show. I was just patient at first because the track blew off a lot faster than I thought it would. It was fast through all the heat races, then suddenly when they rolled the top in I don’t know whether the tide rolled back out, but it got drier.”
Clanton had his best finish of 2020 with his runner-up finish. “I started to lose my right front tire there in the shine. I got so tight getting into the corner I was having to dip the car hard. I was doing all I could, then I caught the lapped cars and they were in my line and I needed to turn under him, and I missed the bottom. JD got a good run on me and then Owens got a good run on me as well. I tried to get under both of them on the last restart.”
McCreadie was looking for his third series win of the season and came home third maintaining his point lead heading into Tuesday Night’s action at East Bay. “I just made a big mistake going into one. Brandon [Overton] and I were just racing so hard and that is just the way it goes. I slid him going into turn three.  When I went in there I locked the rear end up and it started clunking in high gear. I thought I was going to spin out in front of the field, which made me lose 3 or 4 spots.”
The winner’s Lance Landers Motorsports Longhorn Chassis is powered by a Cornett Racing Engine and sponsored by Nutrien Ag Solutions, Spartan Mowers, Lucas Oil Products, Penske Racing Shocks, Hoosier Tires, VP Fuels, and ASC Warranty.
Completing the top ten were Brian Shirley, Kyle Bronson, Tanner English, Rick Eckert, and Mason Zeigler.