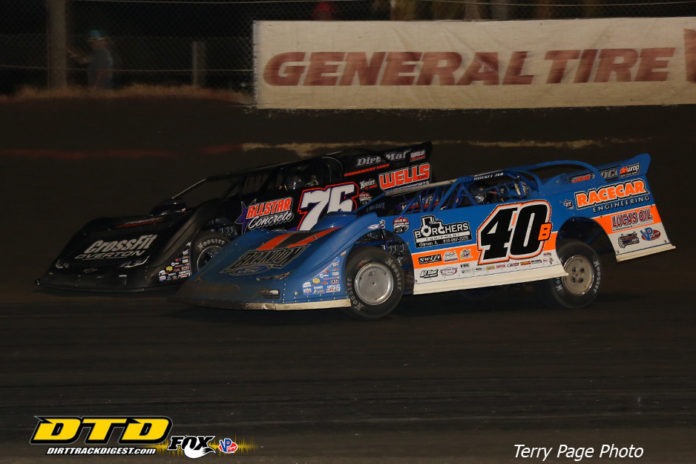 In a thrilling ending to the series’ Reopening Tour, Overton came out of nowhere to edge Erb, denying the Texan [Erb] his first Lucas Oil Late Model Dirt Series win of the season. Mason Zeigler made it a three-car tussle in the closing laps as he finished third after regaining the lead momentarily until Erb got back around him after the two made contact coming out of turn four on the white flag lap.

Zeigler was followed by Jimmy Owens and Devin Moran. Owens was awarded a $5,000 check from Riggs Drilling Solutions as the Tennessee racer topped the Reopening Tour points the last two weeks of racing at Golden Isles and East Bay. The tour resumed its 2020 racing season for the first time since February and is looking forward to welcoming back fans in June.

Erb quickly moved from his third starting spot to take the lead on the opening lap. Erb was then hounded by Zeigler, who started fifth and took the lead away from him on lap six. It would be the only lap that Zeigler would officially lead as Erb regained the top spot a lap later.

Erb then battled through lapped traffic opening up some distance between himself and the second and third-place runners Zeigler and Overton. In the final 15 laps Zeigler and Overton went back-and-forth in the race behind Erb. Zeigler then caught Erb in the final handful of laps but slipped back to third after contact with Erb. Overton then got by Zeigler and caught Erb on the final lap as the two raced to the checkers with Overton barely edging out the Texan at the finish line.

Overton was elated in his third trip to in Lucas Oil Victory Lane in his career at East Bay and his sixth career series win, in what turned out to be a fast and furious race. “When I got into third, I saw Tyler and Mason racing each other so hard. I was trying to bide my time and I figured let them burn their stuff up and maybe I would come back to them,” said the 29-year-old from Evans, Georgia.

“That strategy worked out in our favor, I got to move around a lot when I was behind them. That is what helped me win the race in three and four when I got back under Tyler. That was a heck of a race. My crew busted their tails all week and we have a really good car under us. Thanks to David and Eric Wells for putting me in top notch equipment. I just want to make them proud.”

Erb led 38 of the 40 laps and looked to be in control of the race until the last five laps, as first Zeigler and then Overton made for an exciting finish. “I could hit three and four just right for a long time, but in the last ten laps or so I was just kind of hanging. When Zeigler drove across one and two and I lifted, and I turned underneath him in three and four and he didn’t lift, that kind of got us bottled up. I was trying to get my momentum built up and I saw Brandon got underneath me in two and I beat him into three and four and I couldn’t slow down fast enough like I needed to, and he beat me to the line.”

Zeigler was looking for third career win at East Bay but came home in third. “The car was good, the longer the race went on the better I felt like we were getting. I was just waiting and watching the flags in the last ten laps and just waiting for the right time and I took the lead there and I should have protected my line more, it is what it is. I should have got down a little further. We’ll take a third, so we had a good finish.”