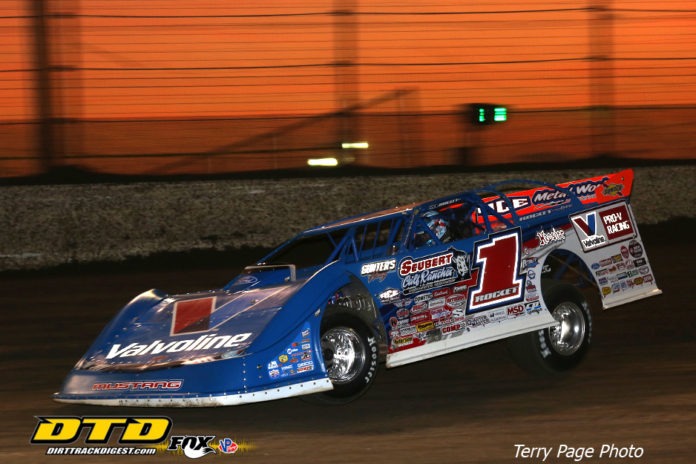 It took one of the closest finishes in World of Outlaws Morton Buildings Late Model Series history to determine a winner on Friday night at Davenport Speedway’s 1/4-mile dirt oval. A race that saw six official lead changes culminated with three passes on the final lap and a finish that dropped jaws worldwide on DIRTVision.

Sheppard crossed Thornton to take the top spot at the white flag. Thornton didn’t back down and railed the Turn 1 cushion to get him back. They touched out of Turn 2. The duo criss-crossed down the backstretch with Thornton rolling the bottom and Sheppard blasting the top into Turn 3. From there, Sheppard and Thornton throttled out of Turn 4 and ran door-to-door to the checkered flag. Ultimately, the difference was only .007 seconds at the stripe.

“When I looked over and saw he was there, I knew it was gonna be really close,” Sheppard, of New Berlin, IL, noted in victory lane. “That last lap was so crazy. I seen him go to the bottom coming to the white, so I shot into the top and noticed it had a little streak of rubber to get by him. Then he passed me back, but he bobbled, and we kind of touched. He went back to the bottom, so I knew I would have to catch top and it gave me just enough of a lunge to get by him.”

Although he fell just short of going back-to-back, Ricky Thornton Jr., of Chandler, AZ, continued to win over the hearts of Dirt Late Model fans across the country. Just one week after banking $20,000 at Jackson Motorplex’s Drydene Double Down Invitational, Thornton continued his stellar streak with the SSI Motorsports No. 20RT Longhorn Chassis. Driving from ninth-to-first, RTJ led nine laps in the closing half and swapped the lead with Sheppard on three occasions in the final quarter-mile. In the end, he was only .007 seconds behind at the line, but nothing could stop the surging driver from smiling with his recent success.

“Man, Brandon and I had a really great race,” Thornton said. “I think we were side-by-side for five or six laps after that restart, it was unreal. I was able to get by him on the top, but when I got to lapped traffic I just screwed up. I thought I would be able to slide Boom [Briggs] there, but it just didn’t quite work out. I got back by him there on the last lap and just put all my faith in the bottom, then we got there for a photo finish. I honestly didn’t know if I won or he won. Hey, we’ll definitely take a second though, that’s a great run for us.”

Sheppard and Thornton were the show in the end, but it was all Bobby Pierce at the beginning of the night. The Oakwood, IL, native and three-time DIRTcar Late Model champion broke the track record in qualifying with a lap of 14.415 seconds, then won his heat race after leading all 10 laps, and kept the perfect night alive by taking the pole position in the Morton Buildings redraw. In pursuit of his first career World of Outlaws Late Model feature win, Pierce paced the opening 11 circuits of the 30-lapper before a daring three-wide affair on lap 12 changed the course of the race.

Catching Pierce with some assistance from lap traffic, Sheppard and Ryan Unzicker of El Paso, IL, took him three wide down the backstretch with Sheppard on bottom, Unzicker in between, and Pierce up top. Sheppard, the two-time and defending World of Outlaws champion came out ahead, snatching the lead away on the bottom side and then driving off into lap traffic leaving Pierce and Unzicker to fight for seconds. However, a caution on Lap 18 brought a new face into play.

Restarting on the outside of row two with 12 laps left, Thornton went screaming around the outside and shocked Sheppard when he rallied around him to take the lead on Lap 19. From there, the duo ran side-by-side, door-to-door, and wheel-to-wheel for a near perfect six laps, unofficially swapping the lead countless times with the race on the line.

“He just did a really great job,” Sheppard explained. “I should’ve went to the top on that restart when I had the lead, but I really didn’t know where to go at that point. I stuck with what was working for me, but he carried so much speed and just drive right around me.”

Once Thornton distanced himself on Lap 26, it actually looked like RTJ had back-to-back W’s coming his way. However, the Rocket1 Racing, Valvoline #1 Rocket XR1 was stalking him in his footsteps and roared back to life at the white flag. Going back to the top, Sheppard maneuvered by Thornton only for the #20RT to go all out on the cushion and sneak back by. Then it all came down to turns three and four when Thornton went low and Sheppard went high. From there, the number .007 seconds tells the rest of the story.

“I can’t thank all of my guys enough — Mark, Dan, Austin, Joel — for sticking behind me,” Sheppard stated after winning for the first time since February. “We’ve definitely been struggling lately, but at the same time our feature stuff has been great still. It just all goes back to qualifying. We got it together tonight and qualified front row of a heat race, that’s what we needed to do get in a position at the front of the feature.”

“I had a blast tonight,” said a happy Thornton. “This is so much fun when you’re in really good equipment like I am here with SSI Motorsports. We kind of made a gamble there with the feature setup, but it paid off. I don’t race late models a whole lot, so this and last week is such a huge confidence boost for me. I really wish we were on the 1/4-mile again tomorrow. I’ve never turned any laps around a 1/2-mile, so it’ll be exciting for sure.”

Behind Sheppard and Thornton at the end was a hard-charging Ricky Weiss. The Headingley, Manitoba native earned his fourth-consecutive top-three finish by driving the Team Drydene #7 Team Zero Race Car from 11th-to-third. Committed to the low line, the Manitoba Missile slowly clawed his way forward before advancing into the top five at halfway. He slightly cut into Sheppard and Thornton’s large lead, but he ran out of time in the end.

“We gotta qualify better,” Weiss said. “The car was really good, I just needed a little more race track. I got to third on the bottom and we were able to keep up with them on the top, which means we’re really good. We’re making strides, I’m pumped about that. This race track was pretty awesome tonight. It was kind of cool to have a front row seat to that show. I didn’t know who won, but I knew it was close.

The ‘Inside Out’ doubleheader presented by Hoker Trucking flips to the big 1/2-mile for Saturday’s World of Outlaws Morton Buildings Late Model Series event. After a thrilling taste of the 1/4-mile bullring tonight, drivers and teams will have to adjust for the high-speed, high-adrenaline 1/2-mile surface for Saturday’s show. With no fans permitted due to local mass gathering restrictions, DIRTVision will have the live coverage for all to watch at home.