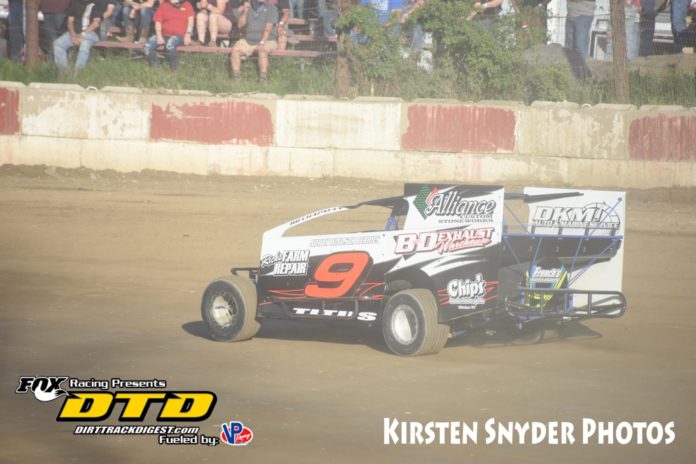 SUSQUEHANNA, PA – Penn Can Speedway management changed up there traditional Friday night show and decided to go green Saturday night at the Susquehanna, Pennsylvania speed plant, feeling that the weather would be more in their favor.

Kenny Titus is sure glad they did as he would capture the American Racer Big Block Main event in a caution plagued feature, that had lady luck on his side. Rolling off in the second starting position, Titus would fall into the 3rd spot when the green was dropped as pole sitter Bryon Worthington led the way. After last week’s heartbreak loss, Joey Grammes jumped into the second position. Unable to get into a rhythm with multiple cautions the leader of Worthington would choose the top lane and would that be the right move the fans were wondering, would it open the door for Grammes.

While in third Titus was holding off last weeks feature winner David Marcuccilli and Mike Trauschold as they were battling for position behind the top two when the caution flew. On the restart the 5J took advantage and shot into the lead but once again caution flew. This time Grammes ventured to the outside lane. But there was no denying this driver as he was on a mission of being the car to beat.

Worthington great run would end as his car would go pit side. Titus running a solid race was now sitting in the bridesmaid position with Trautschold and 2019 Champ of Brian Malcolm and Getz wanting to get into the fun as well. With green laps clicking down, then it happened, the course of the race would change. It was a retake of last week, leader Joey Grammes had command of the race in the later stages only to fall victim to mechanical failure located in the left rear…ironically the same place as well. Bad luck once again struck; Joeys win would have to wait for another week unfortunately for the driver.

As they say one’s misfortune opens the door for another and that’s exactly what came for Kenny Titus in his #9 as he would go on to claim the popular win over a strong field of cars. Rounding out the top five was Mike Trautschold who held off Brian Malcolm. Butch Getz held on to fourth having his hands full with Marcuccilli who had to settle for fifth.


“I’m so happy right now! We had nothing for Grammes but sometimes it’s about being in the right place at the right time. I’m just glad to be in victory lane. Wish we could do it every night! A jubilant Titus stated in victory lane. Heat wins went to Brian Malcolm, Mike Trautschold, Kenny Titus and Alan Rudalavage 29 Modifieds

The Grit 602 Sportsman Series made their way to the “Can” and having 40 cars that would try to make their way in to the $1000.00 to win 40 lap main event. When the dust was settled it was Mike Nagel Jr coming out on top muscling his way to the big pay day. With this win Nagel made it two for two parking in Penn Cans victory lane.

At the drop of the green pole sitter Jimmy Zacharias would lead the way with Fink, Schane, Keniery and Nagel. The feature would see plenty of thrills and spills with plenty of cautions to go with it. Zacharias was looking strong up front but making his way into second was Nagel. Just before the halfway mark under caution the leader went into the pits and would not return.

Mike Nagel Jr would now be shown your leader with Schane, Fink, Collins and Kemery were all dueling to gain a position as the top cars were nose to tail looking for a late race opportunity. But not to be denied as the checkered flag waved it would be the grandson of Dirt Hall of Famer Carl Nagel, Mike that would get the big victory in the Grit 602 Series. Schane, Fink, Collins and Bobby Hackle snuck by Keniery for a top 5 finish.

600cc Modifieds had a strong showing of cars 25 to be exact. It was the #9 of Richie Hitzler besting the field as he held off all challenges as he took advantage of him drawing the pole position and running a smooth consistent race. As Hitzler took the point the high flying 600cc Suzuki motors cars were wound up as the battle behind the leader were 4 wide down the backstretch between Mills, Gray, Davis and Chase.

Caution made for the cars to bunch up for a restart, Jared Green was now in the mix until he went into the pits for the night. Late in the race third place runner spun and fortunately reclined int 7th with no mishap. Dana Davis 2nd place run would come to an end as he pulled onto the infield. Up front not seeing all the action behind him the veteran Ritchie Hitzler would go on to win the action-packed victory.

Street Stock action seen a last lap pass coming out of turn four as the fans were on the edge of their seats as Lance Albanese was your leader when the white flagged dropped but had heavy pressure from Jean Sharpsteen.

Sharpsteen looked on the inside going down the backstretch into the final turn as Albanese opened the door enough were Sharpsteen went. Slight contact was made and they drag raced to the finish with Sharpsteen getting the victory with Sharpsteen having to settle for second. Matt Bowman, Eric Bonham and Travis Brockner in fifth coming from the 20th spot.

The 4cyl division was 41 strong to qualify into the main event. Lucas Mills would be the strongest as he would take the checkers over Andy Bolles, Hammer, Sheldon Whitman and Eric Rowley.

Penn Can Speedway Thanks all their Marketing Sponsors, McDonald, American Racers, Coca Cola in making 2020 a success.

Next Friday night at Penn Can Speedway on June 5th will be the Mike Colsten Memorial race. $5151 to win for the Modified division. 51 laps of action-packed racing. A true gentleman of the sport!