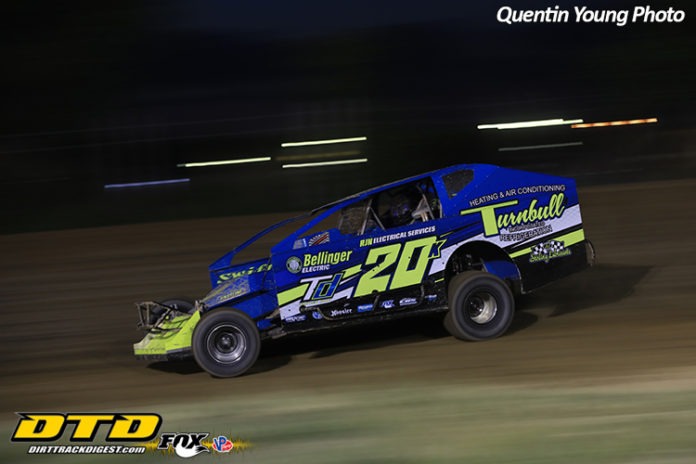 BATAVIA, NY – In his third race behind the wheel of a Troyer Chassis, 4-time and defending track champion Kyle Inman picked up the win in the first DIRTcar sanctioned event for Sportsman since the mid-2000s at the Genesee Speedway Thursday night. The defending Chevy Performance 75 winner during Super DIRT Week started the 25-lap affair in fourth place and took the lead on a third attempt of the opening green flag and never looked back.

“Slideways Sarah J” Sarah Johnson and Garrison Krentz were on the front row for the opening green flag. Johnson would hit the Ute tire with the left front, collapsing the front end and ending her night. After the third attempt to get the feature underway, Kyle Inman used his track knowledge to get around Garrison Krentz to take over the race lead. Once out front, Inman would quickly pull away from the field.

Working through the field was Noah Walker, who would enter the top five at the halfway mark after passing veteran Scott Kerwin. Walker and Kerwin would battle hard for several laps. Tight racing at Genesee is the norm in the DIRTcar Sportsman division and this night was no different. Walker closed the door on Kerwin down the back straightaway and the two made contact in turn four, with Walker spinning to set up a five-lap shootout between Inman and Krentz. Kerwin was sent to the tail of the field for his involvement.

Inman would go on to score the win over Krentz with Dave Conant completing the podium. Phil Vigneri III drove back through the field after being involved in an early race caution finished in fourth with Cameron Tuttle completing the top five.

“We struggled the first couple of races with the Troyer but tonight we were able to make it work” stated Inman. “It was a lot sooner than expected to get a win, but we will take it”. Inman also thanked Bill Colton and Rob Fuller at Troyer Dirt for being a big part to get his Turnbull Heating and Cooling, Bellinger Electric 20k machine going.

“It was weird without fans tonight”, Inman added. “We’re glad that the race was streamed on DirtTrackDigest.tv so the fans could still watch it at home.”

Second place finisher Garrison Krentz was proud to finish in second. “I normally do not run well here so to get a second is a win in our book”, Krentz said.

A total of 92 racecars signed in for the first race of the season at the historic Genesee County Fairgrounds, with 22 DIRTcar Sportsman taking the green flag.