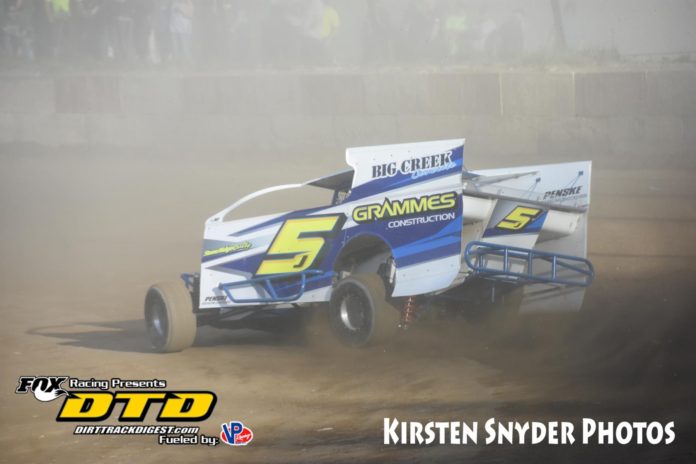 SUSQUEHANNA, PA – One of Penn Can’s most popular drivers, Joey Grammes, strives to bring racing alive for the younger generations. In victory lane, he makes time for any youngster to get a picture with him and the car with last night being no exception. As I walked to the concession, I heard a young boy tell his dad they had to hurry up. The reason was he found out Grammes had won and had to get to victory lane for his picture.

June 19th would be no surprise to see the potent Getz owned #5j in victory lane. After having a disappointing finish last week, Grammes looked to rebound. The front row of Mike Loney and Ken Titus brought 22 mighty modifieds to the green. After a shaky start, the racing was the best of the year.

Grammes went to the front on lap 2 with Loney on his rear bumper. The feature would then go green till the checkered. Loney stayed within striking distance even putting the nose of the car low. Grammes just throws the car hard to beat Loney coming out of the corners. During the battle up front, a hard charging Byron Worthing had the #63 working the track from his ninth place starting spot.

By lap 25, two lapped cars would have the front runners jockeying for position. Loney would lose a spot to Worthing as he backed out coming out of turn two and held on for a sixth place finish with a tire going down. Worthing put it all out there to try and reel in Grammes but to no avail. Marshall Hurd had his best finish of the year with a third place finish with Butch Getz and Ken Titus rounding out the top five.

Mike Schane returned to victory lane for the first time in 2020. The 2019 champion had a rough start of the year. His run last night was a repeat of the 2019 season. A two caution race had Tommy Oleski and Jimmy Zacharias zeroed in on Schane for the 25 lap feature. Schane would take the right lanes thru lap traffic and return to victory lane.

Travis Brockner went to victory lane for the first time in his career with a win in the street stock division. What made the win that much more intense was the fact he held off one of the most competitive drivers for a crazy five lap shootout. Tyler Yeagle had the #33 door to door with Brockner for the last three laps of nerve racking back and forth after a late race restart.

Tommy Groover and Nate Hill had the crowd on their feet with the slide jobs and cross over for the last ten laps of their twenty lap feature. The 4 cylinders gave as much excitement to the fans with Nick Kennedy holding off David Fox jr. and Mike Ferris.

The 600cc modifieds had a rough start to their 20 lap feature. Cautions would plagued the start of the race. Dana Davis would return to victory lane with a convincing run. Zach Mills and Jacob Waibel rounded out the top three.

Kyle Pierce found the top to be in the wingless sprint feature with Johnny Smith running the extreme outside. The always exciting sprints didn’t disappoint with Pierce and Smith dueling hard for the 15 lap feature.
Trevor Houghton held of hard chargers Josh Landers, Liam Jackson and Tyler Holcomb to take the win in the Junior division.

On hand for the nights activities was the founder of the Spalding Foundation. Betty Sherwood and her team raise funds to help any driver who has suffered an injury while racing. You can hear the check being written before you are off the phone with her and is always available at the drop of the hat. Penn Can wanted to thank the Spalding Foundation with a basket drive to raise money. We can proudly say that $3000 was raised and given directly to the foundation before the last checkered flag was dropped. We would like to thank everyone involved in helping us support such a good cause.

The Fireworks Extravaganza sponsored by Monteforte Fireworks scheduled for July 3rd will be the biggest show to date. We will have a surprise to start the show and then hold onto your hats has the Penn Can team will light up the sky. On that night, $1 of every paid general admission will benefit the Oakland Borough Food Bank that supplies all of Susquehanna County. Penn Can Speedway will match the amount raised to double the donation for much needed relief to the surrounding communities.