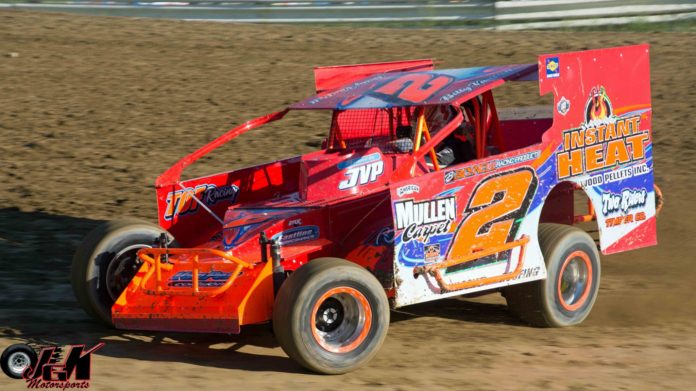 WOODHULL, NY – If you were amongst the race teams at the Woodhull Raceway, you would have saw a packed pit area at the high banks for Lamb and Webster night. Earlier in the week, Terry and Nikki Brewer decided to bring back the older nightly schedule with Insinger Performance Modifieds coming out first and ending the night with the Big Jim’s Wicked Tees Woodhull Warriors.

So first out of the gate as mentioned was the Insinger Performance Modifieds with 20 cars. Joe Dgien, Mike Bills, and Donnie Lawson took home heat race wins. Nearly all cars started the feature event minus Dayton Brewer who had a broken race car after a heat race collision. Ryan Tracy and Billy Van Pelt led the field to green. However it was Van Pelt who would take the lead off the first set of corners, Morseman, Tracy, and Lawson battled hard for third. Just after clicking off the first lap, the yellow lights ignited for a pileup in turn 3 including Cory Costa, Brayden Bills, Sheldon Gardner amongst others. Morseman running third, had a flat tire and would go to get it changed during the yellow.

Back on the ensuing restart, Lawson would continue his battle with Tracy and end up getting the spot at the line. Potrzebowski also made his way by Tracy and actually got by Lawson for 2nd but the caution would put Potrzebowski back to 3rd. Battling up through the field all race long was Josh Nobriga, Cory Costa, Ron Cartwright Jr, and Joe Dgien as they were working towards a top ten position. Later on, Dgien entered the top 5 and was battling with Josh Keesey for 4th when he spun in turn 4 to draw the yellow. In final laps, it looked to be a great chance for Donnie Lawson. Lawson was right on the back bumper of Van Pelt on the final lap but it would be Van Pelt first to the line and go back to back at Woodhull.

The Cummings Trucking RUSH Late Models had a 15 car star filled field with the likes of Waters brothers and the Knowles brothers. Winning heat races was Dustin Waters and Jason Knowles. Off the start, John Waters would take the lead with the Knowles brothers hot on his trail. Those three would pull away from the rest of the field. Brian Knowles could rotate his car a bit more than Waters could and nearly passed Waters a half dozen times but Waters held on to the lead. John Haggerty worked his way up through the field as well and was pulling away from Joe Moyer for 4th. In the closing stages, Waters would pull away to beat the Knowles brothers for his first win in 2020 on the High Banks.

NAPA Crate Sportsmans once again had a great showing with 26 cars ready to race. Dale Welty, Ajay Potrzebowski, and Kenny Peoples Jr won heat race events with Connor Brown winning the consolation race to transfer to the feature event. Ted Morseman led the field to the green with Crater Crooker alongside. In turn 1, Crooker and Grice had a tight race with neither coming away with 2nd place off the turn. Dale Welty and Kreg Crooker sneaked by for 2nd and 3rd. The first yellow would come early but in a few moments the field roared back to life. Kreg Crooker worked the high side of Welty and took over 2nd on lap 2. Crooker then gained a lot of momentum and worked the top side of Morseman for the race lead but it was to no avail. Meanwhile defending track champion Kenny Peoples Jr tried to make a run off the top to get by Welty but the bottom lane was too strong. Ajay Potrzebowski and Dylan Cecce worked their way through the field around AJ Costley and Carter Crooker to try and make a bid for the top positions. However the bottom lane prevailed and Ted Morseman picked up the win with Kreg Crooker in 2nd, Dale Welty 3rd, Kenny Peoples Jr 4th, and Ajay Potrzebowski 5th.

Another great group of cars entered the speedway, the Woodhull Auto Supply Hobby Stocks held a field of 20 cars. In heat racing action it would be Les Smith, Bill Williams, Jeredd Dennis taking checkered flags. In their 20 lap feature, Scott Brown would be the guy to pick up where he left off last week. Brown would lead early but a hard charging AJ Neidermaier, Jeredd Dennis, Mike Spencer, and Bill Williams were in close proximity. Half way through the feature is when things heated up for the race lead. Brown, Neidermaier, and Dennis three wide for the lead. Dennis ran the top, edged ahead for 2nd on lap 10. However Brown kept the momentum on the bottom to keep 2nd place. Yellow flag waved on lap 13 to slow the field but it never calmed the battle for the lead. On the restart, Dennis went back to the top and gained momentum on the top. Scott Brown slipped up and that allowed Jeredd Dennis to get by for 2nd with 3 laps to go. With the white flag in the air, Dennis has the momentum on the top, and Neidermaier has a fast consistent line on the bottom. At the line, Jeredd Dennis gets the win by .130 seconds over Neidermaier and Brown in one of the best features for the Hobby Stocks on the High Banks.

The Joe Willcox Performance Automatics Street Stocks rolled into the High Banks with 14 cars. Kurt Stebbins and Glenn Whritenour picked up heat race wins. Both of them started on the front row for the 20 feature event. Stebbins would pull ahead of Whritenour and assume the race lead. It wouldn’t be very many laps and Whritenour would battle with Stebbins on the bottom and eventually take the lead at the half way mark. Meanwhile drivers like Brett Crawford, Branden Morseman, Dan Gardner, and Brett Marlatt were making their presence known making their way through the field. While running solidly in second place, Stebbins motor was failing. Stebbins fell through the field, he would finish but would be the last car across the line. At the checkered flag, Whritenour would capture the back to back win over Brett Crawford, Branden Morseman, Dan Gardner, and Brett Marlatt.

The Big Jim’s Wicked Tees Mini Stocks arrived with 14 cars. Ray Hyer and Travis Webster started out the night with heat race wins but in their 20 lap feature, Travis Webster was setting the pace as he pulled away early. Jason Ketrow, Josh Webster, and Ray Hyer battled for second during a majority of the race. However a late race caution changed everything. Jason Ketrow took to the bottom on a lap 18 restart and pulled a slide job on Travis Webster in turns 1 and 2 to take the race lead. Travis Webster tried to regain the lead but would spin on the exit of turn 4 collecting Ray Hyer and others. On the final restart, Ketrow would hold back Josh Webster to get a back to back victory. Webster finish 2nd, Brody Amidon 3rd, Jason Warner 4th, and Scott Lehman 5th.

Johnson’s Auto Supply Front Wheel Drives had a field of 10 cars which would see racing in one heat. Codie Baker would pick up the heat win and start on the pole alongside Scott Lehman Jr. These two would put on a battle for the ages. A classic top and bottom battle. Baker on the bottom and Lehman Jr on top. Baker would lead the first lap but Lehman would take command using the top lane. Soon after, Baker adjusted his line from the bottom to the middle which made him turn the fastest laps of the race. Baker would take the lead back on lap 8 and never look back. Nate Freeland and Matt Prescott would battle for 3rd and 4th with Freeland holding third in the late stages and Garrett Wilson came closer to a battle with Prescott in the final laps but that battle for 4th would never materialize.

Big Jim’s Wicked Tees Woodhull Warriors would finish out the night with 8 cars in the pit area. Jacob Tubbs would take the heat race win and start on the pole for the 10 lap feature event alongside Levi Riley. Off the green flag, Tubbs would grab the early lead with Riley, and Ethan Decker in close tow. The first caution would fall after lap 1 was scored for Marshall O’Brien spun off of turn 4. During this caution Levi Riley came to a stop on the front stretch and would not return to the track. On the next restart, Decker did not get the restart he needed so that allowed Jordan Costley to make a bid for a podium spot. Marshall O’Brien worked his way up through the field as well but Decker held down the 2nd spot. In the end it was Jacob Tubbs getting back to back wins, Ethan Decker finished 2nd, Marshall O’Brien 3rd, Jordan Costley 4th, and Bradley Morseman 5th.

Next week Woodhull Raceway will once again have a complete show presented by Instant Heat Wood Pellets with NO fireworks show until August.