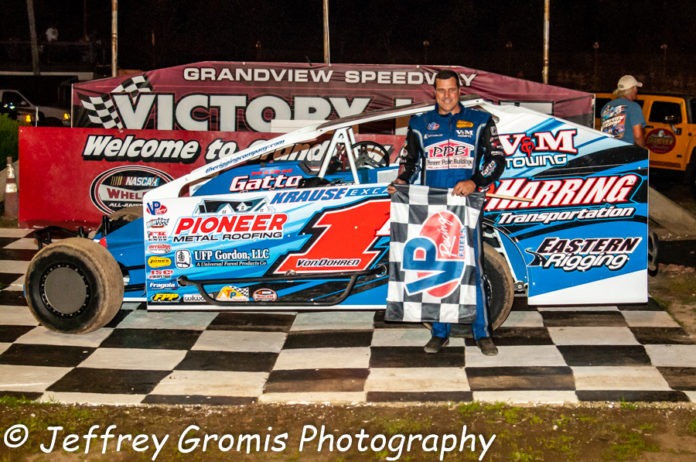 BECHTELSVILLE, PA – Despite rain being all around the area of the 1/3-mile Grandview Speedway clay oval, action was never interrupted as the first championship point events were run off.

Craig Von Dohren, who started deep in the pack in last Saturday’s opening night activities, had a better starting spot for the first point race of the season and it worked to his advantage in the 30-lap T.P. Trailers NASCAR Advanced Auto Parts Modified feature on Saturday night. By winning the first qualifying heat and a heads up start Von Dohren was the polesitter. Numerous competitors tried to take the lead away from the ten-time point champion on various occasions, but were unsuccessful. At the drop of the checkered Von Dohren pulled the PPB sponsored No. 1C into victory lane to begin the quest towards a possible eleventh title.

The 25-lap T.P. Truck Equipment NASCAR Sportsman feature was a nip and tuck battle between winner Jack Butler and runner-up Brandon Edgar. Both drivers dueled side-by-side for several laps with neither one giving up as Butler went on to take the checkered.

Providing the feature winners met the necessary requirements, they received monetary awards from T.P. Trailers and a certificate from VP Fuels for product awards. The Dan’s Deli ½-way hoagie award recipients were Von Dohren and Butler.


At the wave of the green in the Modified feature by starter Ray Kemp, Von Dohren was on a mission trailed by Jared Umbenhauer, Ryan Higgs, Briggs Danner and Brett Kressley. Kressley was in second at the end of eight laps and in pursuit of Von Dohren. Mark Kratz stopped along the homestretch for the first caution on the ninth lap. On the restart with Von Dohren and Kressley door handle to door handle, contact was made as Von Dohren didn’t “realize” Kressley was so close to him heading out of the fourth turn heading into turn one. Kressley lost valuable positions as Von Dohren was still the leader. Battling for second through fifth were Umbenhauer, Doug Manmiller, Duane Howard and Jeff Strunk. Manmiller took over second on the 14th lap and took chase after Von Dohren, who was approaching lapped traffic by the 18th circuit. The final caution was on the 21st lap when Mike Lisowski’s car erupted with steam bellowing out of it in the four turn. Von Dohren held his spot with Manmiller in a challenging position trailed by defending point champion Howard, Strunk and Umbenhauer. With six laps to go Howard overtook second and set his sights on Von Dohren. No one was able to catch and pass Von Dohren as he pulled into the winner’s circle for his first triumph of the season. Finishing second was Howard followed by Manmiller, Strunk and Umbenhauer. Rounding out the top ten were Ryan Grim, Kressley, John Willman, Kyle Weiss and Louden Reimert.

Brandon Edgar led four laps of the Sportsman feature before the yellow came out for a fourth turn tangle between Derrick Smith and Kyle Lilick. On the restart Butler charged into first coming off the fourth turn to become the new leader. Edgar didn’t give him any room to falter and he stuck right with Butler trying to regain control. While Butler stuck to the inside groove and Edgar on the outside jockeyed for first, Brian Hirthler and defending point champion Brad Brightbill had their own battle for third. Edgar made several runs at Butler in an attempt to regain control, but each one failed. Butler never lost the lead and went on the score his first victory of the year and his third career win. Finishing a close second was Edgar followed by Brightbill, Hirthler and Mark Kemmerer. Sixth through tenth were Brett Gilmore, Jesse Landis, Ryan Beltz, Kyle Lilick and Chris Esposito. Edgar, Butler, Nate Brinker and Hirthler were the heat winners. Consies went to Brad Arnold and Kenny Bock.

Saturday, July 4, the Sportsman will be the highlight of the night with the Firecracker 40-lap feature rewarding the winner with $2,000 along with a full show of Modifieds set to get underway at 7:30 p.m.