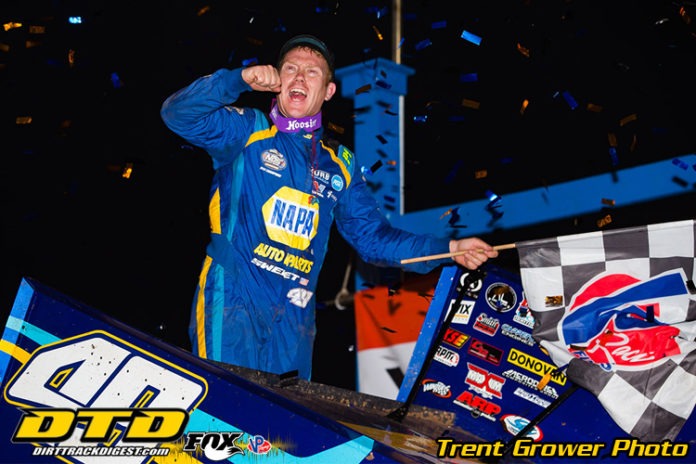 NEW RICHMOND, WI – Confidence can be a superpower.

Like Superman having to fight his way through a rolodex of foes to save Lois Lane, Sweet powered his way by six competitors in under 35 laps to claim his sixth win of 2020. He also pocketed the $20,000 top prize – the second biggest winner’s purse of the year.

“Obviously, we have a lot of confidence right now, but we also have a lot of confidence at this racetrack,” said Sweet, of Grass Valley, CA. “I’ve ran really well here for three or four straight years now. There’s something about my driving style, the grip level, whatever. Figured we dug ourselves a little hole in qualifying. So, it’s really neat to be able to go 16th quick (in qualifying), sixth to third in the Heat and then seventh to winning the Feature. It shows we never give up and have good race cars right now.”

The victory is his second consecutive win at the 3/8-mile track. His previous win at the track last year showed he and his Kasey Kahne Racing team were championship caliber. After a part failure in the first of two Features in a day, the KKR team got a back-up car ready in less than an hour and went on to win the second Feature.

This year, during the Independence Day Spectacular weekend, they continue to emphasize that they’re in championship form once again.

For the second day in a row, participants and the large crowd of fans entered the facility by first going through a state-of-the-art COVID-19 screening process. With Qualifying already completed on Thursday, the night’s program stated with three Drydene Heat Races.

Sweet missed out on making the DIRTVision Fast Pass Dash by finishing third in his Heat but later proved that wasn’t a hinderance.

Kyle Larson Racing driver Carson Macedo positioned himself early as the driver to beat. He won the DIRTVision Fast Pass Dash and pulled away to about a two second lead in the first few laps of the Feature.

Logan Schuchart, who won his first Jackson Nationals title last weekend, moved past Ian Madsen for second in the opening laps and then caught Macedo in traffic a few laps later. They battled side by side for several laps, with Macedo up top and Schuchart low. The Drydene #1S would dive under Macedo into the corner, but the Tarlton & Son #2 had the better momentum off the turns up top.

Schuchart eventually found an opening to the outside of Macedo and officially passed him for the lead on Lap 14. Macedo was determined to get his second win of the season and drove back by Schuchart the next lap.

While the two battled, Sweet closed in. Once Schuchart’s charge at Macedo faded, “The Big Cat” worked his way by the Shark Racing car and began his hunt of Macedo.

Looking like Superman at full speed, Sweet bolted underneath Macedo going into Turn 1 with 13 laps to go and grabbed the lead. From then on, he ran his NAPA Auto Parts #49 car to its redline. Not only because he wanted another win, but “The Mad Man” Kerry Madsen was on the move behind him. He worked his way past Macedo for second in the closing laps and cut a tenth of a second out of Sweet’s lead every lap.

However, time was on Sweet’s side. Before Madsen could get in a rhythm to dwindle down Sweet’s two second lead, the checkered flag waved over the blue KKR machine.

“These NAPA Auto Parts guys give me a great car night in and night out,” Sweet said in Victory Lane. “It honestly doesn’t matter what track we’re at right now. They’re working hard and it’s paying off. We’re running a little hot here, but we gave it our all.

“It was a fast 15 (final) laps there and I could see the leaders. I was thinking we were going to get a caution but never did. I had to get up on the wheel and make it happen. Got to the lead and tried to run the hardest possible pace I could. I saw Kerry (Madsen) got to second. I know he rips around this place. It was a great race. So happy to be in front of a full crowd here tonight. Thank you so much for coming out.

Madsen – a three-time winner at the track – said it took him a while to find his rhythm around the bottom. Once he did, he started picking off cars but ultimately had to settle for a runner-up finish – his best finish of the season, so far.

For Macedo, who finished third, the race was another learning curve. He’ll be spending the night on DIRTVision, watching the race and seeing where he can improve.

“I’ll go back and look at the video to see what I can do better so we can start winning these World of Outlaws races more consistently,” said Macedo, the 2019 Rookie of the Year. “Now that DIRTVision has the Exclusive page where the race is posted moments after the race is over, we go back there and watch the those and see how our race car was and dissect what I do as a driver. In order to win these World of Outlaws race you have to be mistake free 100 percent.”

Sweet’s confidence filled, and mistake free, night helped him extent his points lead over second-place to 82 points. Schuchart has moved into that runner-up spot over 10-time Series champion Donny Schatz, who is now third. Schuchart finished fifth and Schatz ended the night 11th.

DOBMEIER TRANSPORTED: Racing for a transfer position in a Heat Race Friday night at Cedar Lake Speedway, Mark Dobmeier was involved in a crash. He was awake and alert when transported to St. Paul Hospital for further evaluation.

The World of Outlaws NOS Energy Drink Sprint Car Series returns to Cedar Lake Speedway on Saturday, July 4 for the final night of the Independence Day Spectacular with another $20,000-to-win on the line.