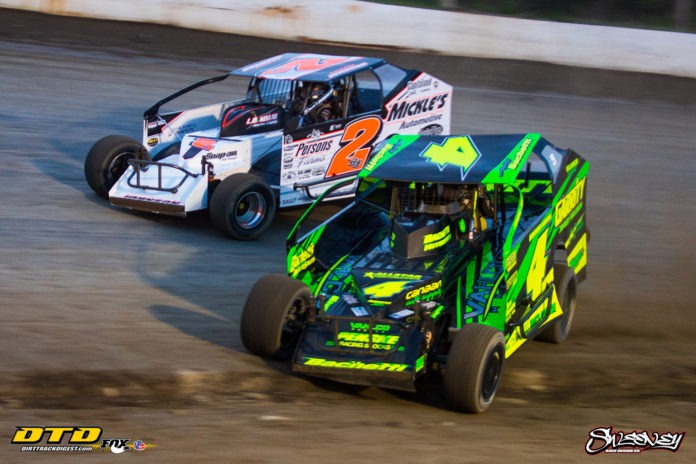 WEST LEBANON, NY – Andy Bachetti picked up two feature wins in one night on Saturday night at the Lebanon Valley Speedway as he picked up the win in both Small Block and Big Block competition.

Bachetti started the feature in the 4th position but was unable to make any ground prior to a yellow flag falling on lap 4 as a car had spun in turn 2.   When the green flag flew again Bachetti was able to come forward, moving into second position past Olden Dwyer on lap 8.

Taking full advantage of a lap 14 restart, Bachetti pointed his number 4 machine underneath the 25 of Frank Harper heading into turn 1 and was able to complete the pass by the time the two cars had reached turn 3.  From there, Bachetti set sail and wasn’t challenged again.

“I just lucked into this one to be honest with you.  The car was a little off tonight but we kept digging” said a humble Bachetti in victory lane.

In the Big Block feature Bachetti had a lot more work to do, after starting in the 15th starting spot and nearly getting caught up in lap 2 jingle that collected both Kenny Tremont Jr and Peter Britten.

By the midway point of the Big Block Modified feature Keith Flach had built up a nearly insurmountable 5 second lead, and while Ronnie Johnson and Andy Bachetti battled for the runner up spot.  Bachetti, using the same lane he did in the 358 division made the move low on Johnson to take 2nd on lap 18.

With the leader Flach in lapped traffic with only 11 laps to go, Bachetti would need a yellow flag to close the gap.  That yellow flag came for a slowing Brett Haas machine on lap 26.  When the green flag flew, Flach jumped out to the lead, with Bachetti in tow.  When they hit turn 3, Bachetti threw a massive slider, taking the lead away from the Flach 43 machine.  Keith tried to return the favor in turns 1 and 2 but just couldn’t complete the pass.

From there, Bachetti set sail in route to his 2nd victory of the night.  Keith Flach finished in second, with Ronnie Johnson, Kenny Tremont and Marc Johnson rounding out the top five.

“I’ve got to thank this team, they put a good car under me” said Bachetti in victory lane.  He went on to dedicate the win to his father, who wasn’t able to be at the track with him “I can’t say enough about Mike Garrity.  This one is for my father, he’s in the hospital right now.  He’s working hard to get back with us and its gonna be good.”