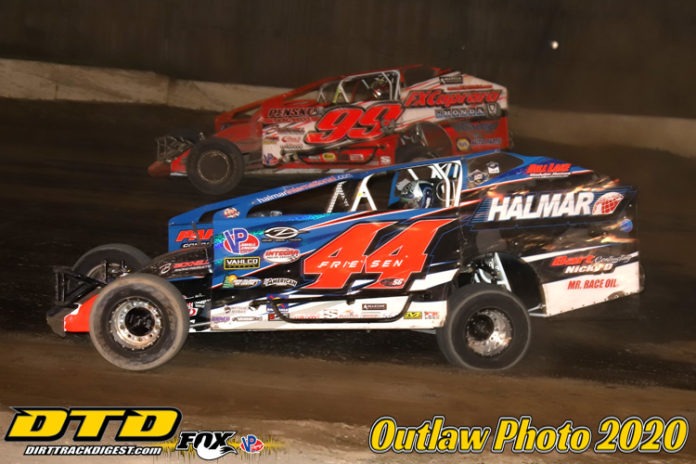 FONDA, NY –  Stewart Friesen continued his dominance on Saturday night at the Track of Champions, picking up the win in the $4,000 to win Red, White and Blue special.  So far this season, Friesen has won every single event he’s entered at Fonda.

Roger Henion Jr and Craig Hanson led the field to Joe Kriss’ green flag, with Hanson jumping out to the early lead.  By lap 6 Rocky Warner, Larry Wight, Stewart Friesen and Matt Delorenzo were all stalking the top five after starting mid pack.

Warner, Wight and Friesen battled side by side for multiple laps as the track seemed to be even on both the top and bottom side.  Friesen made his way by the 1J of Warner on lap 7 and set his sights on the 99L of Wight.

Wight, who was in attendance to prep for Sunday’s Firecracker 50 was having to work extra hard to get by the Henion machine when Friesen got a big run off of turn 4 and carried his momentum down into the first turn.  Friesen was able to hold the low line through turns 1 and 2 and completed the pass for 5th on Wight by lap 12.

From there, the 44 machine set sail, taking 4th from David Schilling in turn 3 and 4 on the same lap.

The yellow flag would fall on lap 14 as Matt Delorenzo slowed to stop in turn 2.  That yellow flag was exactly what Friesen needed as it quickly evaporated the lead that both Craig Hanson and Adam McAuliffe had built up.

When the green flag fell again Friesen quickly dispatched of the third place running Josh Hohenforst and set his sights on the leaders.  Using the extreme bottom of turns 3 and 4 Friesen was able to get by both McAuliffe and Hanson on consecutive laps to take the lead by lap 16.

With Stewart now firmly out front, all eyed turned to the other Friesen in the field, Jessica.  Starting in the 10 spot, Jess had methodically worked her way into the top 5 and was pressuring the 20c of Hanson for 4th on lap 21.

The field would slow one final time, on lap 27 for the 33 of Rich Christman who blew a right rear tire and came to a stop in turn 4.  This would give Larry Wight one final shot to get by Friesen, but Stew was up to the challenge and easily pulled away to claim the victory on Saturday night.

“The car was good today, hot temps and a slippery surface.  The track was good, we could race all over it.  It was great, nice to see some fans back in the stands here.  We appreciate the support” said Friesen in victory lane.

With Jessica having a strong 3rd place run, Stewart was asked about a possible 1-2 Friesen family finish “I was hoping, when we started on the outside row and they watered the top she was kind of guarded a little bit and I went up under the caution and I pointed up to tell her to get up on the top and beat on it because there is some good grip up there.  I was able to slip by and then the bottom came back there towards the end and that is right in her wheelhouse”