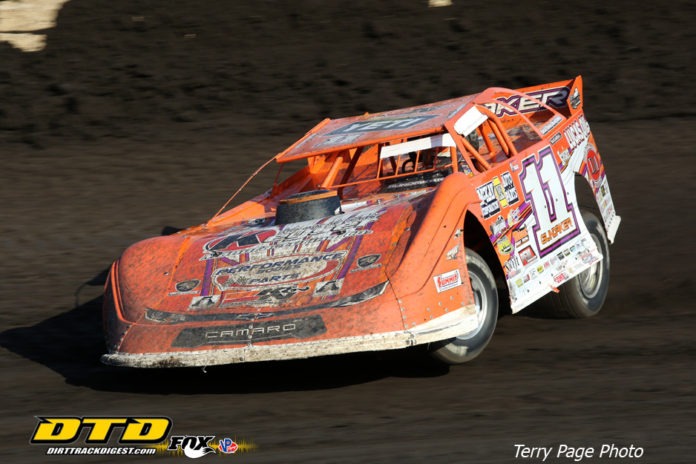 FAIRBURY, IL – In one of the most exciting runs to the front seen all year in a DIRTcar Late Model, Gordy Gundaker dazzled the crowd Saturday night at Fairbury Speedway, coming all the way from 14th to score his fourth career Summer Nationals victory.

Defending tour champion Brian Shirley jetted out to a commanding lead in the early going, but company was coming fast behind him. Shannon Babb found the fast groove right through the middle and had taken second by Lap 13.

A caution on Lap 32 re-stacked the field and gave Babb the shot he needed to grab the lead, which he did, hammering the cushion in Turns 3-4 to Shirley’s outside.

By this time, Gundaker had just made the pass for sixth. With one of the smoothest lines of anyone on the very bottom of the track, G-Man advanced to fourth on Lap 40, third on Lap 42, second on Lap 44 and finally underneath Babb for the lead on Lap 46.

From seemingly out of nowhere, Gundaker had shocked the field and picked up the $10,000 payday from his 14th starting spot.


“We were so good, I was just kinda biding my time,” a pumped-up Gundaker said in Victory Lane. “I know last year, I felt like we gave this race away. We just got rolling and the yellow came out at a perfect time. It was awesome!”

Punctuated by an epic display of fence-climbing after his backwards parade lap around the track, the St. Charles, MO-pilot soon arrived in FALS Victory Lane to a sea of applause and gave this memorable quote to his fans and those watching on DIRTVision presented by Drydene.

“You fans are badass, I love every single one of you! Let’s party, let’s drink beer, we won, baby!”

Pennsylvanian Rick Eckert climbed from ninth to finish second – his second consecutive podium finish after a third-place result on Friday night. Shannon Babb was able to hold on for third while Shirley and Ryan Unzicker rounded out the top-five.

The DIRTcar Summer Nationals action continues Sunday night with Round #5 from The Bullring at RICO Fairgrounds in East Moline, IL. Tune into DIRTVision presented by Drydene to watch all the action.

Just when the Fairbury Speedway fans thought there wasn’t a way to top the excitement in the DIRTcar Late Model Feature they had just seen, the DIRTcar Summit Racing Equipment Modifieds found a way to do exactly that.

Mike McKinney and Allen Weisser battled side-by-side for nearly every one of the 30 Feature laps Saturday night, putting on an exciting display of hard racing in the closing laps that ended with contact between the two out of Turn 4 and McKinney in Victory Lane for the second time in three races.

Weisser, of Peoria, IL, led the opening circuits using the bottom lane of the smooth Fairbury racing surface, while McKinney, of Plainfield, IL, rode the top side momentum to the lead on Lap 3. As the two dug into lapped traffic, the door opened back up for Weisser to slide by on the bottom as McKinney was pinned behind slower cars on Lap 12.

The battle raged on in lapped traffic as the laps wound down to just two to-go. McKinney threw a first slider for the lead in Turns 1-2, Weisser countered down low to deny him but McKinney did it again in Turns 3-4 and made it stick. He saw the white flag and charged into Turn 1 with a full head of steam, throwing it up top once more as Weisser crept down low.

McKinney moved down to the middle groove into Turn 3 and Weisser slid up towards him as they made contact coming out of Turn 4, banging wheels down the front stretch. Weisser’s momentum was slowed by the contact as McKinney bounced off the outside wall, giving him the boost he needed to cross the stripe ahead of Weisser by just .76 seconds.