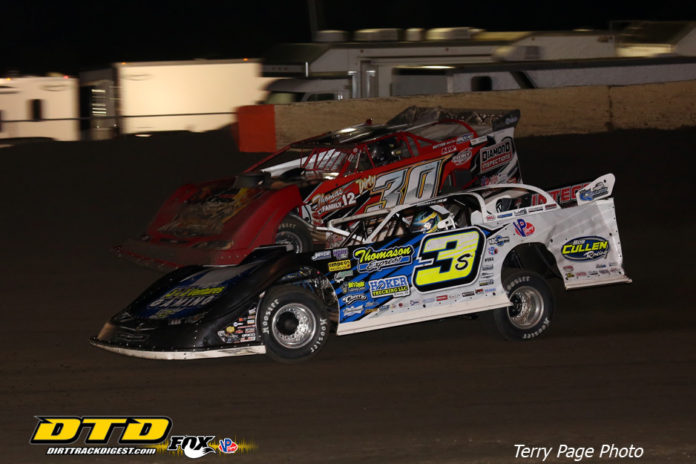 FARMER CITY, IL – The win may have slipped away from him one night ago, but on Friday night at Farmer City Raceway, there was no way Brian Shirley was going to be denied again.

The three-time and defending DIRTcar Summer Nationals champion found the pole for the 50-lap Feature and wasted no time, jetting out to a commanding lead inside the first 10 laps with Bobby Pierce following.

Pierce’s bad luck from Thursday night seemed to carry over, as he brought out the caution soon after, heading to the work area with a flat tire. He was able to rebound, however, coming back up through the field to finish 8th.

This opened the door for Shannon Babb to challenge Shirley out front, which he did for much of the next 20 laps through lapped traffic. At one point, the gap between them was just .168 seconds.

But in the end, Shirley was able to pull away from Babb and the rest of the field as the lapped traffic thinned out, taking the checkered flag untouched and notching his first Hell Tour victory of 2020 and his first at the Farmer City Raceway in Summer Nationals competition.


In Victory Lane, Shirley gave it up to his sponsors, his dedicated crew and especially his car owners Bob and Lisa Cullen for their efforts in keeping the operation alive in the middle of a pandemic-marred racing season.

“We went into a hole, just as far as keeping everything with the race team going,” Shirley said. “Bob and Lisa – they’ve had to step it up and take it out of their pockets, and that’s tough… they’ve given me the opportunity to come back out here and do what I do.”

Babb crossed the line in second while Frank Heckenast Jr. rounded out the podium after a great bounce-back run from his misfortune earlier in the week. Taylor Scheffler crossed the finish line in fourth but was declared six pounds light at the scales and was disqualified as a result, moving Jason Feger and Ryan Unzicker up into the top-five.

Highland Speedway in Highland, IL, is the next stop for the DIRTcar Summer Nationals on Saturday, July 18. Don’t miss a moment of the action – get a DIRTVision Fast Pass subscription today and watch the Summer Nationals Late Models all season long.

The Magic Man tracked-down and passed the two-time and defending Summit Modified champion Nick Hoffman in the closing laps to score his third tour victory of 2020 Friday night and his fourth in-a-row on Friday nights at Farmer City.

After a caution-filled start, Hoffman jumped out to the lead as McKinney fought-off challengers to retain his spot inside the top-five. Once he cleared the rest of the leaders in the early going, McKinney set his sights on the Elite Chassis builder.

McKinney kept digging in all three lanes to get around Hoffman but could not seem to find the momentum. That was, until he made all the momentum he needed with a big slide job in Turns 3-4 with five laps remaining to grab the lead – one he would not relinquish as he held off Hoffman and crossed the stripe for the $1,500 victory.

“Man, I’m out of breath,” McKinney told Announcer Ruben Mireles in Victory Lane. “I don’t know if we were that good or not, it was just another case where I wanted to win this deal really bad. There’s nobody in the pit area I want to beat more than my best buddy Nick. Just had to get up on the damn wheel and get it done.”