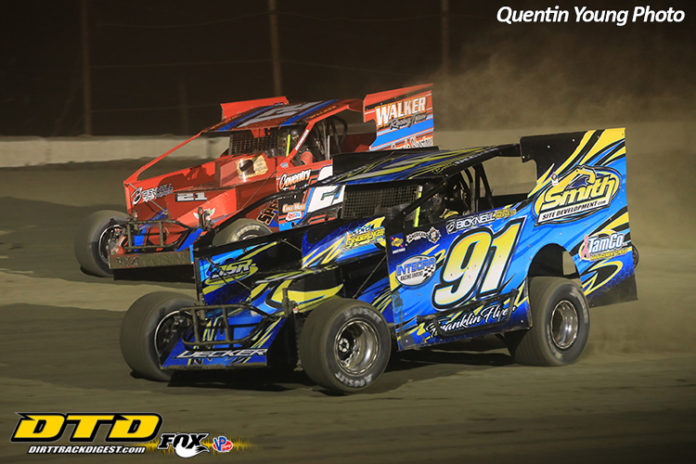 CENTER LISLE, NY – After Mother Nature got involved with the July 11th show, she rewarded the Thunder Mountain Speedway with a hot and clear summer day to go racing with on July 18th. All eight of the track’s regular divisions were in action and they provided a variety of racing excitement all night long.

The Open Modified feature started off with a great fight for the lead between John Morse and Marc Goodwin. Goodwin would win that battle and led for a while, but he was faced with a new challenge in Billy Decker shortly after. Decker went to the outside lane to grab the race lead away from Goodwin and started to pull away from the field. While he was leading the race, points leader Shaun Walker made his way up to 2nd place. A few late race cautions gave Walker the opportunity to steal the lead from Decker, but Decker was able to hold off all charges from Walker and picked up his second win of the season.

One of the most exciting feature races of the night was from the DIRTcar 358 Modifieds. Darren Smith led the race early from the outside pole position until Jeff Taylor ran him down and took over the top spot. Shortly after Taylor moved into the lead, Ronnie Davis III began knocking on the door. Davis was trying to make an outside move around Taylor, but was impacted by lapped traffic on multiple occasions. His resiliency eventually paid off and was able to complete the pass on Taylor once he found some room to work with. It was smooth sailing from that point on and RD3 took the checkered flag for the second time this season.

The 25 lap DIRTcar Sportsman feature was also among one of the most exciting races of the night. Outside pole sitter Matt Meade jumped into the lead off the start and was determined to lead the whole way. The race started off slowly with a few cautions, but eventually got a green flag run in the middle of the race. Meade was the man to beat all race long, but a late race caution with four laps to go forced him to truly earn the win he was chasing as a hard charging Tommy Collins moved his way up to 2nd before the caution flew. Collins made multiple attempts to sneak underneath of Meade’s #28 machine and got along side him coming to the checkered flag. In a photo finish, Meade was able to edge Collins at the line for win.


Wheeler Excavation Street Stock feature action started hot and heavy with an intense fight for the lead right off the initial green flag. Gene Sharpsteen went from his 3rd place starting spot to the lead early while the top five brawled for position behind him. Steven Deinhardt mimicked his heat race performance by going from 6th to the race lead once he was able to work through the fierce battling going on around him. Once he was up front, he was untouched for the rest of the night and cruised to a strong win.

Defending 600cc Modified Champion Chris Jordan has struggled with his title defense early this year. He started this week’s feature in 4th and took the race lead off of a restart after the first lap was completed. He was able to lead the rest of the race once he got to the front and initially picked up his first win of the season, but was later disqualified. James Randall ran a flawless race in 2nd place and was awarded the win after the post-race disqualification.

The Pop’s Automotive Factory Stocks dealt with a lot of attrition to start their feature. Mike Morse was the winner two weeks ago and found himself spun around at the bottom of turn two on the initial start of the race. A couple more first lap cautions gave Morse the opportunity to immediately recover and quickly found himself restarting on the outside of the front row. The rest of his race was incident free and he made a return trip to Victory Lane for the second week in a row.

Michael Roach’s Rookie Sportsman feature performance won’t be one he’ll ever forget. Roach started the 12 lap feature on the pole and showed a lot of speed early on. A couple cautions in the first half of the race tested his restart skills, but he never showed any weakness. Two-time feature winner Jamie Kamrowski tried his best to challenge Roach in the closing laps, but his attempts were unsuccessful and Roach went on to score his first career victory.

Five Rookie 600cc Modifieds took to the track for this week’s action, an increase from the previous show. Defending feature winner Taylor Wilk took the early race lead until she sacrificed it to Devon Green on the second lap. Devon wasted little time after he got out front and drove away from the field from that point on, taking a very dominating win.

Next week’s show on July 25th will once again feature all eight classes with the addition of the Dirt Nostalgia Tour’s first visit to the track this season.