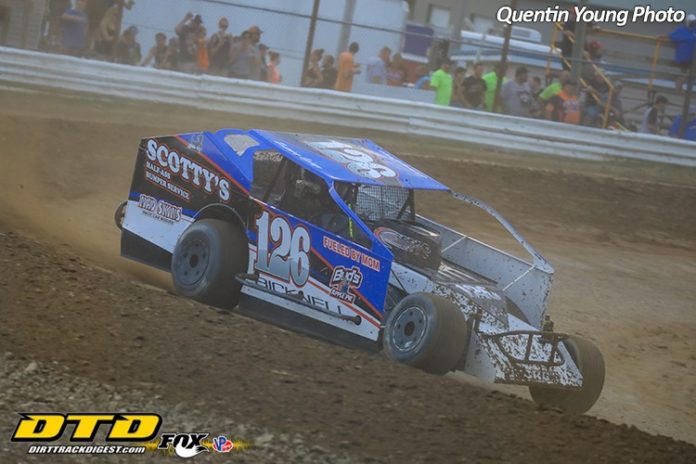 BATAVIA, NY – Second-generation driver Scott George earned his first career DIRTcar Sportsman win Saturday night and headlines the winners list at the Genesee Speedway. The show on July 18, 2020, was the last racing program at the Genesee Speedway for the time being. Early in the week, Genesee received a phone call and was served a cease and desist order from the State of New York regarding having fans in the grandstands.

The DIRTcar Sportsman feature was an instant classic. Zach George would take off into the early race lead over Dave Conant with Byron Dewitt and Kyle Inman moving into the top four. The veteran Conant would take the lead away from George and would start to open the lead-up. George would regain the lead past the halfway mark and would hold off Conant and Inman on a green-white-checkered to score his first career win. “I cannot thank my parents and all my sponsors enough, this is unbelievable”, stated race winner Zach George. “It is an unreal feeling to finally win”, George added. “My heart sank on the last lap and knowing that Dave (Conant) and Kyle (Inman) were behind me. I just had to hit my marks and keep it smooth and tonight everything came together.” “I cannot thank Scott Wolf enough for allowing me to drive his car at Outlaw on Friday nights. It gives me some extra confidence to get more seat time.” The win was a special one for Zach as his father Scott has won numerous features at Genesee. “To do something that my dad has done here is pretty cool and this win is special for sure”, George added.

Second place finisher Dave Conant was pleased with another consistent finish. “Zach was just a little bit better tonight. We tried to give him a run late but couldn’t close the deal”, Conant added. “Cadillac” has had consistent finishes all season-long at Genesee. Kyle Inman rounded out the podium. “We had to run where they weren’t. The bottom was definitely dominant and when Dave and Zach went side-by-side late, we had nowhere to go” Inman said. Jonathan Reid and Cameron Tuttle completed the top five.

“I want to keep winning and I want the fans back that’s for sure”, stated RUSH Late Model feature winner Jimmy Johnson. Johnson would work his way to the lead and was able to hold off veteran Bill Holmes, JJ Mazur, Doug Ricotta, and Greg Mrzywka to score his third win of the season. All of Johnson’s victories came when fans were not allowed in the grandstands.

Other winners at Genesee included John Zimmerman winning his second Street Stock feature of the season. Brandon Close scored the win in the Novice Sportsman. Close’s win was his first of his career and the division’s fourth different winner in four weeks of competition. Dante Mancuso in the Mini Stocks and Jacob Bansmer in the Bandits.

“Our local officials have gone above and beyond to support Genesee Speedway and we’ve been fortunate to host several events as a result of their collaboration with us”, comments track promoters Jim and Pam Johnson. “After receiving advice from our attorneys, tonight’s race will be our last for the time being”, Johnson added. Johnson announced at the driver’s meeting that he will be announcing his plans for the rest of the season in the coming weeks.

Sam Kozak has been taking pictures for the last couple of seasons at Genesee Speedway as the official track photographer. Saturday night was his last night as Sam and his family will be moving to Tennessee in the next couple of weeks. “I have to thank Jim and Pam for all of their support and for allowing me to be the track photographer,” Sam said. “They mean so much to me and I appreciate everything that they have done for me”.

94 cars signed in the pits for the racing action at Genesee. Track videographers Racingfanchaser88 provided a live stream for fans. The entire racing program was completed by 9:45 pm.