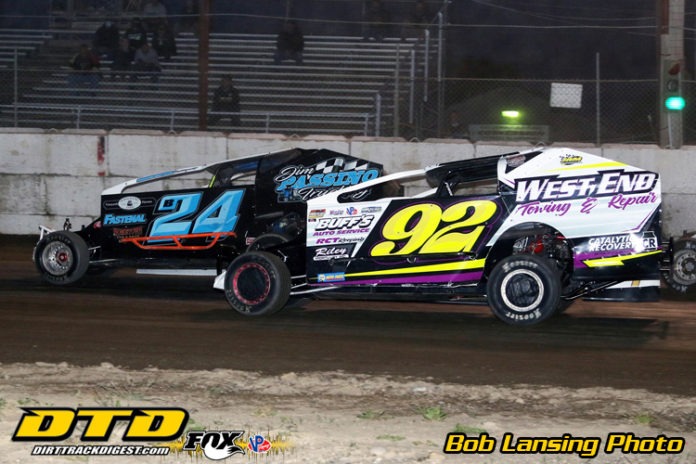 FULTONVILLE, NY – It was a hot summer night up on The Ridge. When things cooled off, it was Brendan Gibbons picking up a first career win in the Sportsman’s, while Cousin Luke added yet another trophy to his collection in the Prostocks.

Ryan Heath & Brendan Gibbons led the field to the green flag in the 30 lap Red Chair 602 Sportsman feature. Heath pulled out to the lead but would quickly feel pressure from the 69 of Travis Green. Heath would continue to lead until a caution came out on lap six for last weeks winner Bill August coming to a stop in turn two. Green would overtake Heath for the lead on the restart and opened up a comfortable margin until a lap 12 caution for the 33 of Cody Ochs getting turned around in turn one by the 92 of Dave Richer. Brendan Gibbons had snuck back up into the runner up spot during the previous green flag run and proceeded to pounce on the restart. Gibbons used the outside to grab the lead from Green and proceeded to pull away for his first career win at The Ridge. Green would have to settle for second while Justin Buff, Fred Proctor and Joe Orlando completed the top five.

In the Yurkewecz Auto Crushers Prostock feature, Tanner Warner set the pace out of turn four. He wouldn’t hold onto the lead long though as Beau Ballard shot out of a cannon & grabbed the lead in turns 3 & 4. Little did Ballard know that Luke Horning wasn’t too far off of his back bumper either as Cousin Luke drove around Ballard on lap three to grab the top spot. Horning opened up a lead that got cut back to nothing on lap six as a multi car incident occurred on the backstretch that included Tanner Warner, Ivan Joslin and Josh Coonradt. When racing resumed, all the field could do was watch Cousin Luke walk away and pick up his second win on the season. Beau Ballard got second, while Josh Coonradt rebounded for third, Justin Knight brought his car home fourth & Dave Demorest rounded out the top five.

Stephen Gray would sit on the pole for the 20 lap limited sportsman feature and pulled out to a sizable lead early. A caution on lap six for a car slowing on the backstretch eliminated that lead. Off the restart, James Venditti used the outside lane to take the lead from Gray. However, the car on the move was the 3g of Peter Lorenzo III. It wasn’t long before Venditti, Grey & Lorenzo were under a blanket and a few laps later, Lorenzo grabbed the lead away. However, with seven to go, a caution came out after Garret Poland & Carter Gibbons made contact out of turn two that ended with Poland sideways on the track. Stephen Gray used the restart to his advantage and regained the lead. Lorenzo tried to make a last ditch effort to reassume the lead but it was all for naught as Gray picked up the win. Lorenzo came across the line in second but didn’t make weight and was disqualified. This awarded Troy Zilles second, Venditti third, Carter Gibbons fourth and Issac Walker completed the top five.

In the streetstocks, Damon Anderson & Adam Tranka put on a show for the top spot as they were side by side the majority of the race. In the end, Tranka came away with the lead and picked up his second win of the year. Anderson finished in second while last weeks winner Matt Mosher rounded out the podium.

The Tobias Empire All Star Slingshots were kicked off by Danny Ballard. However, he was challenged early on by “Mr Slingshot” Brett Putnam. Putnam used the outside lane to constantly contend with Ballard until the red flag came out for the 621 of Tyler Vadney who ended up on his side at the top of turns three and four. This set up a one lap dash to settle it. Ballard didn’t waiver however as he picked up his second win of the year. Putnam would finish in second whole last weeks winner Nick Auspelmyer got third and Tavien Blowers & Darryn Fallis completed the top five.

In the junior slingshots, it was all Brock Pinkerous as “Bam Bam” went wire to wire and picked up his first win of 2020. Frank Twing Jr fell one spot short of getting three in a row, while Lucas Duncan, Matt Backus & Sloan Cherko rounded out the top five.

In the mini stocks, Josh Kane remained undefeated on the season as he picked up his fifth win of the season, while Dale Van Allen picked up the win for the single cams.