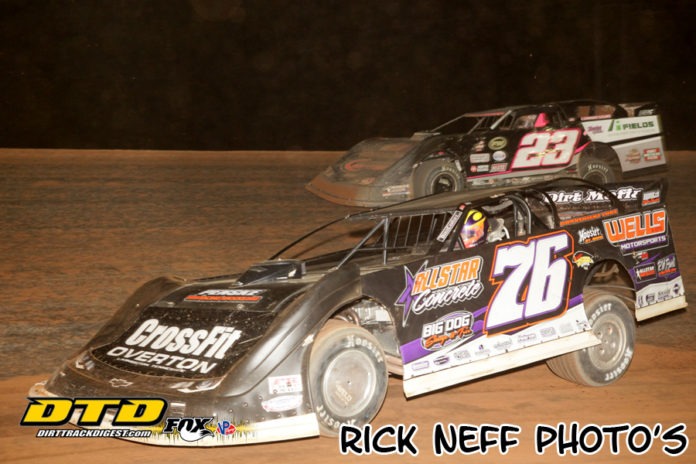 After a spin by Matt Dooley on the opening circuit, Chris Madden would take the initial race lead, with Brandon Overton, Mark Whitener, Tyler Millwood, and Ross Bailes giving chase. A tangle on lap two between Donald McIntosh and Pearson Lee Williams would again slow the action and on the restart, Whitener would roll past Overton to take the third position.

After two more cautions, action would settle down for a few circuits and Madden would stretch his lead as he started working slower traffic on lap nine when the caution waved again for a spin by Brian Nuttall, Jr. Madden would continue to hold the lead after the restart, while Whitener and Overton would trade the second spot for two circuits, with Overton finally taking the spot.

This turn of events would allow Madden to stretch his lead and only a pair of cautions would slow the charge of Madden at this point. After a restart on lap eighteen, Madden quickly pull away and would begin lapping slower cars on lap twenty-six and as Madden began to work traffic, Overton would close the gap between himself and Madden to less than a second when the final caution would wave for Ross Bailes, who slowed in turn four with a flat left-rear tire.


The final restart would see Overton launch off the high-side of turn two for two laps until he would clear Madden with a slider in turn four to take the lead on lap thirty-one. Overton would see the checkered flag first, with Madden coming home second, while Steven Roberts would make a late-race charge to grab the final podium position with a third-place finish.

Michael Page would start tenth and finish in the fourth position, while Joseph Joiner would complete the top five after starting fourteenth. McIntosh would recover from an early race spin to come back to finish sixth, while Jason Croft, Whitener, Cory Hedgecock, and Austin Horton completed the top ten finishers.

The next event for the Schaeffer’s Oil Southern Nationals Series will be Friday July 17 to Needmore Speedway in Norman Park, Ga. paying $10,053-to-win.