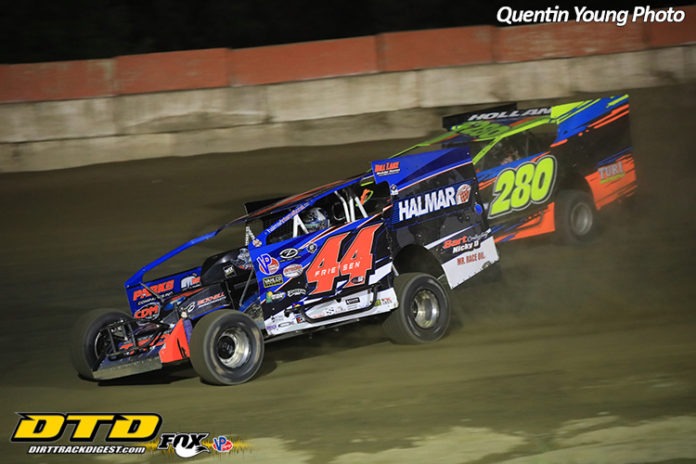 Shaun Walker was the first person to chase Friesen, with Friesen leading Walker through the opening set of laps. On an early restart, Danny Creeden snuck past Walker, with Justin Holland following through for third. Creeden and Holland had a nice fight brewing, with Holland grabbing second following a lap 13 restart.

While Creeden and Holland battled for second, Friesen had built up a two-plus second lead. At halfway, this lead had started to fluctuate with traffic, but a yellow on lap 27 erased the lapped cars for Friesen. Creeden snuck back by Holland on the restart, but just couldn’t match Friesen’s pace.

By lap 35, Friesen’s lead was back to roughly three seconds, but traffic loomed again. Creeden initially closed in, cutting the lead in half, but didn’t seem as maneuverable as Friesen once they caught some faster traffic. This allowed Friesen to build up a full straightaway lead with five laps remaining, still picking off a lapped car at a time.


Friesen seemed checked out and gone, but a lap 49 yellow canceled his lead and put Creeden right on his bumper. However, a flawless restart didn’t give Creeden anything to work with, as Friesen crossed under the checkered flag first after 51 laps. Following Friesen was the duo of Creeden and Holland, with Walker and Brian Malcolm completing the top five.

“I got a lot of memories racing Mike here, so this means a lot,” said former track champion Friesen. “This place is a bit tough in the heat races, but always widens our nicely for the feature. After the track rework before the feature I found a line rolling the middle and top, kind of diamonding one and two and I really liked it. It’s always fun to come back here and even more fun to win.”