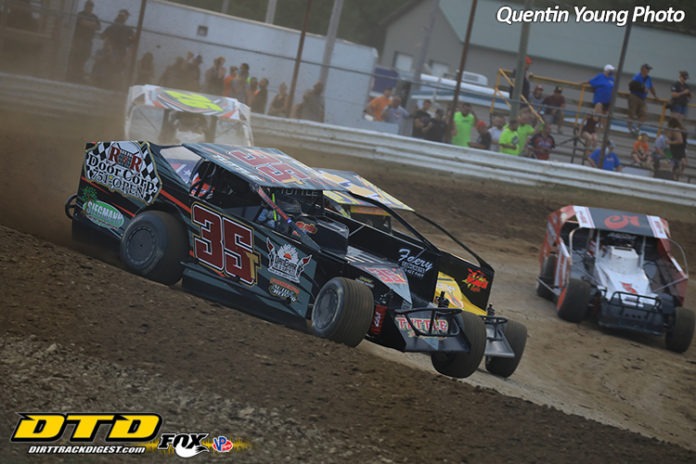 BATAVIA, NY – The drivers and crews returned to the 1/3rd mile Genesee Speedway Saturday Night for the annual Gene Dewitt Memorial and it was former Pro Stock track champion Dan Schulz scoring the win in the Street Stock division. Second-generation driver Cameron Tuttle scored the win in the DIRTcar Sportsman for his first win of the season.

The 2020 edition of the Gene Dewitt Memorial for the Street Stocks saw Brandon Sherwood show the way over qualifying heat race winners Shawn Hazlett and Jesse Qutermous. Qutermous was able to get the car thrashed in the pits and came back out six laps down. The restart would see Sherwood continue to lead over former Pro Stock track champion Dan Schulz. Schulz would take the lead away from Sherwood on lap nine with Bill Taylor and Pat Powers moving into second and third, respectively. Sherwood’s night would end on lap 13, going off on the hook of the tow truck. Schulz would power into the lead off the restart over Taylor and John Zimmerman. Zimmerman would move into second. Schulz would go on to score the win. “It’s an honor to win this race tonight,” Schulz said in victory lane. “Gene’s cars were always so special, and it is part of my childhood watching Gene’s cars so its special to win on this night”, Schulz continued.

Jim Harbison took off from his front-row starting spot to lead the opening circuits of the DIRTcar Sportsman feature over Cameron Tuttle, Dave Conant, James Henry, and “Zeke The Streak”, Ray Bliss Jr. Henry would spin in turns three and four to slow the field down for the first time on lap three. Zack George, who earned his first career win at Genesee three weeks ago, came to a stop on the entrance to the pit road on lap three as well. Tuttle would challenge Harbison for the lead on the restart as Kyle Inman battled with and passed Noah Walker on lap five to enter the top five. Walker would battle back to pass Inman off the early race restart to regain the position. Harbison would continue to show the way over Tuttle and Conant. Harbison would spin in turn one to bring out the caution on lap 15 after Jonathan Reid rode the backstretch wall. Tuttle would inherit the lead with Conant, Bliss, Walker, and Inman racing in the top five. Tuttle would pull away from the field to earn his first win of the season. Conant would finish in second over Bliss, Inman, and Walker. “We put a brand-new set up in the car and tonight was really good” stated Tuttle. “It rolled right on the top of the track and the track surface was really racy tonight”. “When my shock tower broke it was really hard to drive it and it was a one of a kind trip to victory lane being on the back of the tow truck”, Tuttle added.

Late Model veterans Paul Grigsby and Bill Holmes pulled away from Austin Hauser in the RUSH Late Model feature. Holmes would pull off the track on lap 10, giving up the runner up spot. Jimmy Johnson would quickly reel in the leaders and with five laps remaining, would close the gap to a couple of car lengths. The caution would come out on the last lap, setting up a green-checkered finish. The leaders would get together in turn four, causing a multi-car pileup in turn four, involving Grigsby, Johnson, third place running JJ Mazur. The race leader for the second attempt at the finish was Austin Hauser. Hauser would score his first career win over Dave DuBois, Doug Ricotta, Tim Schram, and TJ Downs. “Not what I wanted but I’ll take it” Hauser stated in victory lane. “I’ve always been good at avoiding wrecks” Hauser chuckled. “I saw JJ (Mazur) checking up and I didn’t want my car to get wrecked, so I was able to avoid it.” “I’m definitely happy. In my sophomore season, I have a fourth, a sixth, a couple of heat wins and now a feature win. I cannot thank my wife Emily, my daughter Averie, my dad, and everyone for their support. We finally got graphics on the car this week so thanks to Big A’s Custom Graphics.”


Other winners at Genesee included “The Notorious One” Chris Leone in the Mini Stocks. For Leone, the win came after the trailer caught on fire, a flat tire on the truck, and having generator issues as well. Orval Harris picked up his first win in the Novice Sportsman and Jake Bansmer in the Bandits. For Bansmer, it was his fifth win in six tries this season.

For decades, the Dewitt name has had a special place in the local auto racing stock car scene mainly through the contributions and sponsorship from Gene Dewitt. The family name continues to race at Genesee, as grandson Byron drives the “Gene’s Machine” #34 in both the DIRTcar Sportsman and the Street Stock division. Gene was one of the most successful car sponsors in history fielding stock cars for Richie Evans, Doug Hewitt, Dutch Hoag, and Mike Logsdon as well as a few other drivers, including Jack Johnson. Gene’s sponsored teams won numerous races and championships over many years. Gene died in February of 1987, but his legacy lives on through the efforts of Byron and others.

“Gene’s the one who got this family doing this and I race for the Gene Dewitt name every week,” Bryon said. “That’s why I run the car number 34 because grandpa’s car numbers always added up to the number seven. Richie’s was No. 61 and Dutch Hoag was No. 7 and Doug was always No. 52.  Mike Logsdon’s number was always 34 and now mine is too. The digits of the car’s numbers always added up to the number seven. On the back of my car I have painted “Gene’s Machine” because that was what every one of my grandfather’s cars had on them.” The next generation of the Dewitt family is in competition at Genesee as Allison Dewitt competes in the Novice Sportsman, Bailey Logsdon runs in the Mini Stocks and Alexis Traxler in the Bandits.

97 cars signed in the pits for the racing action at Genesee in their first race back since the middle of July.