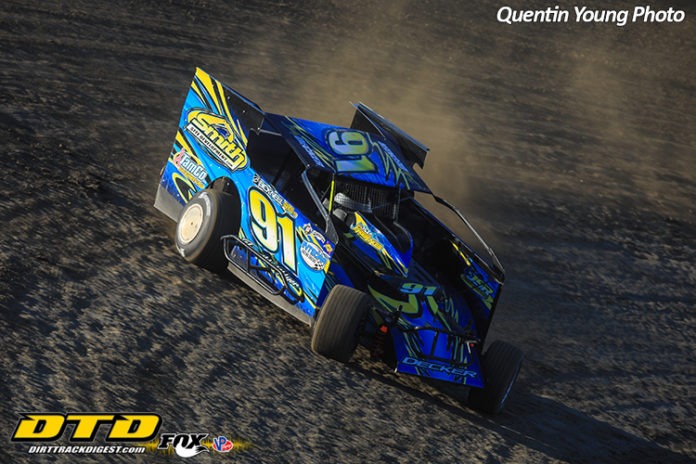 CENTER LISLE, NY – Another incredible show of dirt track racing was contested at the Thunder Mountain Speedway on Saturday, August 22nd. The track was very competitive all night long and the action that was displayed by all seven divisions proved it.

Bailey Boyd jumped out to an early race lead in the Open Modified feature from the pole position. He kept his car out in front for the first half of the race while a fantastic race went on behind him between Landon Cummings, Ryan Jordan, Jeremy Smith, Shaun Walker, Alan Barker, and Billy Decker. Ryan Jordan looked to be one of the best cars amongst that group as he used the top side of the race track to charge all the way up to the runner-up position. The track was a little bit wider than it has been in previous weeks, which ended up biting Jordan. He made a mistake coming off of turn four, hit the outside wall, and knocked himself out of the race. Just after that happened, Jeremy Smith and Landon Cummings tangled on the front stretch, taking Cummings out of the race. The ensuing restart saw Billy Decker and Shaun Walker line up behind race leader Baily Boyd. Boyd stayed committed to running the middle to high line, leaving the bottom open for Decker to use. Decker was able to pull up along side of Boyd multiple times, but he couldn’t complete the pass. Lapped traffic came into play in the final few laps and ultimately decided the race. The battle for the lead split the lapped car of Jesse Velez going down the back stretch and into turn three with Boyd on the very top and Decker on the very bottom. Decker had the better run down low and completed the pass off turn four. Decker would lead the final laps to win his third feature of the season. Bailey Boyd finished a very strong second place with Shaun Walker, Jeremy Smith, and Alan Barker rounding out the top five.

The DIRTcar 358 Modifieds have put on some of the best races in recent weeks and this week was once again no different. Shayne Spoonhower led the opening laps before Brandon Walters was able to chase him down and take over. Walters didn’t have the opportunity to run away as points leader Ronnie Davis III followed him to the front of the field and looked to challenge for the lead. The gap between the two closed in through lapped traffic, but the traffic would clear due to a caution. That allowed Michael Maresca to enter the mix. Maresca charged up the field from his 13th place starting spot and moved around Davis for second. He attempted to take the lead away from Walters, but another caution came out, this time for a flat right rear tire on Davis’ #32R ride. When the green flag returned, Walters’ challenge from Maresca quickly deteriorated when Maresca slowed coming off turn four and got spun around by Shayne Spoonhower after just one lap. This put Rocky Warner on the back bumper of Walters for the restart. Warner took to the top side of the track and got next to Walters on the final lap. The two were side-by-side off turn four with Walters on the bottom and Warner on the top. Walters squeezed away Warner’s line coming to the checkered flag and held off “The Flying Squirrel” for his second win of the year. Warner finished in second ahead of Willy Decker in third, Corey Cormier in fourth, and Jordan McCreadie in fifth. With the late race flat tire for Ronnie Davis III and top five finishes from both Brandon Walters and Corey Cormier, the tight points battle in this class will only get tighter heading into next week.

Another tight points battle also tightened up this week in the DIRTcar Crate Sportsman feature. Tim Guild was the early race leader from the pole position. He led the first six laps and opened up a large gap on the field behind him, but something broke in the right rear of his machine, bringing out the race’s first caution and knocking him out of contention. That handed the lead over to Daryl Krebs, who didn’t enjoy it for too long. Alan Fink started in 11th and was in second for the restart. He got a better restart than Krebs and took the lead away in the first two turns. Fink kept his #8 out front for a while, but he had a hard charging Matt Meade directly behind. The race would go yellow with just two laps to go, giving Meade one last opportunity to steal the win away. Fink proved to be too strong and went on to pick up his third win of the year. Matt Meade, Mike Button, A.J. Miller, and Rocco Leone completed the top five. With the win, Fink was able to make ground on points leader Tommy Collins, who finished in sixth after having to transfer through the consolation race. Hunter Lapp and Brandon Carvey had troublesome nights, which will allow Fink to pass them and move himself back into second in points.


Lanson Albanese has shown tremendous speed in his car over the last few weeks in the Wheeler’s Excavating Street Stocks, but none quite like what we witnessed this week. Rich Sharpsteen and Eric Boynton battled for the race lead on the opening lap. Sharpsteen won that battle, but was immediately under attack from Lanson Albanese. A brief caution put that battle on hold, which was reignited on the restart. Albanese got the best of Sharpsteen and took control of the race from that moment on. Albanese took advantage of the green flag laps that followed his pass for the lead and took the win by a half track over Eric Boynton, Gene Sharpsteen, Earl Zimmer, and Steven Deinhardt behind him.

The 600cc Modifieds put on another fierce and competitive race. Nolan Smith started on the pole and was able to keep the lead throughout the first half of the race. It wasn’t easy for him as he had very good cars in Justin LaDue, Tom Donahue, and Chris Jordan behind him. The race saw a restart at the halfway mark, which was exactly what Tom Donahue needed. He took the lead away from Smith and set sail until another caution arrived with four laps to go. Despite the late race restart, Donahue kept his car out front and claimed the checkered flag for the first time this season. The battling behind him was settled with Chris Jordan finishing second, Jake Waibel third, Justin LaDue fourth, and points leader Doug Windhausen coming home fifth.

The impressive win streak of Mike Morse nearly came to an end in the Pop’s Automotive Factory Stocks. Buck Mills Sr. started on the pole and led the race’s first ten laps. Mike Morse started back in sixth and was able to get himself up to second in the opening laps. Mills had a lengthy lead back to Morse, but it slowly closed in as the race progressed. A caution flew with five laps to go, erasing the lead that Mills had over Morse. Morse immediately went on the attack on the bottom of the track off the restart and found something his car liked. He completed the pass on Mills with just a few laps to go and kept his streak alive with another victory. Buck Mills Sr. was second across the line with his son Buck Mills Jr. finishing third, Luke Mills in fourth, and newcomer Kevin MacDonald rounding out the top five.

A new victor graced Victory Lane in the Rookie Sportsman division to cap off the night. The race was led early on by Michael Roach, but a lap five caution changed things. Off the restart, Blake Sarpriacone took the lead from Roach before Roach was turned around going into turn one. With Sarpriacone in the lead, this put Josh Allen to his outside. Allen learned something off of Sarpriacone’s move for the lead and did the same thing to take the lead for himself. He fended off all advances from that point on and took his first win over Blake Sarpriacone, Jordan Millard, Billy Fiske, and points leader Jonathan Fowlston.

We are now down to just three races remaining before we crown our track champions. Our final show for the month of August will happen on Saturday, August 29th to continue the great racing we have seen each and every week throughout all divisions.