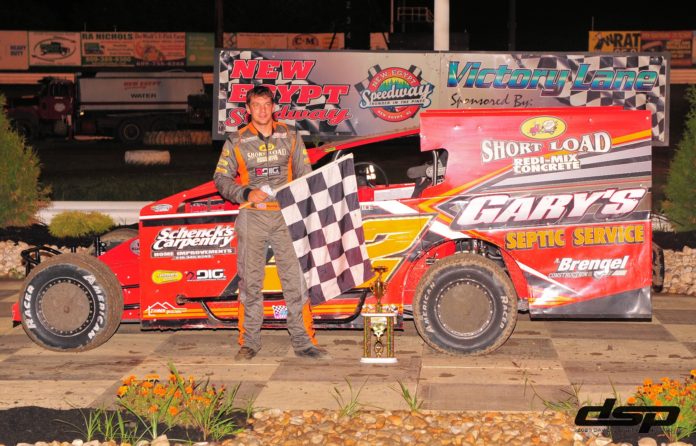 NEW EGYPT, NJ – Danny Bouc and Jimmy Blewett bested the New Egypt Speedway Vahlco Wheels Modified field in the 2nd Annual Modified Double Dip on Saturday winning the Twin-20 lap main events for the division. After clouds and rain much of the day that finally cleared around 5:00 for good, the race fans in attendance saw a very competitive night of racing.

The first 20-lap main event for the Vahlco Wheels Modifieds saw Chris Grbac lead the field to the green flag. Grbac led the field down the backstretch when the battle for the lead picked up in a hurry. Wade Hendrickson shot to the outside of Grbac while Davey Sammons shot to the inside as the lead trio hit turn three. Grbac pushed up the race track ever so slightly washing him and Hendrickson up the race track allowing Sammons to scoot through on the bottom and take the lead to complete lap one bringing Opening Night winner Danny Bouc with him in tow.

Sammons and Bouc pulled away from the field and started clicking laps off at a rapid pace.

The first and only caution of the event flew on lap 10 for Chris Grbac who rolled to a stop at the exit of turn two.

On the restart Bouc used his outside line starting position to his advantage to take the lead from Sammons. Bouc would extend his lead by 1.4 seconds over the remaining 10 laps to pick up his second win of the 2020 season.

“We’ve been struggling this year after that first win, it looked like it was going to be a really great year and we’ve just been behind the eight-ball every week. It’s good to get another win under our belt and give us a bit of a point lead back,” said Bouc post race.

Bouc would pull an invert of 14 for the second 20-lapper.

The second Twin-20 for the Vahlco Wheels Modifieds saw Jimmy Blewett and Dakota Kessler on the front row. Blewett would lead the first lap with invader Matt Stangle stalking the red, white and blue No. 76 through the first two circuits when the events first caution flew for Cale Ross and Steve Davis who tangled in-between turns three and four.

When green replaced yellow Blewett shot back out into the lead until a pileup occured in turn four that included the likes of Bryan Kuhl, Wade Hendrickson, PJ Oliver, John McClelland, Roger Manning, Kory Fleming and last week’s winner Dominick Buffalino. All drivers involved would pull away and tag along at the back of the field.

On the ensuing restart Matt Stangle was able to shoot past Blewett in turns one and two clearing him for the lead on the backstretch and bringing David VanHorn with him into second. On lap five the caution would fly yet again. Stangle jumped right back out to the lead and appeared to have the dominant car as Blewett moved past VanHorn and back into second.

It appeared that Matt Stangle would be well on his way to his second career New Egypt Speedway Modified win when his car seemed to lose power on the exit of turn two on lap 12. Stangle would then coast around to the frontstretch drawing the caution.

Jimmy Blewett would then inherit the lead with VanHorn now in second and Frank Cozze in third. The event’s final yellow flew on lap 15 when Frank Venezia and PJ Oliver got together in turns three and four setting up a five lap shootout for the win.

Blewett again shot out to the lead and would go uncontested over the final five laps to score his fourth career New Egypt Speedway Modified win over David VanHorn, Danny Bouc, Frank Cozze and Dominick Buffalino who rebounded from the early race pileup to finish fifth.

“I can’t thank the fans enough for coming out tonight, I know the weather wasn’t on our side today. Hats off to my crew chief Rob Ormsbee, in the first race the track was slicker than it was last week and we made a change where we went in one direction and we should have went in the other and in the second race it was better. We still have some work to do. I’m happy for my grandfather for giving me this car and being able to come out here each week and watch,” spoke Blewett after the event.

Danny Bouc would unofficially take over the point lead after point-leader and defending Vahlco Wheels Modified champion Billy Pauch Jr. missed the evening as he was in the hospital fighting some lower-intestine problems. We hope to see Billy back on track with is soon.

Larry’s Hot Rods & Harley’s Northeast Wingless Sprint Cars Presented By: The Meat Shoppe action saw Larry Drake lead the field to green as Drake jumped out front early. As the race neared the halfway point, Jeremy Quick crept into the picture reeling in Drake bringing Rich Mellor in to the battle for the lead as well.

At the lap 10 mark Quick made his move high and Mellor low making it three-wide for the race lead at one point. Quick would eventually clear Drake for the lead on lap 13 only to be surpassed by Mellor just four laps later for the top spot. Mellor cruised to his third win of the year followed by Quick, Drake, Brian Spencer and Heidi Hedin.

Bob Lineman utilized his pole position in the Sportsman feature leading wire-to-wire to pick up his first victory of the 2020 season and his 21st career placing him fourth on the all time win list. Jim Housworth, John Criscione, WIll Dupree and point leader David Burns completed the top five.

New Egypt Speedway is back in action this coming Saturday night September 5th with the John Romano Memorial for the Sportsman. The 30-lap avent will pay $840 to win and $84 to start. Also in action will be the Vahlco Wheels Modifieds, Ice Less LLC Crate Modifieds, Street Stocks and the Lyons Construction/Metal Fab Rookie Sportsman.

Like we do every year on Labor Day weekend, we will move everything back an hour, Pit Gates will open at 3pm, Grandstands at 4pm, with hot laps hitting the speedway at 5pm and the first green flag flying at 6pm. Adult (16+) admission will be $20, Seniors (65+) will be $18, Teens (12-15) & Military w/ID are $10 with Kids 11 & Under being FREE!.
New Egypt Speedway, which is New Jersey’s premier dirt racing facility, is located on Route 539 just minutes from Six Flags Great Adventure and the New Jersey Turnpike. A racy 7/16-mile D-shaped dirt oval, New Egypt Speedway serves Garden State race fans with some of the best competition in the country. New Egypt’s state-of-the-art facilities feature daylight-quality lighting and excellent sightlines from any seat in the house. The grandstands are fully wheelchair accessible with wide, clear, and well-groomed walkways. Concession facilities serve up everything from Jersey Burgers to ice cream treats at family-friendly prices.
For more information, visit online: www.newegyptspeedway.net, “Like” us on Facebook at www.facebook.com/newegyptspeedwayofficial, or follow us on Twitter @nesspeedway.