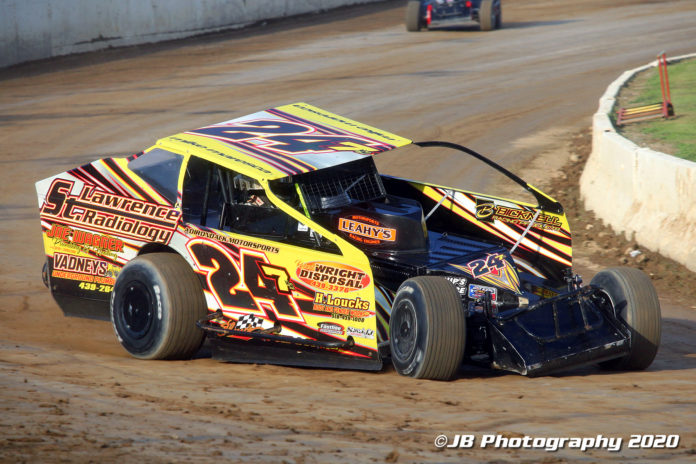 CENTER LISLE, NY – Mike Maresca hasn’t been a regular at Thunder Mountain Speedway this season, but one would never know that given his pace Saturday night. Maresca charged from 11th to the front in under ten laps en route to victory in the DIRTcar 358-Modified 30-lap feature.

Mike Stanton and Lucas Heintz battled for the lead at the start of the DIRTcar 358-Modified main, with Stanton narrowly leading Heintz in the opening handful of laps. A lap six restart saw Heintz blast to the front, with Mike Maresca throwing his car to the bottom and driving from fifth to second. Maresca quickly closed in on Heintz, peeking at the lead just before a lap eight caution.

Maresca wasted no time with Heintz, driving to the lead on the restart. Jordan McCreadie followed through for the runner-up spot, but by the time he reached second, Maresca was long gone. A lap 13 yellow reset the field, and McCreadie was ready to take a swing at Maresca. For the five laps following the restart, McCreadie hung tough on the bottom, but eventually Maresca got the momentum rolling up top and drove away.

Ronnie Davis III had climbed to third, then reeling in McCreadie as McCreadie dropped off the bumper of Maresca. With five to go, Maresca hit traffic, and Davis snuck under McCreadie. Despite the traffic, Maresca had little to worry about, as he had established a near-straightaway lead in the final laps. With the checkered waiving, it was Maresca scoring his first of the year at Thunder Mountain over Davis, McCreadie, Lance Willix, and Brandon Walters.

“We had a couple holes open up for us when we needed them,” Maresca said. “I was real good on the bottom early, but I saw a couple people rolling up top and knew I needed to get up there. We got a good setup that works in a wide range of conditions, you really have to slow down running the bottom here yet have to blast around the top. This car works good everywhere here and let me go where I needed to be.”