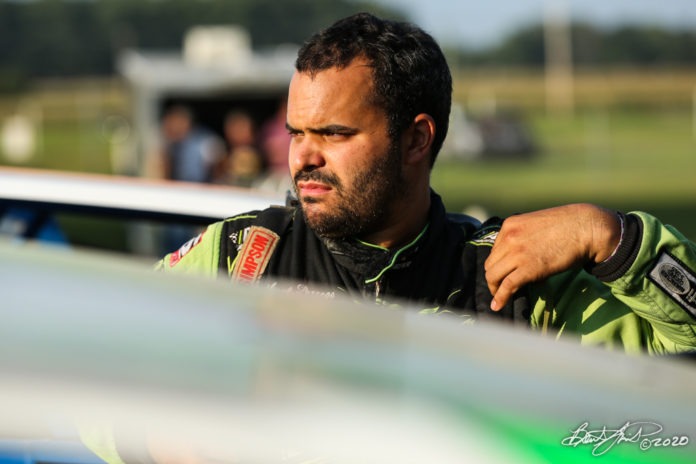 CENTER LISLE, NY – Anthony Perrego made his first start of the year at Thunder Mountain Speedway on Saturday night, storming from deep in the pack to take a dominating win. After reaching the front just before halfway, Perrego went unchallenged through the back half of the main en route to victory.

Eric Leet was the early leader over Kenny Hammond in the 35-lap Open Modified feature, with Leet quickly putting a good gap between himself and the pack. Hammond was left to fend off a pair of invaders, Andy Bachetti and Anthony Perrego, with both invaders sliding by Hammond by lap ten.

With heavy traffic, Leet’s lead evaporated. A lap 15 yellow saved Leet from the thick traffic along with Bachetti and Perrego, who were fixing to split Leet for the lead. On the restart, Perrego went to the point, while Bachetti dropped to fifth behind Hammond and Billy Decker.

As laps clicked off, Perrego walked away from Leet, who in turn was distancing himself from the battle for third between Hammond, Decker, and Bachetti. A lap 24 yellow reset the field, but the same scenario instantly reappeared within the top five.

A lap 31 caution gave Leet a final swing at Perrego, but Perrego fired fantastic. Perrego’s last four laps without competition, cruising to his first Thunder Mountain win of the year in his first start. Leet claimed a solid second, with Hammond, Decker, and Bachetti rounding out the top five.

“This is a new car and its working real well for us, Perrego noted. “I got put on the outside for a restart and found something up there. We were able to get out front and ride, with how good we were turning and how I was able to get through turns three and four, I knew we were going to be hard to beat.”