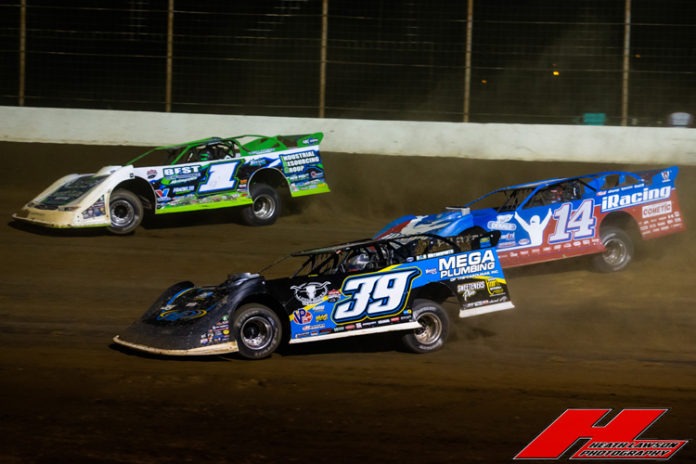 GREENWOOD, NE – Tim McCreadie made a daring pass on race leader Jimmy Owens on lap 78 to win the Al Belt Custom Homes I-80 Nationals on Saturday Night at I-80 Speedway. McCreadie earned $30,000 for his sixth Lucas Oil Late Model Dirt series win of the season.
Owens, the current LOLMDS Point Leader, finished in second followed by Ricky Thornton Jr., Josh Richards, and Kyle Strickler.
Richards grabbed the lead at the start of the event and led the first six laps until Brandon Overton wrestled the lead from him. Overton’s lead was short-lived as Richards charged back around him to regain the top spot. Richards held the point until third place starting Owens took over the lead of the race.
McCreadie got to second place, around Richards on lap 59. With Owens in front, two cautions came out on laps 64 and 70, which kept the field bunched up. With ten laps to go, the final restart saw Owens keep a steady pace ahead of McCreadie, but McCreadie suddenly bolted ahead of Owens as the duo were working lap 77. McCreadie held the lead until the checkered flag came out.
McCreadie’s 21st career LOLMDS win came over Owens by .872 seconds at the finish. “It’s hard to lead here. I began to diamond off one and two pretty good. My crew signaled to me that the 20 car was running hard through the middle in three. I had a little bit of run off of four and I figured if I am going to slide Jimmy Owens I had better clear him, because he doesn’t hit anybody on the track. My hat is off to the 20 team, they have been making us pay all year long. It’s an honor to run behind him for most of the year because he is a class act.”
Owens led laps 38 through 77, but finished second to McCreadie. Owens will still maintain a healthy point lead heading to Brownstown Speedway next weekend. “We put on a good show for the fans. With the cautions, it just let those guys catch up to us and gave Timmy a shot for the lead. He cleared me and he passed me good. The consistency we have had all year has been awesome. We have been very fortunate this year for sure.”
Thornton, who finished second in the Silver Dollar Nationals back in July at I-80, earned another podium finish on Saturday Night. “We were good. I was running around the top and I moved around a little bit. I really didn’t want that last yellow. As long as we keep running like this everybody will be excited.”
The winners Paylor Motorsports Longhorn Chassis is powered by a Cornett Racing Engine and is sponsored by Mega Plumbing of the Carolinas, Bilstein Shocks, VP Fuels, Sweeteners Plus, D&E Marine, and Racing for Heroes.
Completing the top ten were Brandon Sheppard, Hudson O’Neal, Kyle Bronson, Ryan Gustin, and Tyler Erb.
Lucas Oil Late Model Dirt Series
Race Summary
Optima Batteries I-80 Nationals – Presented by General Tire
Saturday, September 19th, 2020
I-80 Speedway – Greenwood, NE