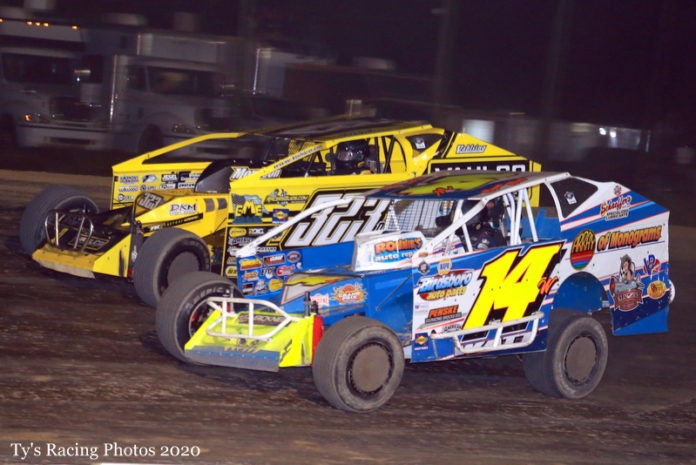 GEORGETOWN, DE – Ryan Watt reached the front just prior to halfway in Georgetown Speedway’s Friday night Modified feature, then put on a driving clinic in the latter stages en route to his first Georgetown win of the year. With the victory, Watt punches his ticket into Port Royal’s Speed Showcase 200 on October 17th, taking a locked-in starting spot on the grid.

David VanHorn led Watt and Richie Pratt in the opening stages of the 25-lap Modified main, with the top trio quickly distancing themselves from the rest of the field. By lap five, the front three had put a few seconds between their battle and fourth, with the top three separated by just a second themselves. As the tires rose to optimal temperature, Watt got quicker, inching in on VanHorn. By lap ten, VanHorn’s small lead had totally evaporated, with Watt diving low and stealing the lead.

Just as Pratt was fixing to make a move on VanHorn for second, the yellow waived at halfway. Watt got a fantastic restart, with Pratt continuing his pressure from before the caution and moving by VanHorn on lap 15. By the time Pratt made the pass, Watt was already out front by nearly two seconds.

With each passing lap, Watt’s lead steadily increased by a tenth. The groove around the black-slick Georgetown surface had slowly migrated to the bottom of the track, with Watt hooking up well through the middle and lower lanes. With the checkered falling after 25 laps, it was Watt scoring the victory and locked-in starting spot for the Speed Showcase 200, with Pratt, VanHorn, JoJo Watson, and Billy Pauch Jr. rounding out the top five.

“I didn’t feel great in the heat, but made a ton of changes before the Sprint Car race,” Watt said. “I guess those changes worked because it rolled right through the black real good. We went out with a used tire and wouldn’t stick the way I needed early, but the harder I ran it, the more it heated up and better it became. The track was great tonight, really slick and wide. It had no dominant groove, which made for fun racing.”