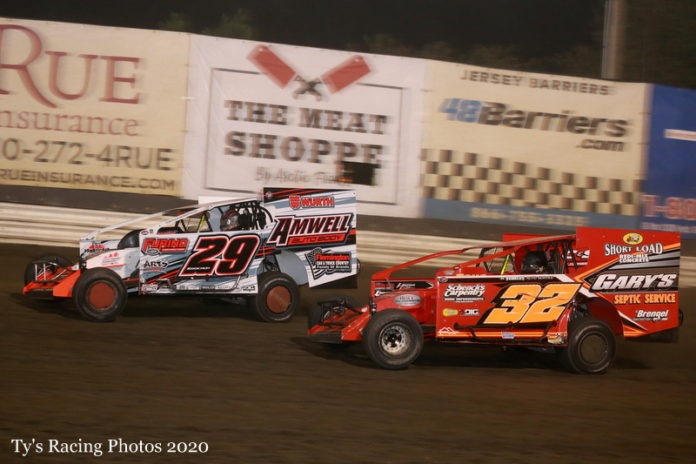 NEW EGYPT, NJ – 2020 New Egypt Speedway Vahlco Wheels Modified champion Danny Bouc took the lead from Ryan Krachun on lap 77 and sped off into the Central Jersey night picking up the win in the All Star Cup 100 worth $10,000. It was Bouc’s third win of the season after the Pennsylvania driver won the season opener on July 4th and a Twin 20 on September 5th.

On Friday afternoon Bouc was unsure he would even be able to make it to the track on Saturday night after suffering trailer problems that kept him on the sidelines on Friday night. Bouc was able to borrow an open trailer for Saturday and as the saying goes, the rest is history.

Brandon Grosso redrew the pole position for the 100 lap Modified main event, however the first yellow flag of the event would fly less than a lap in when Dakota Kessler was facing the wrong way in between turns one and two.

Grosso shot back out to the race lead with fast as of late Ryan Krachun hot on his heels moving into the runner-up position followed by Frank Cozze, Mike Gular and Dominick Buffalino. The second caution of the event flew when Jack Butler, making his Modified debut came to a stop on the backstretch on lap nine.

Following a caution on lap 11 for debris on the frontstretch, Krachun shot to the inside of Grosso to take the lead coming down to complete lap number 12.

The Big One occurred on the 14th circuit when JR Fulper, Dakota Kessler, Jim Britt, Frank Venezia, Kory Fleming and Brett Kressley all tangled coming off of the fourth corner.

Krachun continued to lead the way on the restart over Grosso with Billy Pauch Jr. taking his place on the podium for the first time, Pauch would find himself second by lap 20.

Entering lapped traffic for the first time on the 25th lap, Krachun appeared to have a hard time navigating through the slower cars allowing Pauch Jr. to creep up ever so slightly to the back of Krachun’s No 29k.

Krachun, who was in search of his first Modified win of the 2020 season tangled with the lapped car of Kory Fleming on lap 28 allowing Pauch Jr. to steal the lead. Krachun would not let Pauch get away as he stayed with him in traffic bringing third place running Brandon Grosso to make it a three car battle for the lead.

Once Pauch Jr. was clear of lapped traffic he started to put some distance between himself and the rest of the lead lap cars. Krachun, Grosso, Cozze and three time winner this season Dominick Buffalino found himself now in the top five.

Buffalino then put on an absolute clinic using the way outside groove to come from fifth to second in the remaining 10 laps prior to the halfway break.

With Pauch being the leader at the lap 50 mark, he earned $747.00 courtesy of the Chemidlin family in memory of John Chemidlin.

When racing resumed following the fuel stop, Buffalino made a bid on the inside of Pauch Jr. for the race lead on lap 51, trying to maneuver his No. 2 machine in between Pauch and the inside guardrail with the two top runners making contact, Pauch Jr. continued to hold the top spot. Buffalino would suffer a mechanical failure just six laps later ending his stellar run.

Following the restart Pauch Jr. and Krachun had a new challenger in Duane Howard as he entered the fray in third. Pauch Jr. continued his dominance though pulling away from Krachun and the rest of the field as the laps started to wind down.

It appeared that Pauch was well on his way to his third All Star Cup win until he suffered a flat right rear tire with just 30 laps remaining, relinquishing the lead back to Krachun with Howard, Cozze, Danny Bouc and Billy Osmun III running second through fifth.

Launching from fourth to second within a lap of the restart on the high side, Danny Bouc would then stalk Krachun for the race lead over the next six laps running the top to perfection finally clearing him for the lead on lap 77.

The rest of the race would go caution free as Bouc would pick up the $10,000 victory over Duane Howard who had gotten by Ryan Krachun on lap 89. Frank Cozze came home fourth with David VanHorn completing the top five.

“I wasn’t that good in the beginning, I thought I was going to be an eighth or ninth place car like I have been all year here,” said Bouc post race. “After the fuel stop, I just kept getting better and better. The top came in which kind of helped me out, the track got wide enough.”

“The car was pretty good, it was definitely getting faster as the race went on, those last couple laps I guess I wore through my sipes because I kind of leveled out. This thing was really really good tonight on long runs with the way we had it set up”

Dan Fleming won his second consecutive event in the All Star Cup 30 for the Crate Modifieds. Fleming took the lead on the sixth lap and went on to the $1,000 victory over Justin Grosso, Ryan Simmons, Johnny Bangs and Jon Meyer.