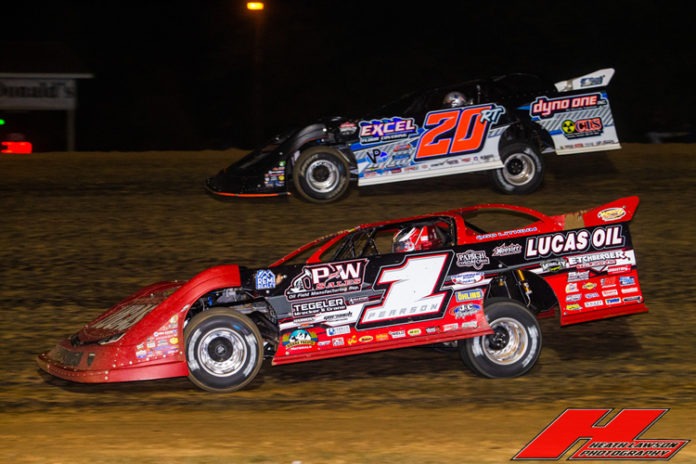 IMPERIAL, PA – Ricky Thornton Jr. picked a great time to get his first career win in the Lucas Oil Late Model Dirt Series as he captured the 32nd Annual Pittsburgher 100 on Saturday Night at Pittsburgh’s Pennsylvania Motor Speedway.
Moran led the first 16 laps of the race until Richards took over the point. Richards held the lead until Moran regained the lead on lap 36. The first caution of the race waved with 40 laps complete as the previously announced fuel stop would take place. Under the red flag Richards, who was running second, had a tire going down. Richards and several other competitors headed to the hot pit to change tires before the green would come back out again.

Thornton, who celebrated his 30th birthday on September 28, inherited the top spot on lap 82 when the top two drivers in the race, Devin Moran and Tim McCreadie, both headed to the hot pit to change flat tires. Moran had brought out the caution for his flat while leading. McCreadie picked up the race lead but his right front tire was going down forcing him to pit as well before a race restart commenced.

Thornton took advantage of several restarts in the final 18 laps to stretch his lead over the field as he went unchallenged to score the $20,000 victory. With the win Thornton became the 20th different winner this year on the LOLMDS tour. The all-time series record is 22 different winners in one season.
In Lucas Oil Victory Lane, Thornton celebrated his huge victory. “I think we were the only ones going hard on tires. We flipped a coin to determine what we were going to run. During that fuel break Taylon [Center] was looking at everyone else’s tires and he said there is no way they were going to make it all 100 laps without having some problems. It all worked out for us.”
Richards was seeking his third win in the famed event and came up just short. “Congrats to Ricky on the win. He was so good on the restarts. I’d like to thank my team, the fans, and the sponsors for supporting this Clint Bowyer Racing Team.”
Pearson came through the field to take third. “We had a shot on that last restart. It looked like Clanton was having a tire go down. We have been in the top five for the last three races, so that’s big for us.”
The winner’s Todd and Vickie Burns-owned SSI Motorsports Longhorn Chassis is powered by a Clements Racing Engine and is sponsored by Dyno One, Excel Floor Covering, Sub-Surface of Indiana, Certified Inspection Service Company Inc., West Side Tractor Sales, Swift Springs, Penske Racing Shocks, Slicker Graphics, and Hoker Trucking.
Completing the top ten were Jonathan Davenport, Chris Ferguson, Shane Clanton, Devin Moran, and Tanner English.
Lucas Oil Late Model Dirt Series
Race Summary
Pittsburgher 100
Saturday, October 3rd, 2020
Pittsburgh’s PA Motor Speedway – Imperial, PA