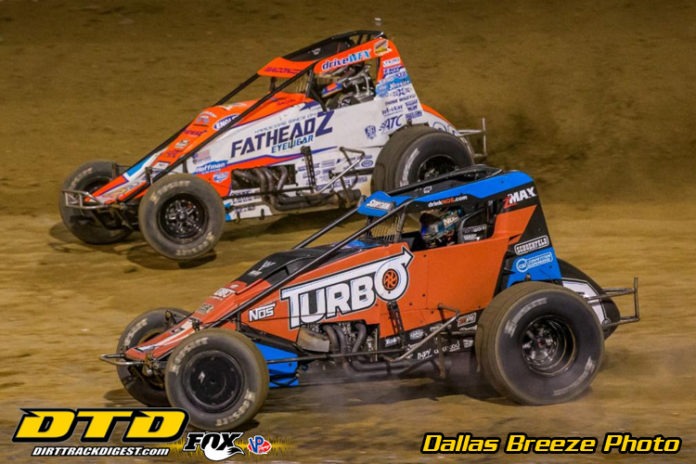 By: Richie Murray – USAC Media
LAWRENCEBURG, IN – For Brady Bacon, it was an unconventional way to celebrate a victory, standing at his hauler with his crew, family and friends by his side as the winner’s trophy was presented to him Saturday night at Lawrenceburg Speedway.
Bacon was already cognizant of being crowned the 2020 USAC AMSOIL National Sprint Car championship by virtue of, what appeared to be, a second-place finish.  Yet, after initial winner Tyler Courtney was found to be 15 pounds underweight during post-race tech inspection, Bacon was elevated to first place while Courtney was repositioned to the 22nd and final position in the results.
Anyway the cookie crumbled for Bacon, he’d take it, especially when it pays $10,000, which he pocketed after emerging victorious in the Fall Nationals all while becoming the 10th driver ever, and the first since Levi Jones in 2011, to win the final race of the USAC National Sprint Car season and the series championship in a single night, which he did aboard the Dynamics, Inc./Fatheadz Eyewear – DriveWFX.com/Triple X/Rider Chevy.
“I saw (Courtney) having some issues at the scales when we weighed, so I figured they were probably quite a ways off,” Bacon recalled.  “It takes away a little bit of it, but it pays the same, so we’ll take it.  Obviously, we’re very happy to win the championship, first and foremost, but winning the race is icing on the cake.  I’ve only won one other USAC race here and it’s the home of the Hoffmans, kind of a local track for them.  So, it makes it even more special.”
Bacon, who previously won USAC Sprint titles with Hoffman Auto Racing / Dynamics, Inc. in 2014 and 2016, brought home the Ohio-based team’s 12th USAC Sprint entrant title Saturday night.