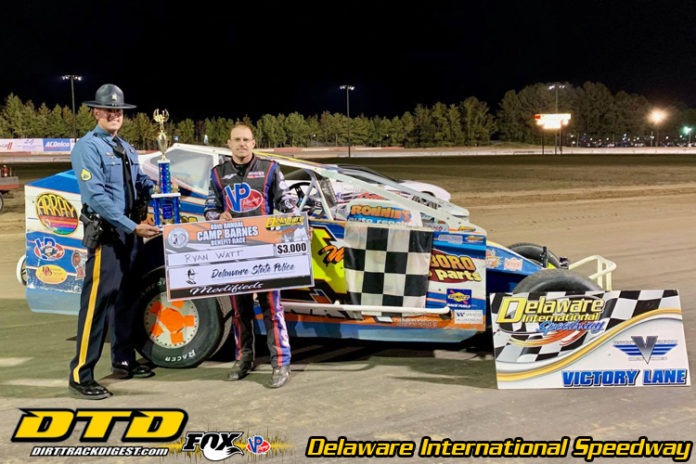 It was a classic, as track champion, Jordan Watson and Watt went door to door for the last 15 laps of the event with Watt edging out Watson at the start finish line.

In the beginning laps, it was HJ Bunting who put the pressure on Jordan Watson, running the high side of the Delaware ½ mile. Bunting completed the pass for the lead, which was retroed as the caution came out simultaneously.

On lap six, Watt began putting pressure on Watson for the lead and dove to the bottom of turns three and four and “slide-jobbed” for the top position.

The exchange was the race-winning move of the night, as Watson fought door-to-door with Watt for the remaining of the event to try to muscle back the top position.

It was Watt who collected the checkered with Watson, Ricky Elliott, Brett Ballard, and Joseph Watson rounding out the top five.

“This was awesome. We have struggled not getting in a rhythm racing weekly anywhere with COVID and not being able to experiment. We are kind of back to where we were last year,” said Watt in victory lane.

With the event starting in the daylight, track conditions were not ideal for Charlie Cathell. A brief intermission allowed Cathell to prep the track to his traditional liking. “I could use every inch of the track, it was awesome,” exclaimed Watt.

Ross Robinson capitalized on his pole starting position by collecting the $3,000 to win Super Late Model victory over Mark Pettyjohn.

“It was a good night. We had a really good car and had some luck on our side drawing the pole. It is cool to win a race here with this much history,” said Robinson in victory lane.

Jesse Leiby held off many restarts and challenges to capture his first win at Delaware International Speedway in the AC Delco Crate Modified feature event. Leiby fought off the many encounters of Tanner Van Doren, Adam White, Brad Trice and Westley Smith to collect the $1,000 payday.

The Delaware Super Trucks event was won by Jerry Hill.

Tippy Martinez was smooth in the Delmarva Chargers, holding off the challenges of Joey Waters.

Jamie Eicholz and Todd Miller were victorious in the Vintage division, respectively.

Camp Barnes is a non-profit organization run by the Delaware State Police, which provides free camp for the youth of Delaware.