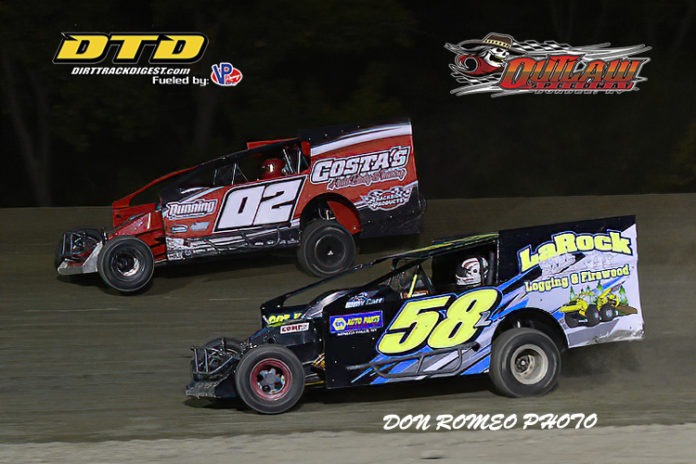 DUNDEE, NY – It was a night of first-time winners in 2020 as the Outlaw Speedway held Fall Series Event #5 this past Friday night.

After last weeks complete rainout, it was business as usual at the historic Yates County Speed plant as some 130 plus machines checked in making up the Super 7 Show.

Cory Costa of Corning, NY has become a household name over the past several years at numerous northeast Modified tracks.  The second generation pilot has had multiple runner-up finishes in the tough Friendly Chrysler, Dodge, Jeep, Ram Modified Division at Outlaw Speedway over the past several years and a huge win in the 3rd Annual Summer Nationals at the speedway, however with many of the top drivers in the region calling Outlaw Speedway their Friday night home track, trips to victory lane have been hard to come by.  However, on this night Costa unloaded fast right out of the box winning his qualifying heat, drew pole for the 30 lap feature, held off many time Outlaw Speedway Track Champion, The Hurricane Steve Paine and went on to his first win of 2020.

After experiencing several weeks of bad finishes towards the end of the Regular Season, Costa took some time off to refocus and returned to dominate the action having to withstand some seven caution flags which kept him from driving away from the competition and kept things interesting.  Behind Costa a spirited battle was raging between a mix of several Outlaw Speedway regulars and invaders including the likes of Hurricane Paine, The Doctor, Danny Johnson, Bossman Tyler Siri, Eldon Payne, Nick Nye, Brady Fultz, Alex Payne, Jake Dgien and Derrick Podsiadlo.  With the yellow flag waving numerous times it kept the field bunched and at the conclusion Costa was able to better Paine by less than a second on route to the win.  Paine had to settle for second at the finish but continues his Fall Series hot streak which includes one win and several top five finishes.  Invader, Nick Nye started in the fourth row along side of Paine and followed him thru the field to round out the top three podium finishers.  Eldon Payne put on the drive of the night starting eighteenth and came home for fourth while Brady Fultz started the event in the fifth row and rounded out the top five.

Karl Comfort has enjoyed a great deal of success at Outlaw Speedway during the shortened 2020 season and after what he considered to be a slow start the veteran Penn Yan, NY speedster turned up the wick late in the Regular Season to claim the Sunrise Insulation American Racer Tire Sportsman Track Championship and his momentum has continued into the Fall Series of events as he claimed his second feature event of the season.  Comfort began the twenty-five-lap affair lining up outside the second row as two-time 2020 class feature winner, Billy Paine brought the twenty-car field to the opening green flag. Second generation driver, Billy Paine would lead in the early going but Comfort was hitting his marks to perfection, moved around Paine by lap ten, withstood a couple late race caution flags and went onto the win.  Tommy Collins Jr., making a rare start on the American Racer Tires this season redrew into the eighth starting spot, drove a flawless race and came home to finish second as he was followed across the line by invader, Steve Davis who looked impressive in finishing third.  Billy Paine drifted late in the event but still held on for fourth at the completion as rookie competitor, Justice Mayo continues to turn heads by rounding out the top five.  Mayo began the event eighteenth, put on a steady performance and without the help of many yellow flags put on the drive of the night.


In the companion Hoosier Tire Sportsman Division it was third generation pilot Alex Payne taking full advantage of his pole position redraw spot to claim his fifth win of the overall season including win number two in the Fall Series as he cruised to victory.  Karl Comfort began the event inside the fifth row and put on another driving clinic to claim the runner-up spot at the completion of the twenty-five main event.  Stacy Jackson back once again driving the Tim Guild back-up machine began the event along side of Payne in the front row, put on a consistent drive in finishing third as AJ Lloyd and Kevin Ridley placed fourth and fifth, respectively.

2019 Stan’s No Tubes Street Stock Champion, Dylan Cecce has pretty much held true to his word of going into a semi-retirement after a highly successful “19” campaign.  Picking up a few rides along the way  in Crate Sportsman and Street Stock Divisions at both Outlaw Speedway and Woodhull Raceway, Cecce took control of the Crawford owned #8 Street Stock machine on this night filling in for Brett Crawford and never skipped a beat in picking up his first feature win in Fall Series action at Outlaw.  Cecce who lined up fourth was able to dispose of front row starters CJ Guererri and Jared Hill and went on to the popular victory.  Chasing Cecce across the line was Fall Series Event #2 feature winner, Adam DePuy while Guererri stayed with the lead pack throughout the entire twenty lap affair in claiming third.  Invader, Brandon Sherwood started alongside of Cecce in row two and came home fourth as Jimmy Grant completed the top five finishers.

In 4 Cylinder Mini Stock feature action Scott Lehman Jr. drew restarting pill two giving him a huge advantage over the rest of the twenty-car starting field.  Lehman Jr led throughout claiming his third feature win of the 2020 campaign and with that becomes the fourth different feature winner in Fall Series Mini Stock feature action.  Ray Hyer started eleventh on the opening grid and put on another one of his patented drives thru the field in claiming the runner up spot while Jason Smart rode home for third after starting tenth on the opening green flag.  Rich Conte ran within the top five the entire distance in claiming fourth while Jack Ormsby started fifth and that’s were he ended the event.

In the IMCA Hobby Stock twenty lap feature all eyes were on Marc Minutolo to see if he could keep his undefeated Fall Series feature win streak alive.  The Big Fella had won the previous three Hobby Stock features and with a good redraw spot of eighth, Minutolo look poised to run the table once again.  However, regular weekly competitor, Justin Eldredge had other ideas as he started right along side of Minutolo, got the jump early and never looked back in claiming his first feature of the season.  Minutolo settled for second padding his Fall Series Point lead while invader, Buck Mills Jr. rode home for third after starting in that same position at the start of the twenty-lap feature.  Shawn Lloyd finished fourth while Brett Ayers rounded out the top five finishers.

The IMCA Modifieds made a return engagement at the Outlaw Speedway, their first trip back since the completion of the Regular Season and the field was litter with both track regulars and outsiders.  Matt Roberts is certainly no stranger to IMCA Modified competition having turned the wheel in other forms of competition along the way as well.  Roberts began the twenty-lap feature in starting position three, got to the point and never looked back in making his first start at Outlaw Speedway in 2020 one to remember.  With Roberts win he added his name to a list of first-time feature winners this year including Cory Costa, Dylan Cecce and Justin Eldredge.  Chasing Roberts across the line it was mostly all invaders as Fast Eddie Sites claimed the runner up position followed by Rick Watt, Justin Chaddock and Ray McClure who rounded the top five at the finish.

Up next at Outlaw Speedway on Friday, October 16 it will be round #5 of the Fall Series events while are tentatively scheduled to conclude on October 30.

With stringent NYS Health Department and Governor Cuomo regulations stating that still NO FANS in the STANDS it will continue to be pit admission only.

For those that cannot attend high quality audio and visual viewing can be obtained by logging into www.DirtTrackDigest.TV for more information.

For more information including classes of competition along with other updates leading up to the event simply go to www.Facebook.com/OutlawSpeedwayLLC/.

A current list of the Regular Season as well as Fall Series Point Standings along with other valuable information can be found at www.outlawspeedwayllc.com.