PORT ROYAL, PA – Matt Sheppard put on a dominating performance in Thursday’s Speed Showcase 40 at Port Royal Speedway, taking the lead early and motoring away from the pack to snag a $5,000 payday. The opening night win leads into the richest Modified event of the season – the Speed Showcase 200. 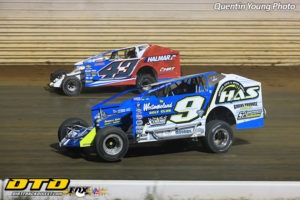 JoJo Watson took command at the start of the 40-lap Modified feature, with Sheppard and Max McLaughlin trailing early. The opening stages were plagued with cautions, and with cautions come restarts. Following a lap three restart, Sheppard snagged the lead, bringing McLaughlin with him into second.

Big movers included Mike Mahaney, driving up to third on lap seven after starting eighth. Even with the short bursts of green flag action, Sheppard flexed his muscle, putting three seconds between himself and McLaughlin before a lap 12 caution.

McLaughlin appeared to have the second best car during the middle stages of the race, but popped the wall on lap 17 and cut a tire down. With his run over, this left Mahaney to inherit second, followed by Billy Pauch Jr., who started near the rear of the field. With new challengers behind him, Sheppard was unfazed, driving away from the battle for second between Mahaney and Pauch. At halfway, Pauch took second from Mahaney.

The battle for second had expanded from two cars to three, with the addition of consolation winner Mat Williamson. While Sheppard motored away, the trio of Pauch, Mahaney, and Williamson fought over second, with Pauch slowly putting distance between himself and Mahaney. One driver with lots of distance between himself and competition was Sheppard, as his lead hit 4.5 seconds at lap 30.

In the final ten laps, Mahaney reeled Pauch back in slowly but surely, dragging Williamson along with him. Out front, Sheppard was unchallenged, driving away from any challengers en route to a dominating win to kick off the Speed Showcase weekend. Finishing a distant second behind Sheppard was Pauch Jr., followed closely by Mahaney, Williamson, and Peter Britten.

“I definitely didn’t like all those cautions,” stated Sheppard. “I wanted to be up top, but 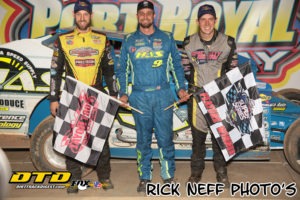 didn’t necessarily want to restart up top. Luckily I was racing around some really respectful guys who left me space up there. The cushion was treacherous, but I’m sure clean air helped that some. I had to move around for lapped traffic and found out I was good elsewhere other than the top, so I’m feeling pretty good entering the weekend.”

Billy Pauch Jr., the lone soul left on torsion bars in the Modified pits, charged from the consolation race to finish second, bringing him good momentum into tomorrow and Saturday.

“We just got behind early with a bad draw,” Pauch Jr. said. “We got rolling really good later on in the night. I’m not sure if I could’ve got Matt there at the end, but we seemed to even out in traffic. I hope the top stays like this all week because it’ll make for an awesome race on Saturday.”

Mahaney had a good week in New York last week, continuing his momentum with a podium tonight.

“It feels real good to be locked in,” Mahaney noted, as the top four tonight locked into Saturday’s 200-lap main. “We came forward all night, we’re definitely hitting something good and rolling nice. We were real good right through the middle tonight, which is a great sign heading into Saturday when the track will be really slick after 200 laps.”