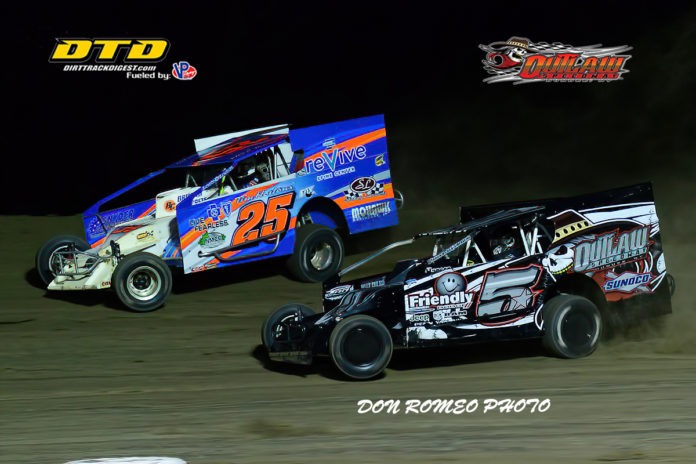 DUNDEE, NY – Erick Rudolph would pick up a huge win on Friday night in the Fall Series Finale at the Outlaw Speedway holding off a hard charging Tyler Siri.

Ron Cartwright and Danny Johnson lead the field of 32 to the green green flag, with Erick Rudolph wasting little time getting to the front.  He and Johnson would be side by side for the lead early on lap 3.

While Danny Johnson and Erick Rudolph battled for the lead, Tyler Siri would be on the move passing numerous cars and even making contact sending Cory Costa up over the birm. Costa would save the car but lose many spots in the process

The first yellow would fly on lap 6 as the pole sitter Ron Cartwright would go pit side with a left rear flat. When the green would come back out, it was Danny Johnson who pulled back ahead of Rudolph for the race lead.


As Tyler Siri made it three wide for third, Alan Johnson and invader Bobby Varin would battle further back in the top 10 for 8th but the yellow would fly on lap 8 for a slowing Tony Pangrazio.

When the green flag flew again it was Eldon Payne and Brian Swarthout who made contact on the front stretch, causing another yellow as both spun to a stop.

Once the race got going again it was Rudolph who jumped out to a sizable lead ahead of the Siri machine while early race leader Danny Johnson jumped the cushion and lost approximately ten spots in the running order.

As the leaders would catch lap traffic Alan Johnson and Varin would be side by side down the backstretch for 3rd but that battle was slowed by a lap 24 yellow for Brian Swarthout whose suspension broke.

With only a few laps to go, and a clean race track in front of him, Erick Rudolph was able to take command on the restart and cruise to victory in the 30 lap season finale at the Outlaw Speedway.  Tyler Siri finished in second, with Alan Johnson, Cory Costa and Bobby Varin completing the top five.