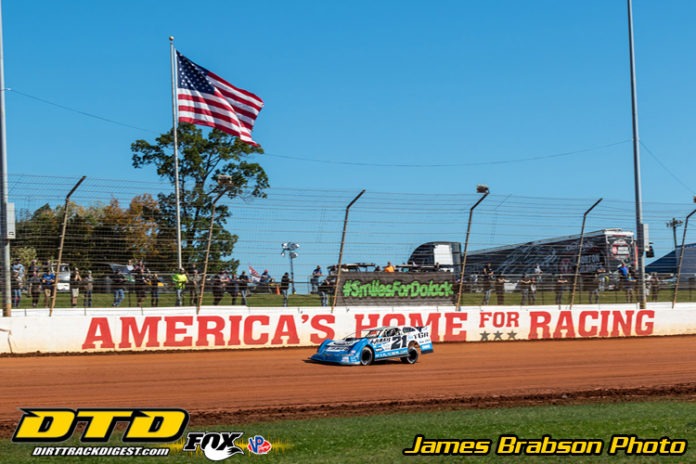 CONCORD, N.C. — The Drydene World Short Track Championship went into full swing Friday with 335 cars invading The Dirt Track at Charlotte for the epic two-day event that annually puts weekly racers on the big stage in a celebration of grassroots racing. Starting at 2PM ET to make up the previous day’s Hot Laps, postponed by a tropical storm blowing through Concord on Thursday, six divisions blew through qualifying and Heat Races over the next eight hours to set the front rows of the starting fields for Saturday’s Features, while the seventh division of the night, the VP Racing Fuels Hornets, capped off the night with three 15-lap Features.

The heats started with fast qualifier John Ruggiero Jr punching his ticket to the Feature, winning his Heat unchallenged. Michael Smith and Justin Mintz took the other two transfer spots.

Heat two winner Brian Mullis secured his spot in the Feature along with Rod Tucker and Chris Joyce. 13-year-old Carson Ruark was in the final transfer spot, but a caution on lap four closed the gap and he was unable to seal the deal.

In the third heat Colton Trouille started inside second row and quickly found his way to the front to take the victory. A caution on lap five changed the transferring racers as Chuckie Duncan came from fifth to second in one lap, racing his way into the Feature along with Royce Bray, who took the final transfer spot.

Heat number four had a couple of minor cautions, and when the dust settled Austin Mintz took the victory followed by Seth Wimpey and Mark Wilbanks.

Heat five for the 602s will be the most talked about race tonight as Booger Brooks rolled his car in between turns one and two, turning it over multiple times. He was running second at the time and would likely have transferred to the Feature. Devon Morgan went on to win, followed by John Price and BooMan Galloway.

The last heat of the night for the 602s was caution-free. Pole-sitter Dale Timms led flag to flag, winning while Blake Craft and Brandon Dockery took the final two transfer spots.

Killer Kyle Bronson was the only Heat Race winner to come from outside of the front row, putting on a remarkable drive to win the second Heat from fourth. Matt Long and Justin Hudspeth also made the transfer.

Overton kept his perfect night rolling with a dominant win in the third Heat, with Dillon Brown and Gary Dillon behind him.

Gray Parton followed Overton with a W in the fourth Heat. T. J. Salagango and Lucas Ruark secured their spots in Saturday’s Feature.

Ruggerio continued his hot streak by controlling the fifth Heat, with Jamison McBride and Bryan Mullis in second and third.

And Brett Hamm brought the night to a close by taking the sixth and final eight-lap preliminary race. Justin Smith and Clay Harris also made the Feature.

Two-time World Short Track Champion Kyle Strickler put away his DIRTcar Late Model for the weekend to come out and battle his old UMP Modified rivals, and for not having driven a Modified for the better part of the 2020 season, it looked as if he never left.

Right to the top of the charts Strickler went in Qualifying with a lap of 17.149, a whole .200 faster than the second-fastest car, setting him on the pole for Heat Race #3. That second-fastest car was none other than the two-time and defending World Short Track winner and arguably Strickler’s biggest competition in this event, Summit Racing Equipment Modified Nationals Champion Nick Hoffman.

Hoffman opened up the Heat Racing action from the pole of Heat #1 and handed the UMP Modified crowd their most shocking and interesting storyline yet. Coming back to the stripe to complete Lap 1, Hoffman slowed dramatically and pulled down into the infield, out of harm’s way. Dan Davies was there to pick up the pieces in the caution-free race and took the checkered flag in convincing fashion over Maryland’s Justin Cullum, who joins Davies in Saturday’s redraw, Daniel Sanchez, Jesse Rocket and Clay Harris.

A broken fuel pump valve was the culprit in Hoffman’s misfortune, which will now send the two-time DIRTcar national points champion into a Last Chance Showdown event on Saturday. An odd place to find the Mooresville, NC-driver at any race around the country.

David Stremme came out on top of Heat Race #2, leading every lap on his way to a spot in Saturday’s redraw. Coming into this year’s event as the driver with the most top-fives without a win, Stremme’s chances to finally get it done in the Feature look pretty solid. Ty Rhoades, Jonathan Taylor, Ryan Toole and William Long also transferred into the Feature.

Strickler gassed it up for Heat Race #3 and put a whooping on the field, opening an enormous gap – almost a full straightaway – between he and the others before the yellow erased it with just two circuits remaining. It was no problem for The Highside Tickler claiming his spot in the redraw, taking the win over Curt Spalding (redraw), Drake Troutman, Mike Franklin and Austin Holcombe.

The fourth and final Heat Race saw Indianan Dylan Woodling grab the checkers in a very competitive bout around the 4/10-mile, with Chris Arnold joining him in the redraw, followed by transfer cars Brandon Kinzer, Jerry Foster and Cody Brightwell.

The first of four Heats went to the No. 44 of Jeff Parsons, who was fastest in Qualifying Group A and second overall. Wes Helms came out strong, piloting his No. 98 from P.7 to P.2 in the first lap, and then pressed on the leader when Patrick Field blew up, causing a restart with two laps to go. Helms stole the lead from Parsons for just a moment, ultimately finishing in second. Steve Axtell, AJ Belanger and Caleb Fulp all grabbed their spots in tomorrow’s Feature.

Robert Poole dominated Heat 2 in the No. 25, taking the lead on the first lap and holding it to the checkers. Behind him, Chris Stowe took second from Justin Blevins, who started on the pole. Daniel Parker charged up from P.6 to challenge Blevins, but had to settle for fourth. Kevin Pangrazio, who lost a wheel during the first set of Hot Laps, took the final transfer spot.

Ty Norder was not so lucky. Coming out for Heat 3 his front right wheel wasn’t spinning and he pulled off the track, ending his night before the race even begun. Trey Stemper led all six laps, after a charge from Buck Stevens had the two going wheel to wheel out of Turn 4 into the final lap. Preston Blalock, who had worked his way into fourth from his seventh starting position, lost four spots going into Turn 4 as he battled Kevin Dugger for third, but managed to work his way back up to a transfer position behind the 92 of Larry Martin.

Jake Barneycastle, who spun out during Hot Laps, jumped to an early lead in the fourth and final heat, stealing the lead from Lawson Rogers on the backstretch. A number of hits, spins and cautions made for an exciting race, but the highlight was the final lap as Rogers made a charge on Barneycastle for the lead and the two came together, knocking doors in Turn 4 before Barneycastle took the checkers. Greg Brown, Ryan Morgan, and Chase Cardwell secured their spots in tomorrow’s Feature.

Tyler Love, from Lancaster, SC, took the win in Heat 1. Love took his Hamm-built Street Stock to the lead after starting on the outside pole position. The Johnson Racing chassis served him well as he drove off for the win. Damon Crump, Blake Pryor, Justin Morris and Kris Frost also transferred to the Feature.

Pole-sitter Chris Rice was hammer down from the get-go. His Drydene Racing Formulas Street Stock was quick and handled well enough to bring him home in the top seed. Also transferring from Heat Race 2 was Ricky Greene, Joe Belkey, Johnny Westmoreland, and Earl Petty.

Calob McLaughlin, out of Belmont, NC, took an impressive win in Heat 3. McLaughlin held off Thomas McCurdy. Bradley Weaver, Junior Johnson, and Tre Beaty, who also qualified for the Feature.

Tack Brown [4B] took the lead in Turn 1 of the first heat from pole-sitter Spark Parris [43] and led to the finish, fending off several challenges from Parris who would go on to finish second. Pete Brew [12B] held his position to fill the final transfer spot and move on to tomorrow night’s feature.

Matt Gilbert [117] snuck by pole-sitter Austin Brown [O4] on lap one of Heat 2, but Brown was able to regain the lead on lap 3. The two battled on the final lap, but Brown held off the attack to win Heat Race 2. Finishing third, in the final transfer spot, Casey Towell [97] advanced to start in Saturday night’s feature.

Pole-sitter Nick Walker [O] led flag to flag to win Heat 3. On lap two Travis Mosely [19] moved into third place for the transfer, but a parts failure on the following lap sent him to the pits. With one to go Carl Currin was able to move into the third and final transfer spot. Logan Ritchey [10] finished second.

Nick Broome [O7] won Heat 4 with Brandon Clements [7c] finishing second. The third and final transfer spot was swapped back and forth with Roger Nance [33] holding on to it for the final two laps.

Last year’s feature winner Brayden Pruitt [13] started on the pole for Heat 5 and seemed to pick up right where she left off. Daniel Coffey [99] finished second, and after a three car battle Travis Sharpe [T2] was able to pick up the third and final transfer spot.

And in the final Heat, lap one was quickly put under yellow for debris on the track. On the restart several cars were involved in an incident that sent cars spinning into the infield. When the race got underway Phillip Wilson [O4W] was able to lead the pack and win, with Jason Dickerson [12] finishing second. The third and final transfer spot went to Rod Tucker [8T].

Sixty-two Hornet stars, ranging from New York to Florida, took to The Dirt Track at Charlotte for three showstopping races.

The group of drivers were split into three 15-lap Features based on their qualifying laps and each race saw the drivers racing as though they were chasing a crown jewel win.

John Windham, of Lake City, FL, was the class of the field all night and put a period on that in the first VP Racing Fuels Hornet Feature of the night.

In the early stage of the day, Windham was the fastest in the first set of Hot Laps and then set Quick Time in Qualifying. That put him on the pole for the first Feature. Behind him were Payne Pickles and Eddie McGraw, who won at the World Short Track Championship last year.

To get it, he had to go through Donavan Beacham, of Shelby, NC, and Beacham did not make it easy on him. He took the early lead with Windham on his tail the entire time. The two drivers then put on a show worth the price of admission, with Beacham ultimately handing the win to Windham after hitting the wall in Turn 4.

In the third and final VP Racing Fuels Hornet Feature of the night, Joey Kelly became a World Short Track champion for the second year in a row. And he did it in dominant fashion by leading all 15-laps in a car he didn’t even have a week ago.