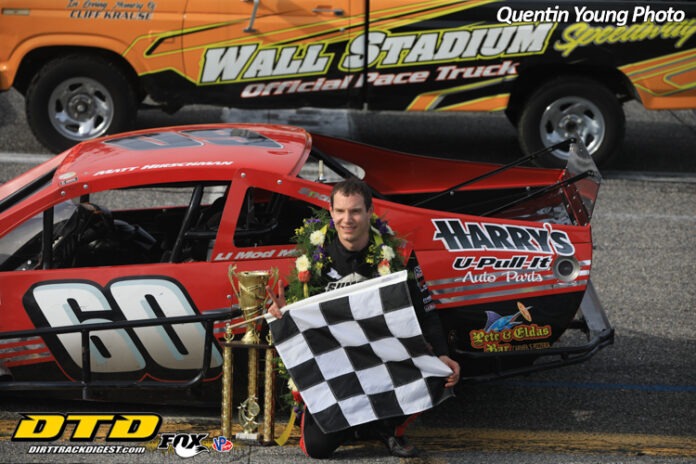 With car counts being unexpectedly low, the traditional 150-lap feature was transitioned to a twin-50 format. With the first feature lined up by time trials, Hirschman jumped out to an early lead, but Tommy Martino Jr. didn’t let Hirschman build up much of an advantage. Up until the first caution on lap 30, Hirschman rarely saw his gap eclipse the one-second mark.

Following a second yellow on lap 38, Andrew Krause snuck by Martino for second. Krause showed good pace late in the race, matching Hirschman, but not closing enough to reach Hirschman’s bumper. At the end of the first 50-lap segment, it was Hirschman winning over Krause, Martino, Timmy Solomito, and Ron Freese.

With the top eight re-drawing, Martino and Solomito started on the front row of the second 50-lap main. Hirschman jumped from fourth to third on the initial start, then sliding by Solomito for second on lap three. Krause got to fourth behind Solomito, with Martino leading a four-car train at the front of the field.

Hirschman tried and tried to get under Martino, but couldn’t get position until lap 28. A lap later, Hirschman was the leader, and Krause knew it was go-time. Up top, Krause went to third on lap 32, and then Krause went to the bottom for second on lap 36. Hirschman built up a one-second lead before Krause reached second position, but this lead slowly closed.

Krause got within a car length of Hirschman with five laps remaining, but lapped traffic loomed. Lapped cars didn’t play into the hands of Krause, and Hirschman was able to keep Krause just far enough away to avoid any last-minute swing at the win. With the checkered waiving, Hirschman scored the second 50-lap main over Krause, Martino, Solomito, and Anthony Sesley.

“Today was overall a pretty clean day,” Hirschman said. “Andrew (Krause) was definitely fast both races, I was real nervous at the end of that second one, but I just love coming here. Even years when I’m only able to get down here in November, the fans are just so good and it makes it so much fun to come down here. This race just doesn’t have the same atmosphere as Turkey Derby in November, but I hope when we get back here later this year we have the same speed that we do now.”