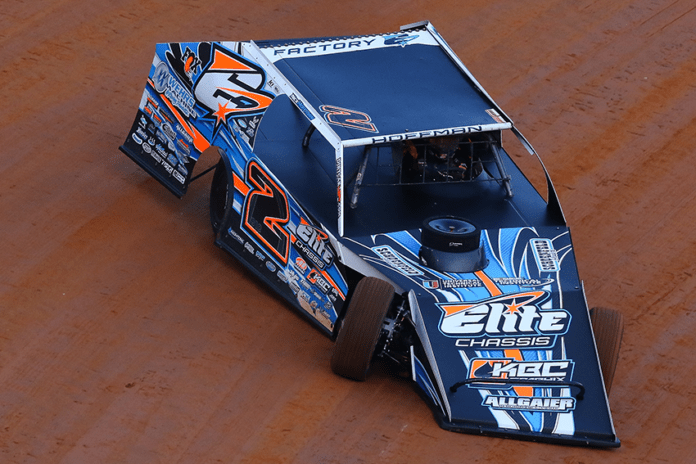 BRISTOL, TN – The DIRTcar UMP Modifieds have officially taken their first look at the dirt-covered Bristol Motor Speedway in preparation for this weekend’s inaugural World of Outlaws Bristol Bash.

The UMP Modifieds will compete this Friday and Saturday night, April 9-10, alongside the World of Outlaws Morton Buildings Late Model Series, with complete racing programs and a 20-lap Feature on both nights. $5,000 goes to Friday night’s winner while the big $10,000 grand prize goes home with the Feature winner on Saturday. Tickets are available online at BristolMotorSpeedway.com; DIRTVision presented by Drydene will have live race coverage throughout the weekend.

Hoffman, the two-time and defending DIRTcar UMP Modified national points champion, made his first laps around the half-mile and was amazed at the feeling in the seat, combining the straightaway speeds and high degree of banking.

“The straightaways are pretty long. I feel like you can take a drink and do whatever down the straightaways, and then you get to the corner and it’s elbows up,” Hoffman said.

Hoffman was one of nine drivers to log at least 20 laps over each of the six sessions. Overall, he considered it a solid night, but knows where he needs to make improvements for his first competitive night on Friday.

“The racecar’s really good; I’ve got a ton of grip. But I think I have too much grip for this place. I’m just too tight, gotta get better as far as steering,” Hoffman said.

For this special event, Hoffman has put together an equally special package for the racetrack. As the owner and founder of Elite Chassis, Hoffman restored the very first Elite frame he assembled during the 2012 season, strapped in a Chevrolet SB2 engine and brought it to Bristol. So far, so good.

“I felt like the car drove great from the beginning. No bugs, didn’t have anything stupid happen, motor ran great. No real issues, just gotta get it to turn a little bit better,” Hoffman said.

As a two-time national champion of the division, Hoffman has won at numerous tracks across the country, but only a select few compare in size and speed to Bristol. One track that immediately comes to Hoffman’s mind is the half-mile of Eldora Speedway, where he won back in 2012 on the very first night out driving his new Elite Chassis brand.

“Eldora’s pretty round and sweeping. It’s decently banked, but it isn’t like this. It’s pretty round and forgiving. Here, you’re going straight at such high speed and just running into that banking. That’s the biggest thing that’s so much different,” Hoffman said.

With those differences in speed and banking comes a big physical challenge in the cockpit – one which Hoffman doesn’t normally see during the regular season.

“Right now, it’s everything you can get,” he said. “I feel like I’m in pretty decent shape, I’m not going to fall out of the seat I don’t think, but it’s way more physically demanding than anywhere else we’ve gone.”

Hoffman says the keys to victory will be laying down a good lap in qualifying and getting out in clean air to control the race. He’s done exactly that many times before, and he’s confident he can do it again.

Don’t miss the DIRTcar UMP Modifieds in action at the Bristol Motor Speedway for the inaugural Bristol Bash this Friday at Saturday night, April 9-10. If you can’t make it to the track, catch every bit of racing live on DIRTVision presented by Drydene.