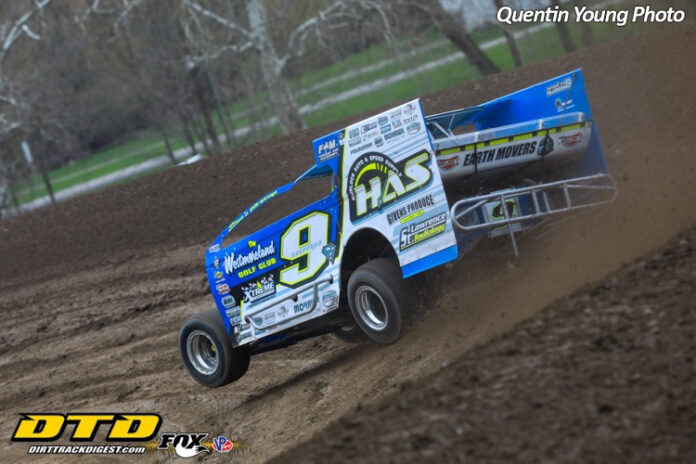 DUNDEE, NY – Super Matt Sheppard made his first appearance of the 2021 season at the Outlaw Speedway and the defending Friendly Chrysler, Dodge, Jeep, Ram Modified Track Champion wasted little time moving thru the field from his fifth row starting position taking the top spot away from then leader, Tyler Siri on lap eighteen. Cory Costa and Siri brought the field to the opening green as Boss Man Tyler Siri shot out into the opening lead which he would hold thru lap six. Brady Fultz then moved around to take over the top position which he would attain until lap fifteen when Siri would retake the lead on a restart.

However, Siri’s lead was short lived as Sheppard made an inside move pass to take the lead which he would hold throughout the remainder of the thirty- lap feature. The final caution flag on lap twenty-five gave track owner, Siri one last shot at Sheppard, but the three- time Outlaw Speedway Track Champion was just too much to handle on this night as he went on to the win. A disappointed Tyler Siri had to settle for second with Fultz holding off a late race rally by Doctor Danny Johnson to claim third at the double checkered flags. For the second straight week invader, Nick Nye ran with the lead pack the entire distance as he rounded out the top five finishers.

The Patriot Sprint Tour 360 Sprints made their first appearance of the 2021 season at Outlaw Speedway with Davey Franek coming away with the A Main win. For a concise wrap up of the entire night of action for the Patriot’s along with plenty of other valuable information including the complete 2021 schedule of events log onto their web site at www.patriotsprinttour.com.

Third generation driver and what many consider a rising star in the sport, Alex Payne continues to live up to all the hype surrounding his young career as he was on his A game this night sweeping both 602 Crate Sportsman twenty-five lap feature events.

In the opening feature of the night, which was the Speed Connection DIRTcar Hoosier Tire Sportsman event, Payne shot into a commanding lead from his outside front row starting position as he and Brett Buono would bring the twenty-four-car field to the opening green. Payne would go onto dominate the field in picking up his first feature win of the night as well as his first of what many railbirds consider several to come in 2021. Both Dalton Rombough, who lined up tenth and Andrew Buff in fourth were making rare appearances at Outlaw would grab a lot of the attention as Payne was well in command with Rombough finishing in the runner-up spot at the finish as Buff rounding out the final podium spot. Last weeks opening night feature winner and track regular, Ajay Potrzebowski Sr. along with Tommy Collins Jr. would both have steady drives to complete the top five finishers.

In the companion Sunrise Insulation American Racer Tire Sportsman twenty-five lap feature event it was a bit tougher for Alex Payne as he lined up seventh on the opening green flag. Asphalt transfer, Bryce Bailey would take off from his outside pole position to lead the first three laps before last years Track Champion, Karl Comfort would wrestle away the top spot which he would hold till Payne went storming by on lap nine. Numerous caution flags may have slowed the pace, but it was not going to slow Payne from getting out the broom and sweeping the night in what is a rare if not a first ever occurrence at Outlaw Speedway with the same driver winning both Sportsman Divisions since the classes were split in 2019 allowing drivers to compete in both highly competitive classes. At the finish Payne was followed across the line by Comfort and Bailey who completed the top three. Kaiden Dgien began the feature in fifth and advanced one position to nail down fourth while former Track Champion, Chris Fisher would complete the top five.

Glen Whritenour made short work of the Stan’s No Tubes twenty lap feature event in making it two wins in a row for the 2020 Track Champ. By the luck of the re-draw, GW started outside the front row as he along with veteran driver, Gene Sharpsteen brought the field to the opening green. In a non-stop feature Whritenour had a commanding lead at the finish as all eyes were on a fierce battle for the second spot with Gene Balmer coming across the line to nail the runner up position, his best finish in recent memory. Sharpsteen would settle for third at the finish with Jared Hill in fourth as Lanson Albanese would complete the top five.

The Winner’s Circle Deli 4 Cylinder Mini Stocks took their turn at bat and in a real thriller it was Kenneth Evans holding off a late race charge by Rob Williams to win his first feature of the new season. Evans, who started inside the third row was able to move into the lead early as Williams lined up in row four, advanced to second but had to look at the rear bumper of Evans throughout the twenty-lap distance. Dante Mancuso continues his impressive start to the 2021 season as he claimed third at the finish followed by Derrick Puryear who drifted back from his front row starting position but still claimed fourth at the end as Scott Lehman rounded the top five.

In the NAPA IMCA Hobby Stock Division, it was business as usual as the racing was as tight as a banjo string throughout the entire twenty lap distance. Last week it was total heartbreak for Justin Eldredge as he looked poised to win, but it was Marc Minutolo taking the opening night victory. This week the tables were turned as Eldredge was able to barely hold off Minutolo in a feature that was not decided until the last corner of the last lap with Minutolo trying every trick in the book but came up just a car length shy. Last seasons Track Champion, Wayne Ellison would lead lap one, however mechanical issues would take him out of the event on a lap two restart. Josh Oles would go onto lead from lap two thru eight when he slammed into a disabled lap machine that was trying to exit the track into the pit are in turns one and two. For Oles it was a real heartbreaker as not only did end any chance he had of winning the event, but his machine suffered extensive front-end damage. From there Eldredge inherited the lead and would go onto the win with Minutolo second. In a typical NAPA Hobby Stock blanket finish Jeremy Trank was able to claim third just nipping Josh Towner and Casey Wagner who took home fourth and fifth.

Congratulations to all competitors in the 1st Annual Cindy Lane Memorial Spring Nationals at Outlaw Speedway.

With two of the higher profile events of the season now officially into the record books at Outlaw Speedway, up next it will be the first point races of the 2021 season as the 1st Annual Roy Silvers Memorial will be run at the popular Yates County oval on Friday, April 30.

The Super 7 Show will consist of the Friendly Chrysler, Dodge, Jeep, Ram Modifieds as the Lane’s Yamaha 360 Sprints will make their first official start of the year. Also, on the card it will be the Sunrise Insulation American Racer and Speed Connection DIRTcar Hoosier Tire Sportsman Divisions as well as the Stan’s No Tubes Street Stocks, the NAPA IMCA Hobby Stocks along with the Winner’s Circle Deli 4 Cylinder Mini Stocks featuring a mix of front and rear wheel machines.

All gate times, admission prices and fan attendance protocol will be posted at www.facebooklcom/OutlawSpeedwayLLC/. The first green waves at 7:30 PM.

For a look at the 2021 schedule of events, rules, upcoming point standings and directions to the facility log on at www.outlawspeedwayllc.com.