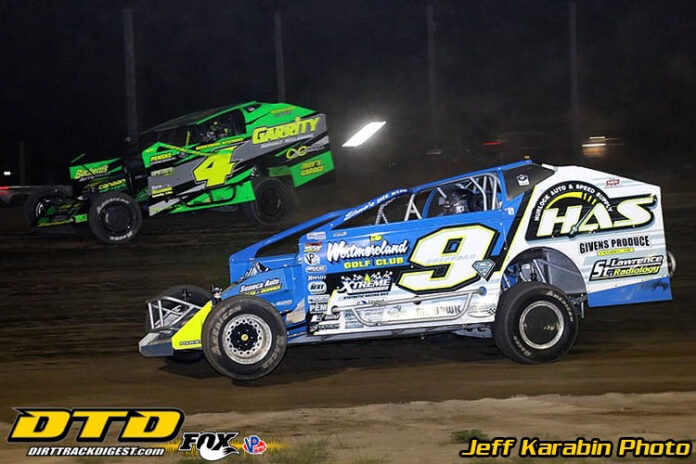 For the first time since 2018, Savannah, N.Y.’s Matt Sheppard returned to Victory Lane at Utica-Rome Speedway.

“It feels really good (being back in Victory Lane at Utica-Rome). I feel like we’ve been in the hunt every week and we just haven’t gotten to the front fast enough,” explained Sheppard following the thrilling, 30-lap Sunoco Modified feature.

Sheppard stalked Sheffield, Mass., native Andy Bachetti for much of the final 20 laps, before finally making the move coming the white flag to secure his 43rd career Modified win at the ‘Home of Heroes.’

Sheppard started the feature from the 10th position, with Sean Beardsley and Marshall Hurd leading the field to the opening green flag.

With Beardsley setting the early pace, Middlesex, N.Y.’s Alan Johnson was forced to pull off the racetrack on lap five, after climbing to the runner-up spot. Marshall Hurd, who inherited second, was under fire from both Bachetti and Sprakers, N.Y.’s Jessica Friesen.

Bachetti worked his way to second, and Sheppard had climbed into fourth before a lap-10 yellow for Glenville, N.Y.’s Brian Gleason slowing to a stop in the fourth turn reset the field.

When the field went back to green, Beardsley dropped off the top of turns three and four banking before coming to a stop.

With 18 laps remaining when the field went back to racing, Bachetti had Matt Sheppard alongside of him, and Johnstown, N.Y.’s Rocky Warner had entered the picture, racing to third.

Sheppard paced Bachetti, working the bottom side while Bachetti continued to rip the topside of the half-mile oval.

With 10 laps to go, the leaders began working in lap traffic, but Bachetti continued to be flawless. Sheppard’s chase continued until two laps to go, when lapped cars side-by-side threw the curveball that Sheppard was looking for.

Jim Walsh moved to the top right in front of Bachetti, and Sheppard filled the hole on the bottom. Bachetti tried to move to the bottom, but Sheppard beat him to the spot.

Sheppard led the final two laps, getting past his three runner-up finishes to open the season, and grabbing the elusive win.

“It was a great race. It seemed like every time I showed him a nose, he’d pick his pace up,” a happy Sheppard conveyed in victory lane.

Bachetti held on for second in his Garrity Asphalt No. 4. Rocky Warner grabbed third in his Jason Simmons Racing No. 98. Jessica Friesen finished fourth in her family-owned no. 1z, and Covington Township, Pa.’s Alex Yankowski rounded out the top-five. Yankowski started 12th in his Utica-Rome debut

The win netted Janczuk $1,500, with the Crate 602 Sportsman racing for an increased purse on Friday night.

Dolgeville, N.Y.’s Dave Richer came home with his best finish of the season, grabbing the runner-up spot. Johnstown, N.Y.’s Brian Calabrese came all the way from 18th to round out the podium.

On the white flag lap, the went side-by-side into turn one, and the lap car of Jerry Streeter spun out, and collected Stone who was running the bottom.

Ballard would hold on for the win in the one-lap dash, with Jason Morrison and Jim Normoyle rounding out the podium finishers. Morrison was later disqualified in post-race tech.

Justin Pope moved his win total to three in three tries, claiming the Cool Stuff Antiques Four Cylinders feature event. Ken Hollenbeck, who made his first appearance at Utica-Rome in 2021, was the Single Overhead Cam winner.

The Mohawk Valley Vintage Dirt Modified Series was on hand for their first appearance of 2021 at the Route 5-oval. Randy Delaney was the Modified winner of for the Vintage cars.

Stephen Denton picked up the Sportsman division victory, and Loren Lincoln was triumphant in the Antique Vintage division.

Racing resumes Friday, June 18, for the ‘School’s Out Special.’ The Sunoco Modifieds will race for $3,500-to-win to headline the event. Joining the modifieds will be the Worthington Industries Crate 602 Sportsman, Next Generation Graphix Pro Stocks, Fastline Performance Limited Sportsman, and the Cool Stuff Antiques Four Cylinders.

The Speedway Entertainment Slingshot Tour will be on hand as well on the inner oval.

Did Not Start: John Baker