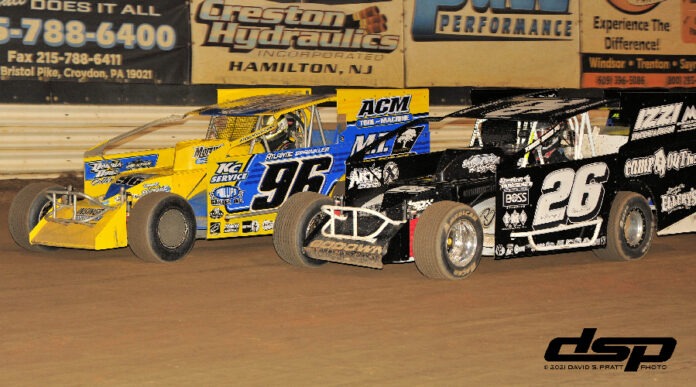 “Ryan (Godown) and I had a great battle there for the fans,” exclaimed Pauch Jr. in victory lane, “We raced very close on all grooves of the track for many laps, and never touched once. That was a lot of fun!”

Matt Stangle and DJ Hunt would bring the field to the start of the 60 lap event with Stangle putting his Danny Sommeling Motorsports #51 into the early lead. Stangle was fast in his new ride and opened up a nice lead as Wade Hendrickson, Danny Bouc and John McClelland battled with Hunt for the second position. It did not take long for 7th starter Ryan Godown to quickly move into the mix, and soon he won the battle for second and set his sights on the Stangle. As he ran down the leader, Pauch Jr., who started 11th, was quickly on his heels as a caution flag reset the field. The restart saw Stangle fight hard to hold on to the lead, but Godown finally wore him down and got around him to take the lead, bringing a very fast Pauch Jr. with him. PAuch Jr. quickly caught Godown, but then could only match the speed of Godown, as they both raised their game and put on a crowd pleasing side by side battle each lap and thru several restarts. David Van Horn, who had fallen back early in the event, had now moved to third after battling with Stangle and was looking to make it a three car race. Godown and Pauch Jr. battled side by side thru turns lap after lap with Godown’s momentum taking back out front each lap. The two swapped grooves as well a couple times, and finally, as the crossed flags were being displayed to the duo, Pauch roared into the lead. At this point, point leader Mike Gular was in 4th and really working well in the bottom groove, despite a broken sail panel that had been dangling since lap 5. Gular continued to move up until he was second, and would challenge Pauch on the last two restarts only to watch him pull away each time. Pauch Jr. would win the event by 1.795 seconds over Gular to score the 32nd Modified win of his career at NES. Godown came on strong again during the closing laps but settled for third, chased by Van Horn and Stangle. Sixth thru tenth went to Bouc, Hendrickson, Rick Laubach, Brandon Grosso and first year Modified competitor DJ Hunt.

Justin Grosso won for the fifth straight time in the Racersguide.com Crate Modified 30 lap feature. Grosso needed the extended laps of this raced to pull it off this time as he didn’t gain the lead from Anthony Tramontana until the closing laps. Tramontana finished second followed by Paul Mancini, Ryan Godown Jr. and Jordan Cox.

The John Blewett, Inc. 4-cylinder 15 lap feature was won by Mike Fox. It was Fox’s first win of 2021, as he held off Dom Antonelli and Rich Page for the hard earned victory. Co-champs last year Joe Garey Sr. and Justin Dun rounded out the top five.


This Saturday night June 26th it is Graduation Night at New Egypt Speedway. All 2021 graduates with a copy of their diploma will receive free general admission. The Vahlco Wheels Modifieds will be joined by the Mid-Atlantic Sprint Series 305 sprint cars. The night will kick off with the final Lyons Construction/MetalFab Rookie Sportsman event, as the Rookies will graduate and we will crown the 2021 Rookie Champion. The Racersguide.com Crate Modifieds, John Blewett Inc. 4-Cylinders, & Street Stocks will fill out the card. Gates will open at 5pm, with warm-ups at 6pm and the first race taking the green at 7pm.