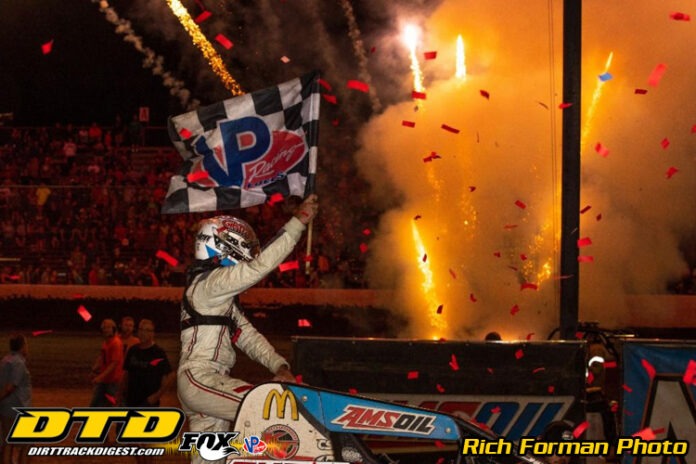 HAUBSTADT, IN – It wasn’t all that long ago that Kevin Thomas Jr. considered himself lapped traffic at Tri-State Speedway.

Three years removed from his last moment of exuberance at the Haubstadt, Indiana quarter mile, the all-time leader in Haubstadt Hustler victories was back on top with his fourth career win in the 14th edition of the 40-lap event on Saturday night.

The 2013, 2017, 2018 and 2021 Haubstadt Hustler winner rose to the lead on lap 18 where he took advantage of a fortuitous opportunity in traffic when the two frontrunners collided. Thomas then led the final 23 circuits to become $12,000 richer in the event co-sanctioned by the USAC AMSOIL Sprint Car National Championship and the Midwest Sprint Car Series.

In the ensuing years after his most recent Tri-State Speedway win, the Cullman, Alabama driver’s USAC results at the track were unfathomable considering he now stands ahead of Daron Clayton and is now tied with Kyle Cummins as the winningest USAC Sprint Car driver at TSS with six scores in his career.

In five USAC starts between 2019-2020, Thomas finished better than 14th just once. In 2021, however, his program has taken a turn for the better with a 7th in April; 2nd in July; and capped it off with a victory on Saturday in his KT Motorsports/Dr. Pepper Presents the Ronald McDonald House Charities/DRC/Speedway Chevy.

“I was lapped traffic here for two years,” Thomas reflected. “I veered away from the normal things we did, so we just went back to the drawing board, figured some things out and went back to our normal package. We just gave it everything we’ve got, and it worked out. It’s been a work in progress for the last couple years to get back to our normal form here. I think after a few times being here and running on the podium and having good races, 40 laps is what we needed.”

Thomas’ 34th career USAC National Sprint Car feature victory places him just one behind Jon Stanbrough and Rich Vogler for 11th on the all-time series win list, four of which have now come in the lucrative Haubstadt Hustler.

“It’s pretty cool,” Thomas said of his Tri-State success. “There’s a lot of people that are really good here who’ve been doing it a long time. Cummins being one of them, Clayton being the other. They’re showmen around this place, so it’s good to be in the same category as them.”

Thomas’ seventh series win of the year has already equaled his most successful USAC National Sprint Car season in terms of feature victories after also winning seven in 2013 and 2018. And it all came after having to make some alterations to his ride to get it prepared to go the distance.

“It’s been a bit of an up and down night,” Thomas said. “I had to change a rear end earlier today. I haven’t won at Haubstadt in what seems like forever, so it’s fun to come back and win the Haubstadt Hustler again. It was a good showing for us and I’m super happy for our guys.”

Thomas started fourth and remained in the position for the first 12 laps while pole sitter and 2015 Haubstadt Hustler winner Brady Short led the opening lap, which were his first laps led in a USAC National Sprint Car feature since winning the Indiana Sprint Week round at Lincoln Park Speedway more than five years earlier in July of 2016.

Short’s initial run at the front was short lived, however, as he slid straight up the track on his entry in turn one on the second lap, allowing the defending Haubstadt Hustler winner, Chase Stockon, a wide-open shot underneath to claim the top spot.

Short kept in close touch with Stockon, not allowing the 2021 MSCS titlist to construct a profound chasm between himself and his challengers. Short was the teeter to Stockon’s totter, and on lap seven, it was Short’s turn to repossess control of the race lead when he used the bottom side to charge past Stockon at the exit of turn four.

Subsequently constructing a 1.4 second lead, Short held control as July Tri-State USAC Sprint winner Justin Grant slotted into second. On lap 16, Grant chiseled a full second off Short’s advantage as Short skidded up the surface in turn four while trying to wade his way through the backend of the field.

Push came to shove on the 18th lap in turn four when the 21st running car of Max Adams became sideways at the exit of turn four. The nose of Adams’ car contacted the passing car of Short, which ricocheted him into Grant, knocking both airborne and askew, clearing a path for both Thomas and Cummins to race by on the outside and take over the top two spots.

“Early in the race, it gets a little tight whenever we get around lapped cars just because the track is still a little narrow,” Thomas explained. “It’s 40 laps, so they have to do that in order for us to have a good race there at the end. It’s just unfortunate for (Short and Grant) because they were really fast. I don’t really think I would’ve had a whole lot for them.”

In pursuit of Thomas for the next 16 successive laps, Cummins’ bid for a third career Haubstadt Hustler crown ended on lap 34. Cindy Chambers, running 22nd, and another car made contact between turns three and four, knocking out the front end of Chambers machine as it veered straight into the path of Cummins who ramped over her left rear tire, performed a 180-degree spin, and came to a stop after bouncing his left rear tire against the outside turn four wall.

From there on out, for the final seven lap stretch, Thomas was unrattled as he whisked away from the field virtually unchallenged to grab the checkered flag by a 2.216 second margin over Justin Grant, Brady Bacon, Tanner Thorson and Chase Stockon.

Justin Grant’s prowess in USAC National Sprint Car competition at Tri-State has been solid this year with the Ione, California driver earning a 4th in the spring, followed by a win in July and a runner-up finish on Saturday in his TOPP Motorsports/NOS Energy Drink – MPV Express – TOPP Industries/Maxim/Kistler Chevy. His previous best finish in the Haubstadt Hustler came in a sixth-place performance in 2020.

“I think we’re finally getting it figured out,” Grant said of his recent performances at Tri-State. “I didn’t want to think that last time in case it was just a fluke. The guys gave me a great car again. We were pretty good tonight, but we were maybe a little bit too good, too early and it got loose at the end. So, we’ll note it and try to come back stronger for the next 40-lapper.”

“We’re usually good here in the feature,” Bacon said. “We just struggled at getting a decent starting spot. I could at least see the front tonight and we were able to get to third. The track had a little more grip to start with than we’re used to here, so it kind of threw us off a little bit. Every time we think we’re getting something figured out, it throws us a little curveball. But, usually in the feature, everything gets back to normal and we’re pretty good.”