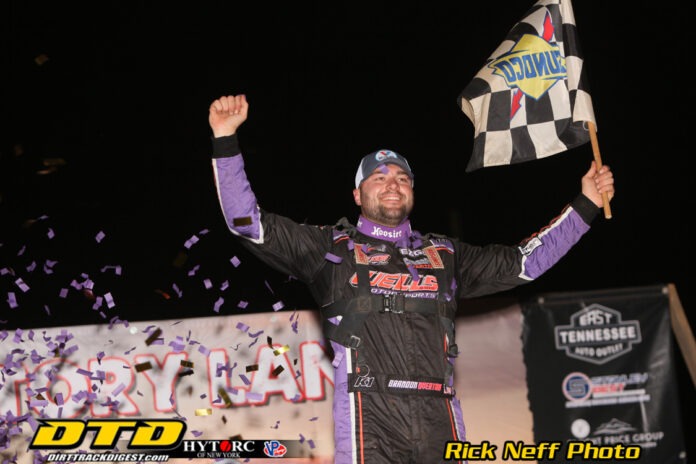 SWAINSBORO, GA – The driver of the year in Super Late Model racing in 2021 is back at it again early in the 2022 campaign, as Brandon Overton racked up a commanding flag-to-flag victory tonight in the Schaeffer’s Oil Spring Nationals Series lid lifter at Swainsboro Raceway! Brandon was quick right out of the box, as he steered his #76 Longhorn Chassis to the fastest time in FK Rod Ends qualifying before securing a dominating heat race triumph. The Evans, Georgia standout then started the 53-lap headliner from the pole position and kept his machine out front each circuit during the miniseries’ first-ever race at the Swainsboro, Georgia facility to bag the $10,053 payday.

After starting the feature from the outside of the second row, Michael Page quickly moved up to the second spot and finished in the runner-up position – 2.828 seconds behind winner Overton at the unfurling of the checkered flag. Floridian Mark Whitener picked off eight competitors during the course of the contest to land on the podium in third. Dalton Cook came home in the fourth spot, while Ashton Winger drove past a handful of racecars during the 53-lapper to round out the list of top five finishers.

Four yellow flags slowed the heated action around the Paul Purvis-owned Georgia oval during the main event. Jensen Ford went for a spin on lap four prior to rebounding from the tail to salvage an eighth place performance. Ryan Rackley then looped his ride on lap eight to draw another caution before top five running Payton Freeman experienced the same fate on lap 22 following contact from another competitor. Outside polesitter Pearson Lee Williams was then battling for a podium effort when mechanical gremlins caused him to retire from the event on lap 29 and relegated him to the eighteenth finishing position.

“I was just joking with (series promoter) Ray Cook here in victory lane that I wish I could make this thing drive like that all the time,” quoted Overton after picking up his fifth career Schaeffer’s Oil Spring Nationals Series victory. “It is cool to be back here at Swainsboro. I cut my teeth racing around here and this place was so slick tonight – hats off to Paul and everyone here at the track. All of my family is here tonight watching and I can’t thank them enough for all of their support along with the long line of sponsors on this car!”

Round two of the Schaeffer’s Oil Spring Nationals Series journey will take competitors 163 miles to the northwest overnight for Saturday’s $10,053 to win showdown at Senoia Raceway in Senoia, Georgia. The March 5 visit to Senoia will mark the eighth series race on the gray gumbo and the winner’s list reads as a virtual “who’s who” in the sport of Dirt Late Model racing. Jonathan Davenport (’16), Chris Madden (’16), Michael Page (’17), Donald McIntosh (’17), Scott Bloomquist (’18), Dale McDowell (’18), and Chris Madden (’19) have all reached Spring Nationals victory lane at the track now owned by the Pollard family.

At Senoia on Saturday, March 5, the pit gates will swing wide open at 2:30pm and the grandstands will then open at 5:00pm. The drivers meeting is also scheduled for 5:00pm with hot laps heating up the racetrack starting at 5:30pm. Adult admission into the grandstand will be $30.00, while kids ages 12 and under will be admitted onto the grounds for FREE. Pit admission for adults will be $40.00 with kids ages 6-12 admitted for only $20.00. Young children ages 5 and under will be allowed into the pit area for FREE.

Along with the Schaeffer’s Oil Spring Nationals Series, Saturday’s program at Senoia will also feature the following divisions: Hot Shots, Bombers, Modifieds, 602 Late Models, 602 Chargers, and 604 Late Models. Senoia Raceway is located at 171 Brown Road in Senoia, Georgia. If you can’t make it to the track, we invite you to watch all of the action LIVE on www.FloRacing.com. For additional information, please call the track at 770-599-6161 or log onto their official website at www.SenoiaRaceway1969.com.