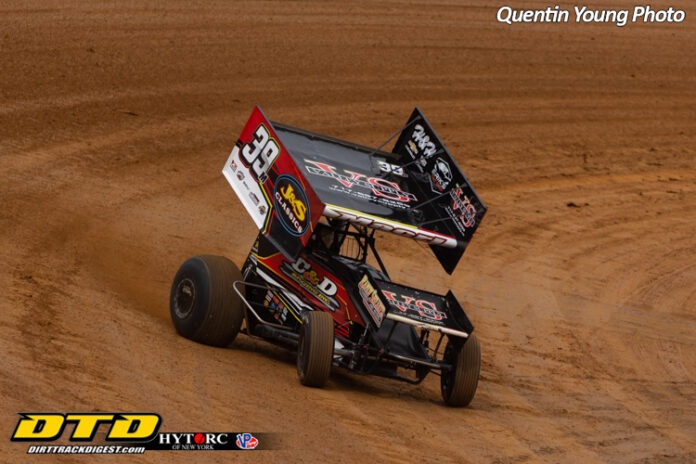 The win was Macri’s 12th career triumph at the Juniata County oval and moved him into a tie for 31st on the career win list at the Speedway with Bobby Davis Jr., Bobby Weaver, Marks, Don Kreitz Jr. and Lucas Wolfe.

“I can’t thank all my guys enough. They busted their butts all night and every one of them stayed in the shop until 3a.m to be here and ready,” said Macri. “I didn’t really think we were the best early and I just kind of had to stay with it and keep working with the wing.”

Marks and Pat Cannon led the field of 25 Sprint Cars to the green flag, but racing activity was halted before a lap was completed when third-place starter Jeff Halligan got sideways in turn one and collected TJ Stutts, Curt Stroup and Zach Newlin. Newlin got upside down to bring out the red flag, but walked away safely.

When the field went back to green flag action it was Marks jumping out to the early lead with Macri, who started fifth, moving into the runner-up position over Cannon, Gerard McIntyre and Logan Wagner.

Wagner, who started the race from the eighth position, was the car on the move early as he moved into fourth on lap two and advanced to a podium position the following lap. Three laps later though the caution flew for debris.

Marks again pulled away from the field on the restart, but it appeared he’d soon have a challenger in Wagner as the defending four-time champion slid under Macri for the runner-up position exiting out of turn four. However, Macri and Wagner made slight contact, which sent Wagner spinning toward the frontstretch inside guardrail to bring out the caution with 18 laps to go. After a brief stop in the pits, Wagner rejoined the field.

Marks took off on the restart with Macri in tow, while McIntyre was making his presence felt as he got by Cannon for the third spot with eight laps completed. Ninth-place starter Lucas Wolfe moved into the fourth position one lap later as well.

Wagner’s night went from bad to worse with 14 laps to go as he was making his way back through the field and made contact with Justin Whittall and got upside down in between turn’s one and two. Wagner walked away from the scene unharmed and briefly had an altercation with Macri, who was parked at the entry of turn one as a result of the red flag, to bring the frontstetch fans to a roar.

Following the final restart of the event, it was 17th-place starter Danny Dietrich that was making waves. While the front trio of cars stayed unchanged over the next several laps, Dietrich moved into the top five with 10 laps to go and then got to fourth with eight laps remaining.

With five laps remaining, the leaders were approaching lapped traffic. Macri got a run down the backstretch and slid under Marks entering turn three. He was able to make the move stick and while Marks tried to cross back under him coming to the flagstand, it was Macri in first by a nose with four laps to go.

Marks tried to execute a slide-job on Macri to get the lead back in turn’s one and two, but Macri was too strong on the top of the Speedway. From there it was the battle for second that everyone was watching.

McIntyre closed in on Marks and attempted to take the position, but Marks was able to hold him off. Dietrich was closing in on a podium spot as well, but ultimately ran out of laps.

Dietrich was the night’s $500 Valley Supply Hard Charger after gaining 13 positions, while Cisney earned the $1000 J&S Classics Warrior Award via the random draw of the No. 9.

“We definitely didn’t have the car to win early in the race, but after that open red we made the right adjustments and it paid off,” said Macri. “It’s been a good start to the season for us. I joked with the guys that this track might be NASCAR racing with all the laps we’d have on it, but this is the Port Royal everyone loves and the track was great to run on.”

For Marks, the second-place finish was a sting after leading most the event.

“I felt like I was good enough to win the race and that open red really allowed everyone to get better,” said Marks. “We had a good car and we just kind of fell off there at the end. I was trying to just hold my own and run my race, but overall it just stinks to come up one spot short.”

Colton Flinner capitalized on a pole position starting spot to pick up his second consecutive victory at the Port Royal Speedway in the Krill Recycling, LLC Super Late Model division.

The win was worth $3500 and was Flinner’s first career ULMS Racing Series sanctioned victory.

“This car is badass and a lot of my friends back home said I only won on Opening Day because there wasn’t any competition here,” said Flinner. “The car has just been really good and this win means a lot to me.”

The start of the 30-lap feature was delayed twice after sixth-place starter Jason Covert got into the outside guardrail in turn one to bring out the caution and then a multi-car wreck occurred at the flagstand on the second attempt..

However, the third time was the charm and it was Flinner and Jacob Hawkins leading them to the start. Flinner jumped out to the advantage, while third-place starter Gregg Satterlee moved into the runner-up position as well. Fifth starter Rick Eckert moved into a podium spot one lap later as well.

Flinner and Satterlee broke away from the rest of the pack and on lap six, Satterlee made his first attempt at the lead as he peeked under the leader in turn’s one and two only for Flinner to shut the door on the backstretch.

The two cars raced nose to tail for the next few laps, with Flinner moving from the top to the bottom and Satterlee moving to the top. Lapped traffic reared it’s head on lap 10 and the battle for first became a chess match of who could make the best move,

Meanwhile, Michael Norris had gotten by Eckert for a podium position and seventh-place starter Jared Miley was knocking on his door for the spot in fourth.

At the halfway mark, no lapped cars separated the leaders, but Flinner held a 1.2 second advantage on Satterlee. With 12 laps remaining, Flinner approached the lapped car of Kyle Lee exiting turn two and he bobbled slightly, which allowed Satterlee to close rapidly and he pulled alongside of the leader down the backstretch.

However, Flinner threaded the needle between both Lee and Satterlee in turn’s three and four to give himself some breathing room again and kept the runner-up at bay.

Miley moved into the third position, but it was all Flinner and Satterlee up front, With six laps to go, lapped traffic proved to be the key as Flinner had opened up more than a 2.0 second advantage over Satterlee, who was struggling to dispatch of the lappers.

From there it was smooth sailing for Flinner as he cruised on to the victory by more than 5.0 seconds over Satterlee, Miley, Norris and Eckert. Gary Stuhler, Tylor Emory, Hawkins and Mike Lupfer rounded out the top ten. Jeff Rine finished 12th to earn the Georges Used Cars $200 Hard Charger after starting 20th.

“I consider Gregg Satterlee to be among one of the best talents regionally and nationally and I appreciate that I get to call him a friend and competitor,” said Flinner. “I saw him poke his nose there a few times and I knew I needed to adjust and get going. It means a lot to beat him and hopefully it’s not the last time either.”