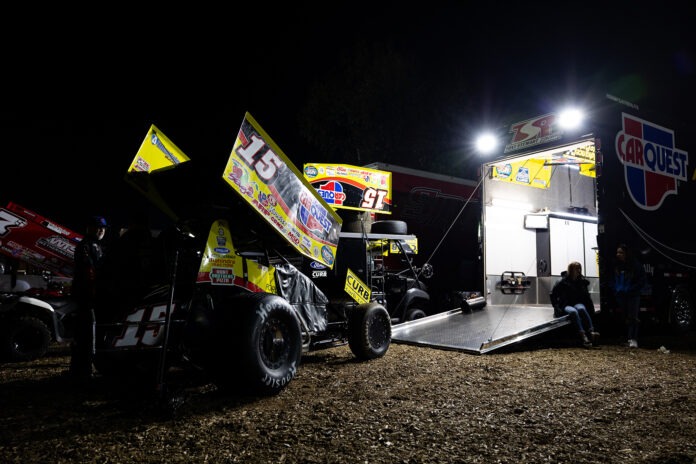 VADO, NM – The World of Outlaws NOS Energy Drink Sprint Cars have a long way to go, and a short time to get there.

Following the conclusion of the California swing this weekend, The Greatest Show on Dirt has a 10-hour haul to find the first-midweek show of the year, and then another 10-hour drive from there to hit the weekend destination as April begins.

It’s a three-race trip through three states over five days with some historical significance along the way.

Included in next week’s schedule is the debut of New Mexico’s Vado Speedway Park on Tuesday, March 29, the Series’ only visit to Oklahoma at Lawton Speedway on Friday, April 1, and a $20,000 payday in the DuraMAX/Drydene Texas Outlaw Nationals at Devil’s Bowl Speedway on Saturday, April 2.

Leading the charge into the week is current championship leader David Gravel aboard the Big Game Motorsports #2. The Watertown, CT native is enjoying the spoils of controlling the points for the first time in his career thanks to a stellar start to 2022 with one win and six top-fives through the opening eight races. The 29-year-old star will be going for his first win at both Lawton and Devil’s Bowl, and particularly loves visiting new venues like Vado.

“I think it’s great for our Series and our sport to venture out and give these new places a chance,” Gravel said. “Especially when it comes to a place like Vado, I think everything we’ve seen has shown this is a state-of-the-art facility we’re heading into. I’m excited to meet a bunch of new fans and keep the momentum rolling with our team.”

The beauty of a brand new track means the best Sprint Car drivers and teams in the world will be unloading at Vado with a clean sheet and no notes to reference. However, it’s not entirely new to 10-time Series champion Donny Schatz. The Tony Stewart/Curb-Agajanian Racing driver has competed at the Vado 3/8-mile in his dirt late model but has yet to rip around the joint in his Ford Performance, Carquest #15.

Schatz, along with Gravel, will be eyeing his first win at Lawton Speedway when the Series visits the Sooner State for the first and only time in 2022 on Friday, April 1. Lemoore, CA native Carson Macedo, who has already recorded two wins this year with Jason Johnson Racing, enters as the defending winner at the Oklahoma oval.

That Friday night April Fools showdown will mark the only home state race for Kevin Gobrecht Rookie of the Year contender, Noah Gass. The Mounds, OK 18-year-old has continued to commit to the Series’ steep learning curve and could potentially use his run back home as a momentum booster to his first-career top-10 finish.

“You know Lawton is still kind of unfamiliar territory being three hours from my house, but it will still be nice to be back in Oklahoma and around friends and family again,” Gass said. “It’s been a tough, but rewarding season so far. There’s nothing easy about racing at new tracks every night all while going against the best Sprint Car drivers in the world.”

On Saturday, April 2, the World of Outlaws awaits a $20,000-to-win showdown at the DurMAX/Drydene Texas Outlaw Nationals. It’s a homecoming of sorts at Devil’s Bowl Speedway, the site of the first-ever race in Series history on March 18, 1978. Donny Schatz and Brad Sweet are both former winners in Mesquite, TX, but one man in specific has ruled the 1/2-mile of late.

Logan Schuchart of Hanover, PA enters with three consecutive wins at Devil’s Bowl aboard the Shark Racing, DuraMAX, Drydene #1S. The 30-time World of Outlaws winner will pass his grandfather Bobby Allen on the All-Time Win List with his next victory and still has Sammy Swindell’s Devil’s Bowl record of five-straight wins within sight.

“There’s just something magical about that place,” Schuchart spoke on Devil’s Bowl. “I really appreciate the history of our sport and Devil’s Bowl is kind of like hallowed grounds to me when you think of the first-ever World of Outlaws race. We’ve really hit our stride there and hopefully can keep that streak going next week. Every race is important, but you always feel a little extra motivation when you see more money on the line.”

Other full-time Outlaws to watch next week include Sheldon Haudenschild in the Stenhouse Jr. Marshall Racing #17, James McFadden in the Roth Motorsports #83, and Spencer Bayston in the CJB Motorsports #5, among others.