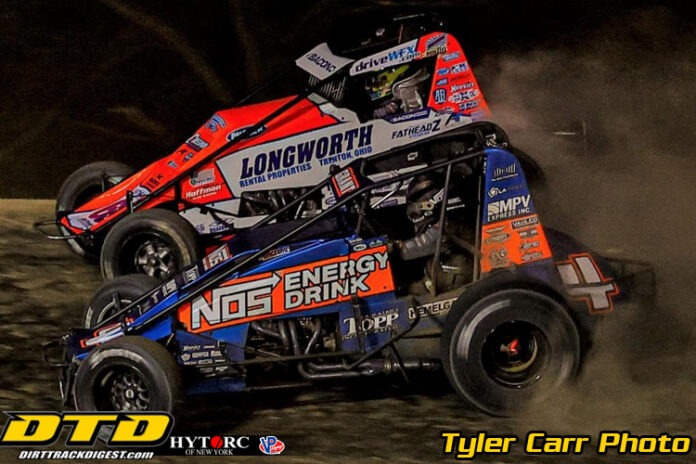 CHILLICOTHE, OH – Following a season in which he only finished outside the top-ten on two occasions, Brady Bacon opened his defense of the USAC AMSOIL Sprint Car National Championship with a pair of 15th and 16th place results.

But that was the story of February, a prelude of sorts to the grind that is the bulk of the season. Now, this is April, the beginning of the “regular season” that the Broken Arrow, Okla. native excels at practically without exception on an annual basis.

That was then; this is now. That’s old news, and this was the kind of performance Bacon can finally hang his hat on early in this young season.

Bacon did the job by thwarting several advances from both Justin Grant and Robert Ballou throughout the 30-lap slider fest to complete his 40th career USAC National Sprint Car feature victory on Saturday night at Ohio’s Atomic Speedway, tying himself with Gary Bettenhausen for eighth on the all-time list.

“We’ve had a disappointing year so far despite having really fast cars,” Bacon relayed. “I’ll take it to get the regular season started here. It’s been a long spring. We’ve been ready to get back racing, making money and selling some t-shirts.”

The four-time series champ repelled the challenge of traffic away with his left hand while figuratively casting aside repeated attacks to his throne at the forefront, most notably from Grant who drew closer and closer with repeated bids for the lead down the stretch to put himself in USAC National Sprint Car victory lane for the 12th consecutive season, and now trails only Sheldon Kinser’s run of 13-straight years with at least one series win between 1974-1986.

“We were coming up on lapped traffic and, if you broke your momentum, you lost a lot of time,” Bacon explained. “To be able to get into the corner hard and keep your momentum up without spinning your tires was huge. I caught a couple lapped cars wrong and I’m sure (Grant) did too, but it was tough.”

Bacon and his Dynamics, Inc./Fatheadz Eyewear – Gressman Sanitation – DriveWFX.com – Tel-Star/Triple X/Rider Chevy started on the pole for the 30-lap event, which marked the series’ first feature at Atomic Speedway since 1994, and the first visit to the 3/8-mile dirt oval since the rain-abbreviated racing program in 2010.

While Bacon got the edge on the initial start, it was fourth-starting Ballou who made waves with a big maneuver around the edge of the earth on the steep bank of turn two to travel to second by both Grant and point leader Emerson Axsom before diving low into turn three to go wheel-to-wheel with Bacon for the lead. However, Ballou’s work was all for naught as 18th running Austin Graby stopped backwards at the top of turn two with a broken rear end, ending his USAC National Sprint Car debut before it really began.

On the complete restart, front row starters Bacon and Axsom held serve to run one-two as they completed the first circuit with Grant and Ballou giving chase in third and fourth. By lap three, Grant dove to the bottom of turn one, and slid up in front of Axsom by the time the duo reached turn two. Immediately after, Axsom quickly fell back, from second to fifth, as a result of a rapidly deflating left rear tire as both Ballou and C.J. Leary slipped by to occupy third and fourth, respectively.

Axsom caught a small break when 15th running Brandon Mattox slowed to a stop on the front straightaway, bringing out the yellow flag, which allowed Axsom to stop in the work area for fresh rubber. He’d return and rejoin the tail of the field for the restart, then salvaged his evening with a ninth-place finish, which kept him atop the series point standings heading out of Atomic.

On the ensuing lap five restart, Ballou went right for the jugular with an absolute monster of a slide job in turn three. He and Grant came within inches of contact, but Grant kept his foot on the throttle and kept on keepin’ on in the runner-up spot while Ballou lost ground but recalibrated and reloaded while remaining in third.

Meanwhile, Bacon worked heavy traffic at the halfway point, and promptly saw his lead dwindle from two seconds down to a car length within a two-lap span as Grant closed right to the bumper of Bacon. A high speed chess match commenced as Grant repeatedly attempted to slide Bacon for the lead lap-after-lap to no avail, even getting completely sideways after briefly passing Bacon in turn two with 10 laps to go, which allowed Bacon to cut back underneath and resume his stance at the front with Grant and Ballou now in complete lockstep just behind.

Grant’s pursuit of a second series victory in 2022 paused when his left rear tire gave away at the exit of turn four with eight laps remaining. Bacon now found Ballou right on his tail tank for the lap 23 restart, but it was of no hindrance to Bacon who mastered the restart and instantly shot away at the drop of the green and never relented, building up a 2.514 second gap by the time the checkered flag fell, with Ballou slotting into second, Leary third, Chase Stockon fourth and Kyle Cummins fifth.

Ballou’s tumultuous day finished much better than it started. En route to the track, a flat steer tire on the Rocklin, California native’s trailer put him on the side of the road. After making repairs, he arrived at the track just in time for the driver’s meeting, then found his generator to be broken. Living up to his nickname, Ballou steered from sixth to first to win his heat race, which earned him a $100 bonus as the recipient of the GSP Quality Driving Performance, then recorded a strong runner-up finish in the feature aboard his Ballou Motorsports/Suburban Subaru – Dragonfly Aviation – Berks Western Telecom/Triple X/Ott Chevy, just one spot short of his first series victory since last June.

“I’ve just got to get my racecar a little bit better,” Ballou admitted. “We’re trying to find a balancing act with (crew chief) Derrick (Bye) back and trying to find our groove. Once we get about 10 more races into it, hopefully we can get this car up front. I’m really pushing hard but I’ve had a lot of setbacks here lately. It’s nothing to hang our heads about but we definitely had nothing for the 69 tonight. We’ve got to sharpen our pencil a little bit and I’ve got to do a better job racing.”

Leary (Greenfield, Ind.) put himself back on the podium with a third place result, emerging ahead in a ferocious late-race duel with Stockon for the position. After a best finish of 12th during his first three outings of the USAC season in Ocala, Leary returned to a bit of normality, driving his Michael Motorsports/Kodiak Products – Gray Auto – Highsmith Guns – DMI/DRC/Cressman Ford to its best result of the season. That all came after setting a new track record in Fatheadz Qualifying, which erased Dave Darland’s former mark from 2010 by nearly nine tenths, while also winning his heat from the sixth starting spot.

“Chase (Stockon) and I went back-and-forth, and he passed me on that original restart there,” Leary recalled. “I felt like they were just a little bit better than us at one point, then we were like the same speed. Overall, we were good all night. We’ve been fast all year and I think we’ve got a good package moving forward, so I’m pleased.”