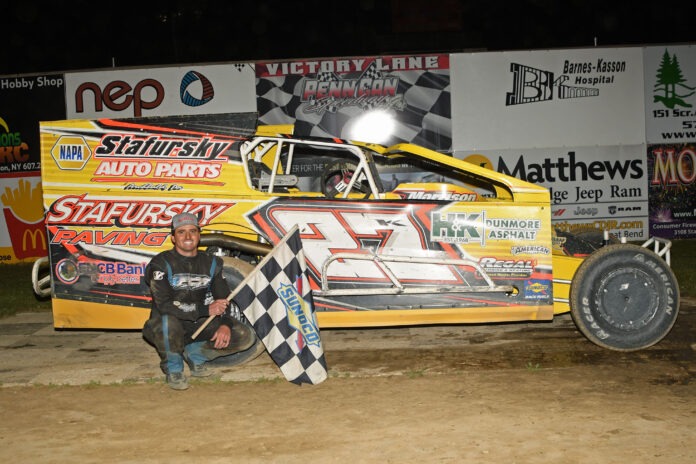 SUSQUEHANNA, PA – Brett Tonkin led the way as the Stafursky Paving teammates secured a 1-2 finish in the modified feature Friday night. It’s the third win for Tonkin this season and fourth for the Stafursky team as Dan Vauter made his Victory Lane trip last weekend. With a growing weekly field that featured 21 cars, it was a veteran duo on the front row as George Kostelansky and Mike Nagel brought the field to green.

Kostelansky secured the early lead while Mike Loney and Bud Phillips took Nagel three wide off the start. Phillips would be pinched in the middle through turn one with Nagel taking second, Loney third and Nick Petrilak using the inside to grab fourth as Phillips shuffled back to seventh. With Petrilak, Darwin Greene Sr and Phillips packed tightly together into three contact was made between Phillips and Petrilak, leading to a 6 car pileup before the first lap could be completed.

Kostelansky took the outside for the restart as Nagel led down the frontstretch. Kostelansky ripped the outside, moving back into the lead off turn two. With Vauter, Phillips and Brian Malcolm 3 wide for fourth, Vauter snuck under Loney and grabbed the third spot away using Loney as a pick for Phillips. Malcolm muscled his way under Phillips to move into the top 5 on lap four. Lap five had Loney, Nagel and Vauter 3 wide off of four with Vauter on the extreme bottom to take second down the frontstretch. Malcolm slipped under loney to collect the third spot with Tonkin in tow as the field worked lap 8. Vauter made a move for the lead, rolling the bottom to get under Kostelansky on lap ten. He would lead the lap as Nagel came to a stop in turn four drawing the yellow.

Vauter took the inside on the restart as disaster struck for Kostelansky, rolling down the frontretch and pitside with engine failure. Malcolm took over the second spot as Tonkin moved into third. Tonkin made a move on the lowside of turn two to move into second on lap sixteen as the field singled out with ten to go. Tonkin showed Vauter the nose on lap twenty-two looking strong on the inside of the track but lapped traffic would make the difference in the closing laps as the duo worked around Dan Burman who stayed down low. Vauter kept the lead as Tonkin and Burman made contact, costing Tonkin four car lengths. With two to go Tonkin would get the power down pulling alongside Vauter as he powered off the cushion. Tonkin completed the pass as the pair reached the white and sailed off into the night. Malcolm would challenge Vauter for second at the line with Vauter collecting second by half a car length, Hartnett and Alex Tonkin rounded out the top 5.