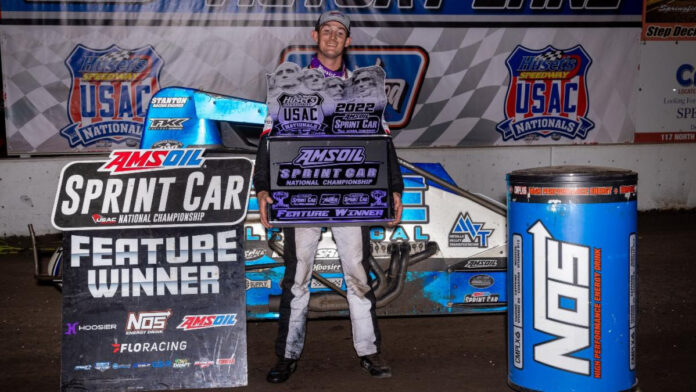 BRANDON, SD – Mitchel Moles had found an unwelcomed companion in heartbreak at Huset’s Speedway over the past two seasons.

The true USAC AMSOIL Sprint Car National Championship Rookie from Raisin City, Calif. was hellbent on slaying that narrative Sunday night during the $12,000-to-win finale during the second running of the USAC Nationals in Brandon, S.D.

At the conclusion of the 2021 opening night midget feature at Huset’s, Moles went third to first on the final lap and was a turn away from victory when the yellow flag was displayed for a spun car, thus denying him his initial win. Two nights prior, in Friday’s midget opener, Moles led a race-high 19 laps before losing the lead, tagging the wall and flipping.

In Saturday’s sprint car feature, Moles was the class of the field until he smacked the wall and flipped on his own while leading with 10 laps remaining, denying him yet again from that seemingly elusive taste of a first USAC national triumph. He entered the final night of the USAC Nationals with 39 total laps led between the two series this weekend, most among all drivers in the event.

Then there was Sunday night, a 40-lap race in which Moles dominated from start-to-finish yet was met with a flurry of late-race cautions that forced him to endure umpteen restart opportunities versus the series’ top veterans, including defending race winner C.J. Leary, throughout the final laps.

Nobody said it would be easy, but even fewer said it would be as daunting of a task as Moles discovered it to be down the stretch after he rolled off from the pole position in his Reinbold-Underwood Motorsports/AME Electrical – Mesilla Valley Transportation/Spike/Stanton Chevy during what was just his seventh career USAC National Sprint Car feature start.

“I think I won that race like three times there,” Moles exclaimed after withstanding a bevy of restarts in the waning laps en route to victory. A night after Ryan Bernal capitalized on Moles’ misfortune to earn his first career USAC National Sprint Car feature triumph, it was Moles’ turn to experience the same reward.

In fact, back-to-back Bernal and Moles victories marked the first time since 2016 that first-time USAC National Sprint Car feature winners emerged in consecutive races. Six seasons ago, nearly to the day, Brent Beauchamp scored at Bloomington Speedway for his first series win followed the next day by first-time victor Carson Short at Tri-State Speedway, both occurring during Indiana Sprint Week.

An invert of 12 placed the top-12 overall in USAC Nationals event points inverted in the first six rows of the feature. Thus, Moles, 12th in the standings, drew the pole starting position, an important aspect that Moles was happy to be the benefactor of.

“Track position was key in this one and drawing the 12 was lucky on our end.”

Moles jumped to the early lead for the second-straight night at the drop of the green while fourth-starting Thomas Meseraull muscled his way to second past outside front row’s Matt Westfall on the back straight on lap five. However, Meseraull’s early surge ended abruptly on lap 11 when he spun sideways between turns one and two, then nailed the infield berm, which stopped him in his tracks. He’d restart on the tail and race back to an eighth-place finish.

While Moles went virtually untouched in the lead, a three-car tussle for second waged on between Eddie Tafoya Jr. Jake Swanson and Emerson Axsom for third, fourth and fifth. On lap 16, Swanson smashed the outside front straight wall with his right rear tire, forcing him to the work area under yellow with damage to the Jacob’s Ladder. Swanson returned and made his way back through the pack to a solid ninth-place result.

Moles worked traffic nearing 10 laps remaining, threading the needle with a bold move in turn one as Axsom hounded him a foot away from his rear bumper. Negotiating the lapped car of Clinton Bruns on lap 30, Leary reeled in Axsom for second and stormed underneath for the position in three and four but still remained eight-tenths back.

Then came the succession of yellow flag periods, starting on lap 33 with Logan Seavey (8th) slowing in the middle of the track with a right rear tire problem. Leary took a shot at Moles in turns three and four on the lap 34 restart, sliding side-by-side alongside through the corner, but Moles escaped with the lead in his possession.

Brandon Mattox (16th) slows to a stop in turn three with a right rear tire issue on lap 38 while Bruns (19th) slowed on the front straight in a ball of flame on the final lap and Bernal (6th) crashed into the outside wall on the first green-white-checkered attempt, forcing Moles to start over from scratch time and time again in order to keep the rabid pack behind him on each subsequent resumption of action.

Nonetheless, none of it rattled Moles, and on take two for the green-white-checkered, Moles knew what was coming and expected Leary to deliver the heat. Leary managed to pull even with Moles entering turn one as soon as the green dropped, but Moles thwarted Leary in this round, which came a month-and-a-half after Leary tracked down then first-time series starter Moles for the lead and the win in May at the Terre Haute (Ind.) Action Track.

This time, however, played out differently for Moles as he fended off Leary to claim the top prize ahead of Leary, Axsom, Brady Bacon and Robert Ballou.

“I felt like C.J. was eventually going to drop a bomb and that was his hope there on the restart,” Moles recalled thinking prior to the last restart. “These guys on this team gave me a great racecar and I can’t thank them enough for everything they do.”

C.J. Leary (Greenfield, Ind.) came up one spot short of repeating his Huset’s final night victory from 2021, charging from ninth to bring home second in his Michael Motorsports/Kodiak Products – Gray Auto – Highsmith Guns – DMI/DRC/Chevy. This all came after the team made wholesale changes to the car overnight, including a swap from a Ford to a Chevy engine underneath the hood.

Emerson Axsom (Franklin, Ind.) read it right on this night following back-to-back ninth-place results on nights one and two. He earned his best career Huset’s finish of third to round out the podium in his Clauson Marshall Newman Racing/Driven2SaveLives – ZMax Race Products/Spike/Kistler Chevy.