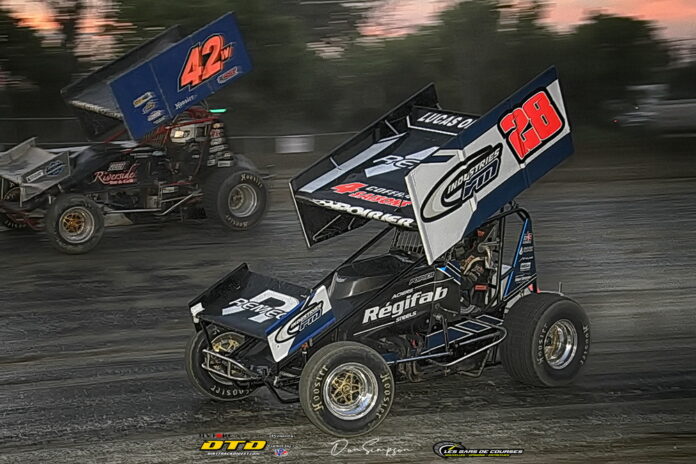 CORNWALL, ON – Cornwall Motor Speedway concluded its busiest week of the season with a 3rd event in 7 days as the Southern Ontario Sprints, Race for the Cure Sportsman and Frank Belair Memorial Mini-Stock Series shared the spotlight.

Jordan Poirier showed his great talent in the 25-lap Southern Ontario Sprints as he took the early lead for this third starting position and was never challenged taking some good leads over the field, Poirier went on to win his first feature with this group in 2022 over Tyler Rand.

It is a field of 31 Sportsman that took the initial green in the 50-lap Race for the Cure Sportsman, Ryan Stabler is the early leader as the lead pack quickly joins lap traffic, Shane Pecore uses a slower car to his advantage and takes the first spot on lap 12, Pecore remains strong in front as only Samuel Charland tried a final attempt on a lap 47 restart, Pecore went on to win his second feature of the season over Charland and Bobby Herrington who started tenth.

Marc Dagenais was the early lead in the 22-lap Frank Belair Memorial Mini-Stock Series, the veteran drivers led the first portion of the race when Pierre Picard challenged him and passed him for the lead, Picard was solid in front and captured a third win this year in front of Alexis Charbonneau and Dagenais.

Alex Daneau had a strong showing in 25-lap Mod-Lite event, his car was good everywhere and got first to the checkered flag.

Another big event this coming Sunday as the Quebec-Ontario Challenge is in town for both the 358-Modified and Sportsman as the Lightning Sprints are also on the schedule long with the Pro-Stock and Novice Sportsman.