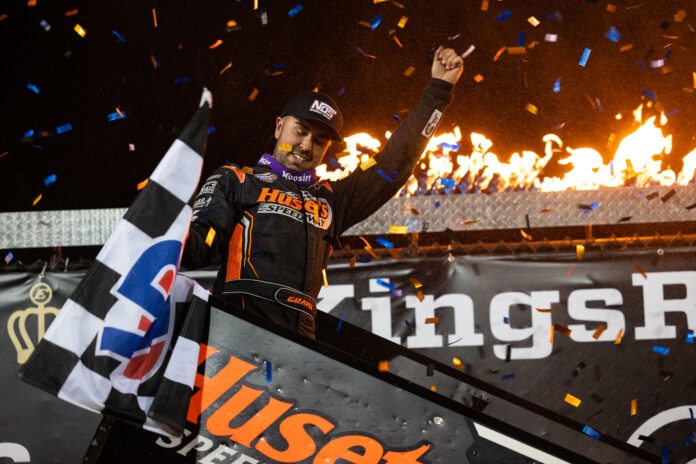 Until Wednesday’s flag-to-flag wiring of the Jokers Wild at Eldora Speedway, the Watertown, CT native had last won a World of Outlaws NOS Energy Drink Sprint Car Series Feature at Perris (CA) way back on March 26. He’s been mighty consistent with 13 top-five finishes over that span, but Victory Lane has seemingly eluded him around every corner.

There was no hiding, nor joking, on the matter tonight, however, as the Kings Royal week officially opened at Eldora Speedway with the Jokers Wild $10,000-to-win preliminary. Gravel grabbed the outside pole after topping My Place Hotels Qualifying, his NOS Energy Drink Heat Race, and finishing second in the DIRTVision Fast Pass Dash.

It wasn’t only Gravel’s 72nd career World of Outlaws win (tying him for 12th All-Time with Jac Haudenschild) and his third of the 2022 season, but it was also his fourth-career victory at Eldora Speedway ahead of Thursday’s $100,000-to-win Historical Big 1 and Saturday’s $175,000-to-win Kings Royal.

“Man, it has felt like forever,” Gravel said. “It’s been a trying season, but we’ve honestly been solid all year, it’s just that we can’t win these races for whatever reason. It’s obviously tough on the morale and such, but I told Cody [Jacobs] we just have to keep working together and stick to it. You have to be on your A-game every single time you’re on the track against these guys.”

Although the 26-race winless streak doesn’t look or feel great, it’s noteworthy that the consistent championship contender in Gravel has risen the #2 up to second in points (-48) and the season is yet to be halfway through.

“It’s a long season, I know that,” Gravel continued. “We’re not even halfway yet, so I think we can do some damage. If we start rattling off some streaks, we could be the new team to beat out here.”

Rolling from the outside pole with Justin Peck to his inside, Gravel assumed the early command of the lead and never relinquished it through 25 fast-paced laps in Rossburg, OH. Following a caution on the initial start, 21 consecutive green flag laps ensued before a pair of stoppages created for a green-white-checkered finish.

Gravel kept the #2 pinned to the mat and rode off into the distance for the Jokers Wild win, a crucial confidence-builder before trying to add the Historical Big 1 or Kings Royal alongside the Knoxville Nationals and National Open on his resume.

Carson Macedo of Lemoore, CA had a chance at Gravel on the final restart, but fell slightly short and settled for a second-place finish. The Jason Johnson Racing, Albaugh #41 is now tied for the most podium finishes (13) this season with the World of Outlaws. After winning both preliminary shows last year, the rising star came bound and determined to escape Eldora with the big bucks this weekend.

“My car was really as good as it could’ve been,” Macedo noted. “I felt off in the Dash, but Phil [Dietz] did what Phil does best and gave me a perfect race car. I thought before the caution came out that I was reeling him in through traffic, but he found clean air on the restarts and would get away each time.”

Finishing out the podium with a third-place effort was Brian Brown of Higginsville, MO aboard the Casey’s General Stores, FVP Parts #21. The six-time World of Outlaws winner continued his impressive recent stretch of results at the Eldora 1/2-mile, earning his third podium in his last five starts at the track.

“I think we had a car capable of winning, but the driver failed to make the right adjustments from inside the cockpit as the race went on,” Brown admitted. “Coming here against 55 cars and finishing third is one hell of an accomplishment for our team, though. There’s no shame in running third to two of the best guys in the world.”

A pair of hopeful first-time winners rounded out the top-five at Eldora Speedway as Justin Peck of Monrovia, IN scored fourth in the Tom Buch #13, and Kasey Kahne of Enumclaw, WA claimed fifth aboard his own FuelMe, Karavan Trailers #9.

Closing out the top-10 on Wednesday night was Rico Abreu in the Rowdy Energy #24, Donny Schatz in the Ford Performance #15, Brad Sweet in the NAPA Auto Parts #49, Giovanni Scelzi in the Aspen Aire #18, and Ayrton Gennetten in the Fischer Body Shop #3.

UP NEXT (Wed-Sat) – The World of Outlaws NOS Energy Drink Sprint Car Series keeps going at Eldora Speedway with Thursday’s $100,000/Win Historical Big One, and then Friday’s The Knight Before leads into Saturday’s $175,000/Win Kings Royal. Fans can BUY TICKETS HERE, or watch every lap LIVE on DIRTVision.